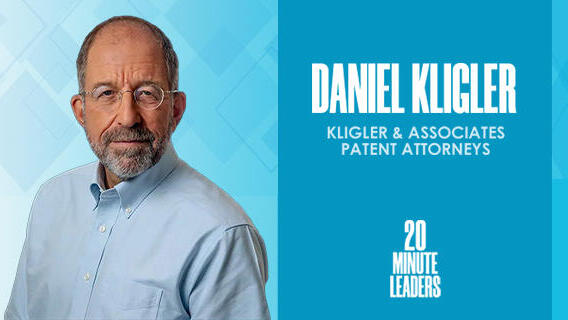 “Entrepreneurs need to consciously set aside a certain fraction of their attention to patents.”

As an entrepreneur in a company with great patents, Daniel Kligler learned that having those patents is not a guarantee of success.

As an entrepreneur in a company with great patents, Daniel Kligler learned that having those patents is not a guarantee of success. He shares that a company’s patents need to fit its market and further its strategy. Through his exposure to patents in that role, Kligler got an opportunity to train as a patent attorney and found his true passion. Now senior partner at Kligler & Associates, he enjoys getting to learn about new technologies from leading inventors and using his technology and business background to write good patents. Kligler explains that even if patents may seem boring, it is crucial for entrepreneurs to give them attention since patents can add to the company’s valuation. Another part of the job he is passionate about is helping his clients on their journey. He says he gets satisfaction from his clients’ success and helping them avoid some of his past mistakes.

Daniel, tell me about yourself and your trajectory coming into the patent world.

I started out as an electrical engineer and an inventor. I was in academia for a while. I was involved in two startup companies, neither of which did very well. But in the second company, I was the VP R&D and I was responsible, among other things, for our patent portfolio. We had great patents. We were in digital video before the field really developed. I thought, "We have great patents; we will for sure be successful." But we didn't really understand that patents aren't everything. You need to fit in the patents with your market; patents need to serve your strategy.

As the person responsible for the patents, I got to know our patent attorney very well. When I left the company, he invited me to come and train to be a patent attorney in his firm. My impression of patents as an inventor was that they were terrible, boring, hard to read. I couldn't imagine it would be interesting. But I said, "What the hell," and I went and started training as a patent attorney. It took about two weeks to realize that this was the job that was made for me. It's a great job because you get exposed to all different sorts of technologies. You get exposed to the most advanced things from the people who are leading in the fields. So it's endlessly interesting.

Share with me what changed in your perspective about patents. Why are they something that you're so curious about and something that's so fulfilling for you?

The majority of patents are just not good. They're written by people who don't really understand what they're writing. A good patent starts off with good technical writing. It starts out with understanding the technology. If you don't understand the technology, then your patent isn't going to create the kind of value that you want it to create. The point of a patent is to capture your strategic technology in a way that you can monopolize and keep your competitors from copying you. You need to know what you're writing. Then you need to understand how to explain it to the examiner in the patent office.

One of the advantages of our firm is that I'm a technology person, and the other is that I have business experience. I learned from my mistakes. I can say, "I know what I did wrong and I can help you avoid that." Those are two things that are really important in writing a good patent: understanding the technology and understanding the business.

What could be a strong impact of having a good patent?

One of the clients that I most enjoyed working with was PrimeSense. They developed the first compact cheap consumer 3D camera. Microsoft wanted to build this 3D camera, this 3D console. And they failed. This group of young guys in PrimeSense had figured out a new way to build a small, cheap, and very reliable 3D camera. We got great patents for them, patents that pretty well closed off their particular approach. When Microsoft went to build the first generation Connect, they had to buy their cameras from PrimeSense. But then Apple came along looking for 3D camera solutions, and they eventually bought PrimeSense for, I think it was $450 million roughly, a lot on the strength of their patents, which now belong to Apple. Basically, when you're a small company, if you're successful, the big players are just going to see what they can do to kick you out of the way. If you've got good patents, it becomes more expensive for them to try to work around you than to buy you, so they buy you.

Tell me about why this is almost a calling for you and why this work speaks directly to Daniel Kligler.

I'm a technology jock. I just love learning about new technologies. And as a patent attorney, I get paid to do that. So that's a great thing. The other thing that really speaks to me is the entrepreneurial side. The possibility to help these people along the road, to give them a perspective that they don't have about the intellectual property side of their business and how it fits into their business strategy, that's very rewarding for me. It's a very specific sort of mentoring that I really enjoy. Seeing my clients’ success is just very rewarding and it's as satisfying for me as though it were my own success. One of my clients told me that even though he is a small company, he sometimes feels like he's our only client. That's how I want the clients to feel, like they have all our attention.

For companies and founders, engineers, inventors, how do we position ourselves to be successful with protecting our inventions in today's world?

Entrepreneurs and also engineers are always overworked. Their attention is torn in many different directions. An engineer will naturally want to spend his time developing the product. Patents are boring, at least to the engineers. What's fun is inventing. The entrepreneur needs to consciously set aside a certain fraction of his attention. Investors will insist that he does because investors know that patents create long lasting value. Patents will add to the company's valuation.

We try to reduce the load on inventors. There's also a trade-off there. We need to get inventors to tell us as much information as they can because more information makes a better patent. But on the other hand, we know inventors are busy, so we also try to help clients prioritize.

As we transition into what feels like a new world, in software and artificial intelligence and deep learning, how do we even know what is defensible in a patented way and what is not?

Since you mentioned artificial intelligence, it's one of the really difficult areas to get patents and to get patents that are worth anything. There are two issues with patents. Can you convince the patent office to give you a patent? And will you actually be able to tell if your competitors are copying or using your patent? When it comes to AI, that's really hard. Because most of the secret sauce is buried deep in the code. You won't be able to tell if your competitors are using the algorithm that you invented and patented. It's very important in those worlds not only to find things that are actually a technological advance and can be protected but also find things that are detectable. One of the questions I always ask inventors is, "How are you going to be able to tell if your competitor is doing this?"

I've got a client, a company called Nanit; they make crib cameras. What's smart about Nanit is that they use AI to analyze the parent's interaction with the baby in the crib and give the parent tips. We got them some good patents on that. It uses AI to capture and to analyze what the parent is doing. Now there's something external, something that we can see that's outside the heart of the software that if a competitor does it, we have a pretty good job of catching them. That's one example of AI.