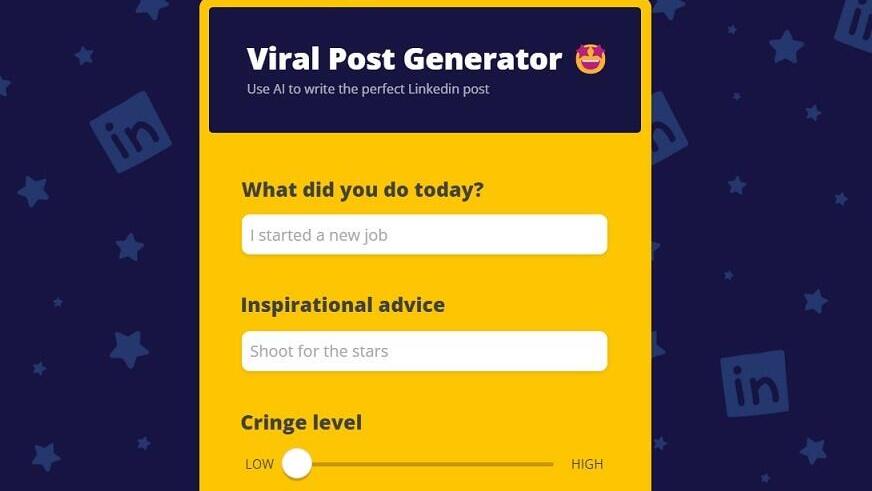 Marketing manager Tom Orbach created a viral post generator for LinkedIn which automatically writes cringe posts. Within a week the generator went viral and earned him a handsome exit after it was acquired by LinkedIn-focused startup Taplio

Tom Orbach was just having a little bit of fun. The Growth Marketing Manager at Israeli startup Mine decided he’d create a viral post generator for LinkedIn that automatically writes cringe posts which the often-maligned social network has become known for.

Orbach used AI to analyze more than 100,000 posts that had gone viral on LinkedIn. He posted the tool on Twitter on August 15 and the rest is history.

“I created the viral post generator for LinkedIn just for fun and without any expectation to make money. The idea came to me when I did some scraping of LinkedIn posts and sorted them according to high engagement in order to reverse engineer them and understand what makes a post viral, and then recreate it (I’m a marketing man)," Orbach wrote on Twitter.

“The common denominator that arose from all the viral posts on LinkedIn was clear: They had a large portion of self-love, even a little narcissism,” Orbach continued. “You have probably heard of the crying CEO who became really viral. It was all of a similar style. The thing is that everyone knows that there is cringe in their feed, but they continue to play the game and provide engagement to these posts.”

Orbach continued and explained how he launched his humorous tool in Hebrew in February 2022, but that it wasn’t until much later that he spent the time to create an English version, which he eventually went live in mid-August. According to Orbach, he initially reached tens of thousands of users a day, but that figure began to decline. However, it was then that he received an offer to acquire the tool from a startup named Taplio.

Orbach said that while he hadn’t initially planned to sell, he did eventually present Taplio with a figure at which he was willing to part with the tool, only to immediately be told that it wasn’t worth that much. Orbach and Taplio ultimately agreed that they’d place an ad for Taplio within the generator to see what impact it could have over a 24-hour period before deciding on a price.

“I had 24 hours to prove that there is high traffic here. I remember wondering ‘where else haven’t I advertised?’ I remembered that there is a Reddit group r/InternetIsBeautiful in which people share cool free tools and within a few hours it reached two million people. But what happened next was the real bombshell. Someone random from Reddit who liked it shared it on Twitter. Within a few hours his tweet reached 15 million people. That was the real breakthrough, with the generator reaching 1.4 million posts really quickly.

“Even before the 24 hours had elapsed, the Taplio founder sent me a message saying he agrees to the initial price I asked for. There weren't even any negotiations, which probably means I could have asked for more, but no matter. I wanted to get rid of it and the emotional stress that came with it,” concluded Orbach.