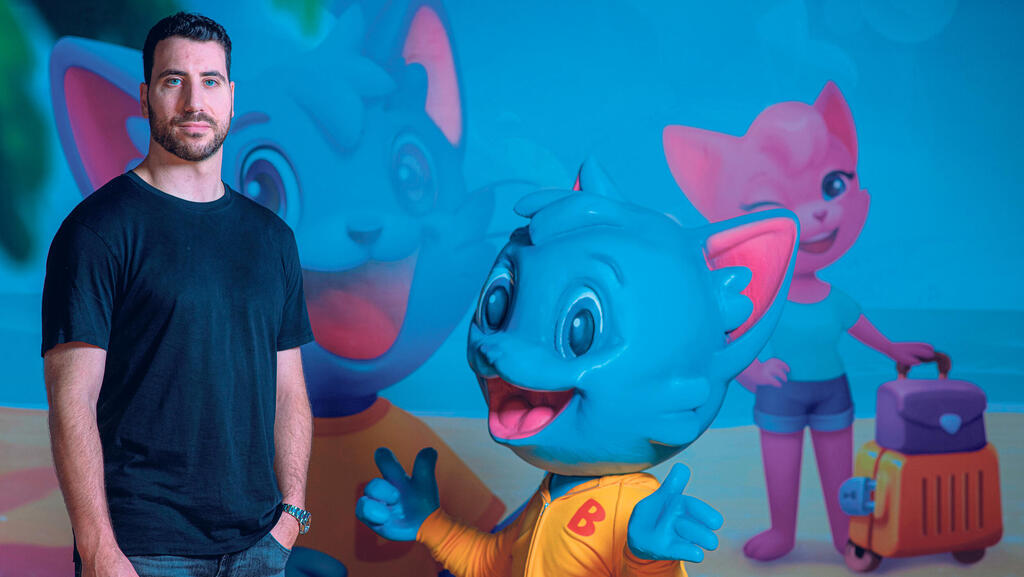 Playtika CSO: "We are looking to acquire companies in distress"

Playtika Chief Strategy Officer, Eric Rapps, talks about the gaming company's investment strategy, what it sees in blockchain technology, and why its staff reflects the Israeli high-tech industry as a whole

This past August marked a turning point in the history of Playtika. The company published Its financial results for the second quarter of 2022, in which it stated that for the first time casual games became its main growth engine – that is, 53% of its revenue came from casual games. These are light games, with simple rules and short game rounds, like “Candy Crush” or “Angry Birds”. This change is at odds with the company’s image: over the years, Playtika was mainly known as a producer of social casino games. These are games of chance such as poker, bingo and slot machines, but without betting real money.

This turnaround did not happen overnight. Through a series of business opportunities, Playtika has acquired casual game makers and helped them grow their games. One of the people responsible for the change in the game mix of the Israeli-founded company is Eric Rapps, Playtika’s Chief Strategy Officer. 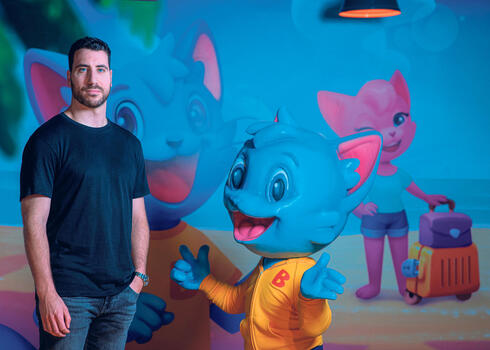 “We expanded into the casual games sector for two reasons,” he explains in an interview with Calcalist. “First, we reached the peak of our strength in the social casino field. We already held 35% of the global social casino market. Second, we felt that our professional knowledge was not necessarily only valid for this genre.”

Playtika was founded in 2010 by Robert Antokol and Uri Shahak, who left the company about ten years ago. Just a year later it was already purchased by the Caesars casino chain for $160 million. Five years later, the company found a new buyer: a consortium of Chinese corporations. Now it will change hands again: In June it was reported that the company would be sold to the Joffre Capital investment fund at a value of $8.5 billion.

“After Caesars, the new owner gave us a mandate to expand. We felt that it would be possible to apply our experience from the social casino field to casual games,” noted Rapps. Playtika’s first purchase in the casual sector was another Israeli company, Jelly Button, for tens of millions of dollars. “When we acquired Jelly Button, we dipped our toes in the water. It was a small deal. The idea was, ‘OK, if we fail, we won’t lose that much money. It doesn’t have far-reaching consequences. If we succeed, we’ll prove our hypothesis.’ Then we could go on a more frequent buying spree.”

“‘Monetization’ (generating revenue from a game) is the easiest buzzword to use. But it doesn’t necessarily represent everything we specialize in. We specialize in game operations. There are several stages in games. First, there is the development stage, where Playtika is not the best in the world “, Rapps admits.

“After the game goes live, there is the game operation stage. In this I think we are the best in the world. Game operation is not only related to monetization and sales management, but also includes managing the game’s economy, managing relationships with customers and customer service. These are all principles that we instilled in Jelly Button after the acquisition. When we saw that it worked, we became much more assertive in our attempts to acquire the next companies we bought. Once we saw that our formula was working, we said, ‘OK, let’s acquire as many companies as possible to put this formula to work.'”

You have now invested in an NFT game. Why is the gaming industry so in love with blockchain?

“I’ll give my opinion on why the industry as a whole supports it, but I don’t necessarily support it myself. There is a segment of the industry that is more geared towards hardcore gamers, who are interested in owning game assets. There are those who say: ‘This asset has real value that I have accumulated and built and I should own it.’ And if you know anything about blockchain history, that’s how Ethereum started. Its creator played World of Warcraft. He played the game for hours to get a certain reward and then the game creators changed the value of the reward overnight. He was angry at this unilateral change, which spurred him to build the Ethereum blockchain.

“Another reason for this change has to do with gaming mechanics that are based on this technology. For example, until today you didn’t have the means to make digital collectibles and verify their uniqueness digitally. These are things that touch the core of our business. Our games have internal collectibles. The ability to embed them is very exciting for us."

The goal is for people to play games to earn money (Play-to-Earn)? In the end, someone is going to lose their money.

“We don’t believe in the Play-to-Earn model. We don’t support it, we don’t think it’s the right business model, because at its heart, it’s speculation and profit. These two things are in opposition to products that can retain players for a long time – and that’s what we focus on. We have games that are 10-12 years old. Our goal is to turn them into games that are 30 years old. The only way to do that is to build a good entertainment experience. If the goal of the game is to make money, guess what? People won’t make money from it for 30 years. There are almost no investors that have managed to do this.

“We don’t focus on that. Assuming that this technology becomes dominant, we are a technology company, and we cannot fall behind. At the same time, this technology makes it possible to create many types of entertainment. In some cases, it is also seen as more modern.”

How does this sit with the fact that using a crypto wallet today is complex for most people? It is not accessible.

“You’re right. Those are the things we focus on addressing. Anything we do is done from a consumer perspective. Opening a wallet and transferring funds is a serious pain. It’s not easy for our user base, which is mostly average American women. We can implement blockchain technology and disguise it to enrich the user experience. We will use our judgment regarding the best gaming experience and sacrifice, if we have to, some of the options that are important to crypto natives.”

Why is blockchain actually essential for creating collectibles?

“It’s not. The short answer is that we can choose to create a centralized collection enterprise. I think what we’re trying to convey is that this is a new, extremely powerful technology, and there’s a lot of adoption of it in the technology community. If we’re going to be the leader in mobile gaming, we have to be the leader in technology and how it affects mobile games. When the mobile industry was hurting, there were many successful companies in the console and PC sectors that really had a hard time switching to it. Why? Because it’s a different format, it’s different real estate on your screen, a different gaming experience.

“Ignoring blockchain is like being in the PC field and dismissing what’s happening in mobile. It’s a pretty stupid decision, isn’t it? You have to have exposure there. We’re not changing direction and turning Playtika into a blockchain company. We’re not giving up under any circumstances the philosophy and principles we had at the heart of the games. All we are doing is experimenting with new technology so we can become experts in it.”

How would you describe Playtika’s investment profile?

“It’s not an open check, but it’s also not defined as $5 million or $10 million per investment. We look less at size and stage. We’re interested in being exposed to new and interesting areas in the world of gaming and interactive entertainment. So if you look at all the companies we’ve invested in to date, they’re all in different sub-sectors of the gaming industry that we think will either disrupt the status quo or represent very large opportunities. For us, it’s an opportunity to learn. Just as I described the acquisition of Jelly Button as dipping our toes before diving in head first —instead of buying something that’s beyond our understanding, we invest In these companies, you get a seat on the board, provide our experts on the operational side. There is a lot of value in that.

“Our goal is for Playtika to be synonymous with games, especially in Israel. The reality is that the game industry is developing in a very interesting way. There are different forms of gaming, of technologies that are applied to operate games. Our goal is to learn about them all, so that we can be the number one player in the West and certainly in Israel. This is the reason for our diversified investment portfolio.”

As an investor, do you notice a decrease in the scope and pace of investments in Israeli startups?

“Valuations have decreased. The pace of investments may have decreased with other investors, but not with us. This is because we are a company that is willing to buy a company in distress or invest in it, because we are very successful game operators. And this is a very big difference between us and other companies. Most of the buyers buy small companies and let them remain independent, even if the game itself is not growing. This is because most companies are not able to improve the operation of the game as we are able to. That is why we have not seen a decrease or reduction in the number of our business opportunities.

“I think that what is unique about Playtika is that when you look at the mix of employees, most of them are not gamers. We have excellent technologists, analysts, and artificial intelligence engineers. Why do I say this? Because our staff reflects the Israeli high-tech industry as a whole. If anyone reads this interview and says, ‘These are just games and I’m not interested in games, so I won’t go work in Playtika’ – they're making a mistake.

“In recent years, we have recruited a lot of 8200 graduates, who usually go into the cyber field. Suddenly, analysts came to Playtika and were amazed at the amount of data that is available here to perform big data analysis. Playtika has a very diverse offering for the Israeli technological ecosystem, and it is related to many industries that people usually do not associate with the gaming industry.”