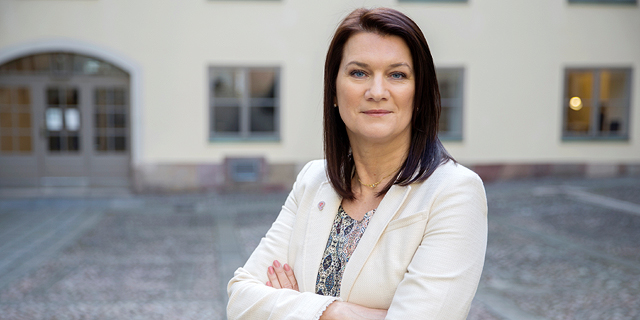 In an interview with Calcalist, Minister for EU Affairs and Trade Ann Linde discusses tax havens for tech companies, Brexit and the status of women in Saudi Arabia

The world’s largest tech companies are “not paying any taxes” and that has to change through concerted global action, Sweden’s Minister for EU Affairs and Trade Ann Linde said in an interview with Calcalist during her visit to Israel last month.

Ms. Linde was dispatched to the country to help connect Swedish companies with Israeli tech innovation.

As a top diplomat representing Sweden in various commercial and political venues, she shared her thoughts on tax havens for tech companies, Brexit, and the expansion of opportunities for Saudi women. Q: France and Germany are formulating a European-wide taxation policy targeting multinational tech companies. What is Sweden’s position on this issue? A: When it comes to the taxation of international tech corporations, we think there has to be a law, because right now these companies are not paying any taxes. But, we prefer it to be global. The work has started and it has come quite a long way in the OECD. The Swedish position is that we have to wait until the OECD has its proposal ready and we'll do it globally and not only in the EU. Q: What are your thought on countries in the EU that act as tax havens for tech companies? A: I have been to Dublin several times and have visited the European headquarters of Facebook and Google and other such companies. As long as we don't have a common taxation policy—which we don't—it is up to each country to have its own policy. At the same time, having said that, we don’t agree with some countries that give very strong tax exemptions or have tax solutions that enable people to avoid paying taxes. We'd like to have a more common view on those kinds of things. Q: With deadlines looming over the negotiations, will Brexit happen as planned? It depends on what you mean by as planned. Do I believe that there will be a Brexit? Yes, I do believe that. If I believe that there will be an agreement? I hope so. Right now it doesn't look very good. On the European side, there's a consensus that there are three issues that have to be agreed upon before we continue talking about how our future relations with the U.K. will look. These are, How much will the UK pay? What would be the rights of EU citizens living in the U.K. and vice versa? And, how will the Irish border look? Right now it is clear that we have not made sufficient progress. I just hope something will change because the clock is ticking. So, I am not very optimistic right now, but it happened more than once in the EU that big problems are solved in the last minute.