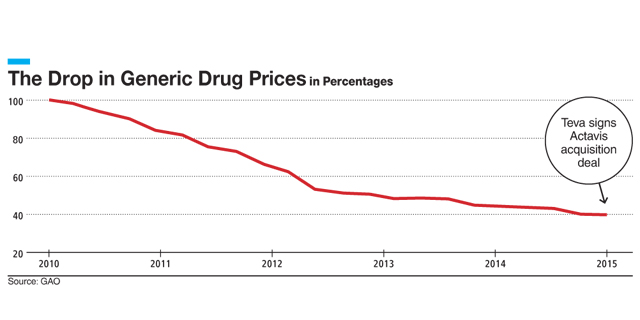 When Teva went full force after Allergan's generic unit Actavis in what has become the company’s most costly acquisition, generic drug prices were already falling.

In hindsight the information was out there. When Teva went full force after Allergan's generic unit Actavis in what has become the company’s most costly acquisition, generic drug prices were already falling.

Earlier this month, Teva Pharmaceutical Industries Ltd. announced plans to let 14,000 employees go in the next two years. The company elaborated on previous statements made by its new CEO Kare Schultz, detailing how it will divest many of its production lines, doing away with products with low profitability.

Completed in 2016, the $40.5 billion acquisition of Actavis piled a heavy debt on Teva. Combined with a decline in generic drugs prices, it brought down Teva’s sales and plunged the company into its worse situation in over a decade. According to official reports by the U.S. Government Accountability Office (GAO), based on data collected from the governmental national social insurance program Medicare, the downward trend of generic drug prices started as early as 2010. In fact, between the first quarter of 2010 and the second quarter of 2015, when the Teva-Actavis deal was being negotiated, generic drug prices fell by 59%. This was long before Mylan's EpiPen price hike caused the outcry that prompted both Hillary Clinton and later Donald Trump to launch an offensive against drug prices in their presidential campaigns.

The conditions set for the deal by the European Commission were another reason for pulling the breaks. According to the terms set for the acquisition, Teva had to divest a larger than expected share of its most profitable businesses and products.

Every deal of the sort signed between Teva and Allergan has a cancellation fine included. In hindsight, the $2 billion fine Teva would've had to pay seems miniscule, especially for Teva as it was then. In fact, the company could have handily used the terms put forward by the commission to waive the fine.

But the deal was just a symptom of the underlying condition of the struggling drugmaker. Teva has been mismanaged for years. Compliments paid to the company's previous chief executives regarding their successful acquisition strategy turned out to be empty platitudes. Teva devoured and swallowed everything it could: it did not utilize its new assets beyond growing an already overly large drug portfolio. The billions in revenues generated by the company’s money-making multiple sclerosis drug Copaxone, which has seen repeated price hikes, hid the dysfunctionality of the company’s board.