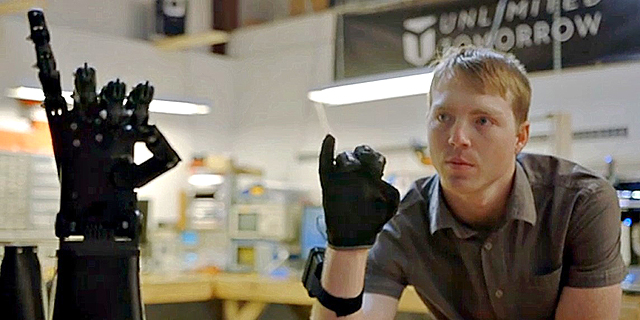 Nasdaq-listed Stratasys Ltd. is teaming up with multinational 3D software company Dassault Systèmes and robotics innovator Easton LaChappelle on a prosthetic arm Initiative, the company announced Monday. The companies will collaborate with Unlimited Tomorrow, an organization founded by Mr. LaChapelle to provide amputees with affordable, custom-made, battery-powered prosthetic limbs, created using 3D scanners. The limbs can then be printed in 3D printers around the world, enabling the organization to reach patients globally.

Mr. LaChappelle, a 22-year-old robotics engineer and NASA employee, founded Unlimited Tomorrow when he was 18.

Established in 1989 and dually headquartered in Eden Prairie, Minnesota and Rehovot, Israel, Stratasys is a leading manufacturer of 3D printers and production systems for industries including aerospace, automotive, healthcare, and consumer products. In 2012, the company merged with Objet Ltd., a privately held 3D printer manufacturer based in Israel. Stratasys has around 2,500 global employees according to its 2017 financial reports. In 2013, the company acquired New York-headquartered, 3D printmaker MakerBot for over $400 million, but since then the new subsidiary has hit a snag, undergoing several significant layoff cycles and relocating its manufacturing operations to China in 2016. In February 2017 the subsidiary announced a reorganization plan. Affected by weaker than expected consumer sales that followed a market hype, the company’s stock price dropped almost 90% between September 2014 and February 2016, to $15.6. Stratasys’ stock traded at $20.21 on Monday market close.

According to Minneapolis, Minnesota-based Arms Within Reach Foundation, a non-profit organization assisting upper limb amputees, most arm prosthetics cost between $30,000 and $80,000. Most prosthetics have an average life span of three to five years, and the exchange rate can be more frequent for children who are still growing.

As part of the partnership, Stratasys will be the exclusive provider of 3D printing technology for the organization, and will collaborate with the organization on research, development and production of prosthetics.