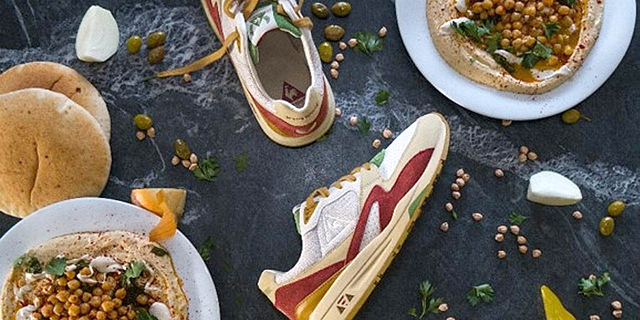 A Sneaker Design Inspired by Hummus

Sneakerbox, a Tel Aviv-based sneaker and fashion boutique, has revealed a special edition sneaker with an unusual aesthetic inspiration. The sneaker is modeled after a plate of hummus, the ubiquitous Middle Eastern chickpea-based dish that has been at the heart of a culinary culture war between several countries in the region, each claiming hummus as their own.

Hummus, a popular dish in Palestinian, Lebanese, Syrian, and Egyptian cuisines, is made from slow-cooked, mashed or pureed chickpeas, flavored with olive oil, lemon, tahini, and spices. It was adopted wholeheartedly by Israelis, many of whom trace their origins to the Arab world and share in its culinary traditions.

Hummus certainly did not shoot to fame based on its aesthetic appeal but the designer nevertheless managed to find inspiration in the dish’s beige hues and mushy texture. The shoes feature beige suede and canvas, with accents of mustard, blood-red, and green, representing the warm chickpeas, paprika, and parsley that often garnish the dish.

Sneakerbox revealed the hummus sneaker, dubbed the LSC R800 “Hummus,” in a post to the store’s Instagram account last week. The limited edition shoes—only 200 pairs were made—were produced by French activewear company Le Coq Sportif. 85 pairs are set to go on sale in Tel Aviv on Friday, with additional pairs slated to be sold in countries such as Australia, Japan, and South Africa. The shoes will be priced at $185 a pair, according to online magazine HighSnobiety.com, which reviewed the shoes last week, stating they looked “Tasty AF.”

“I’ve been in the sneaker business for 20 years, and this is one of my biggest dreams coming true,” Sneakerbox owner Ohad Lahav told Calcalist.