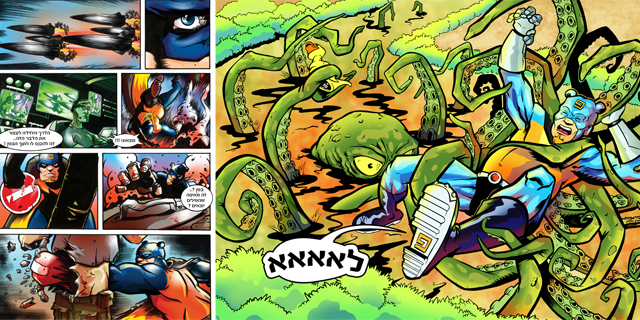 A far cry from your usual superheroe, Israel’s Falafelman, is a patriotic chubby redhead who fights his enemies with hot oil and Falafel balls

Falafelman is an unlikely Israeli superhero with bright red hair, freckles, and a few extra pounds centered around his midsection. He cannot fly and is not exceptionally fast, but can shoot hot oil and throw falafel balls, the fried chickpea patties which are Israel’s national dish.

“I wanted to smash all the existing myths evolving Israeliness,” wrote Ms. Maya-Gur in a blog post published in 2010. “Israeli culture values heroes who do not have any special powers. They are mere mortals, only with striking character traits such as pioneership, initiative, vision, and decisive intelligence employed for the protection of Israel.”

On Wednesday, the Israeli Cartoon Museum in Holon, around 7 miles south of Tel Aviv, will launch a retrospective of Ms. Maya-Gur’s work.

“There are the international superheroes who are fit and handsome and have amazing powers,” Ms. Maya-Gur said in an interview with Calcalist. “Falafel Man is a chubby redhead. He is an unconventional hero.”

1.
Arabs are insulted merely by Jewish presence.
Israelis usually don't throw falaffel, not anything else either, suffices to show presence and fearlessnes.