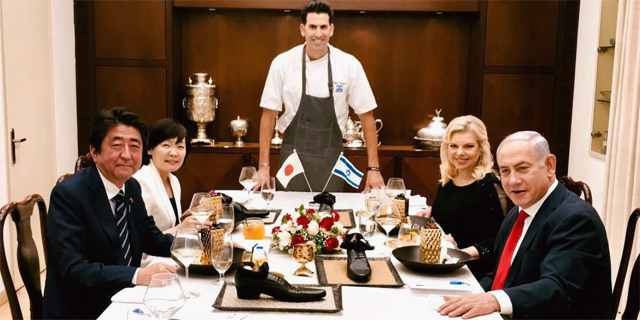 The formal dinner that Benjamin and Sara Netanyahu hosted for visiting Japanese Prime Minister Shinzo Abe and his wife Akie last week ended with a dessert of chocolates—served in a metal shoe.

The person responsible for the unusual creation is Segev Moshe, a celebrity chef who serves as a personal cook to the Mr. and Ms. Netanyahu. He matter-of-factly posted photos of dessert to his Instagram account. Outrage and condemnation followed.

Some Instagram users commenting on the post noted that shoes, in Japanese culture, are seen as particularly dirty. Others snapped back that one doesn’t have to be Japanese to be grossed out by the idea of a shoe on a dinner table.

One person described the faux pax as so unbearable that the chef has become “an enemy of people.” Mr. Abe’s visit was his second to Israel as prime minister. He discussed the Iran nuclear deal, Israel-Palestinian talks and the Iran nuclear deal with Mr. Netanyahu. The Japanese delegation also included business executives. The visit comes at a time of increased economic ties between the two countries. “That’s a diplomatic-grade blunder!” wrote another user. “What, did you think they would go back home and tell people, ‘We ate dessert out of a shoe in Israel and it was amazing’?” It is unclear if Mr. Abe was personally disturbed by the gesture, but diplomats, both Israeli and Japanese, took offense on his behalf. "This was a stupid and insensitive decision,” a senior Israeli official told Israeli daily Yedioth Ahronoth. “There’s nothing more disgraceful than a shoe in Japanese culture. Not only do they not enter their homes with shoes on, you won’t find shoes in offices, either... It’s like serving a Jewish guest chocolate inside a dish shaped like a pig.” Yedioth also cited an unnamed a Japanese diplomat as saying that shoe dessert was offensive. A spokesperson for Mr. Segev released a statement describing him as an “especially creative chef” offering “extraordinary culinary experiences.” The dessert represents of Mr. Segev’s unique “culinary and artistic language.” “The dessert included pralines made of gold and white chocolate, and as a gesture to the Japanese prime minister, seaweed was also used,” the statement said. “The dessert was served inside a sculpture by the international artist Tom Dixon that’s on display in the world’s most important museums...This was an object of art made of a metal cast in the shape of a shoe, and not a real shoe, of course. The two prime ministers and their wives were very excited about the meal and the dessert in particular. They clapped their hands and praised the chef.”

Mr. Abe invited the chef to Japan, according to the statement.

12.
Shoe Show
Sad or funny? Funny or futile. It could have been another chapter of "The Travels of Gulliver", like the story of "Little-Endians" and "Big-Endians" (who broke their eggs at the larger end) who make war. Or an addendum of this Shakespearian comedy, "Much Ado About Nothing."
11.
Does Netanyahoo care?
for a high level diplomatic meeting - this shows either a high degree of incompetence by Israeli officials OR a deliberate offense. Hope it is simply a high degree of incompetence, not contempt... but you never know.
10.
Reader
“Disturbed,” not “distributed.”
9.
Mr.
I love the Israelis and admire them for their ingenuity, grit and determination. However, their current leader Netanyahu is an arrogant slime, who plays the Jewish card in the US and gets their support to feed his egotistical intentions. If Hitler and the Nazis are evil monsters, under Netanyahu... he and the Israelis are fast becoming one in their persecution of the Palestinians.... The sad fact is Trump supports this.
8.
Show Dessert
The the right shoe in ancient Israel signified acceptance of a deal between two parties. Its a shame those offended do not read The Holy Scriptures. Joshua removed his shoe to claim the land of Israel when he lead the children of Israel across the Jordan. Boaz also did the same to claim Ruth the Moabitess as his wife. He inherited her from Naomi's son who has passed away in the land of Moab. It is quite acceptable to be served this dish to represent that acceptance of whatever discussion both Prime Ministers discussed.
All Comments