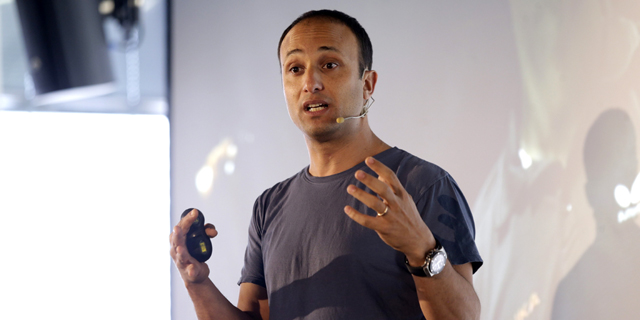 According to Jonathan Adiri, founder and CEO of Israeli medical startup Healthy.io, there’s a thread connecting space rockets, fake news, and artificial intelligence: all are experiencing a technological boom, which has made them more advanced, and more affordable, than ever before, Mr. Adiri said. “We have reached an era in which the tech boom has caused a dramatic decline in costs,” he said.

Mr. Adiri spoke on Tuesday to young entrepreneurs at an event hosted in Tel Aviv by Calcalist and Psagot Investment House Ltd. A former chief technology officer for late Israeli President Shimon Peres, in 2012, Mr. Adiri was nominated as a "Young Global Leader" by the World Economic Forum.

Healthy.io’s technology transforms regular smartphones into devices that perform medical urine analysis using computer vision algorithms, artificial intelligence, and the smartphones’ built-in camera. Using Healthy.io’s app, users can test for infections, chronic illnesses, and pregnancy-related complications. The company was founded in 2013 and is based in Tel Aviv. In April, Healthy.io announced it has partnered with the American National Kidney Foundation and Pennsylvania-based Geisinger Health System to offer its smartphone-based urine tests at home. The three launched a clinical trial that month to test the technology among Geisinger’s patients.