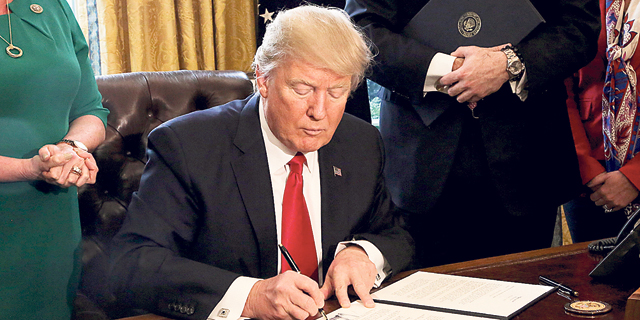 No Steel and Aluminum Tariff Exemptions for Israel Under Trump Administration

Israeli officials met with the assistant United States trade representative for Europe and the Middle East, to discuss the subject earlier this week

Update: Israeli Prime Minister Benjamin Netanyahu has asked Ron Dermer, the Israeli ambassador to the U.S., to promote tariff exemption for Israel, one person familiar with the matter told Calcalist on condition of anonymity. As of now, his efforts are not bearing fruit, the person said.

Israel has failed to secure an exemption from the 25% steel and 10% aluminum tariffs recently imposed by the U.S., according to a Monday post by the Manufacturers Association of Israel (MAI). The decision has the potential to deal a significant blow to the Israeli metal industry, as the U.S. is Israel's largest goods export market.

According to data from Israel's Central Bureau of Statistics, Israeli export to the U.S. is almost twice the U.S. export to Israel, and the U.S. goods trade deficit with Israel is around $10 billion a year (for the past four years). The U.S. is Israel's largest goods export market, accounting for 29% of Israeli export. Out of the $11.3 billion worth of goods exported from Israel to the U.S. in 2017, the local metal industry accounted for $414 million, according to the Israel Export Institute, a government agency intended to facilitating trade.

In April 2017, U.S. President Donald Trump directed secretary of commerce Wilbur Ross to launch an investigation into whether steel imports are a threat to national security, based on a rarely-used provision of the Trade Expansion Act of 1962, which granted the president the authority to negotiate tariff cuts of up to 80%. Under international rules, the U.S. is permitted to make changes to its tariffs for national security reasons, though arguably this is a broader interpretation.

Trump signed off on the aforementioned tariffs in March, tweeting "trade wars are good, and easy to win." While some allies initially received temporary exemptions, on May 31 the U.S. has decided not to extend them for Canada, Mexico, and the European Union, while granting permanent exemptions for Australia, Argentina, Brazil, and South Korea. In retaliation, China slapped the U.S. with $34 billion-worth of tariffs, Canada announced tariffs on over 100 U.S. products, the EU set the retaliatory tariff price-tag at $3.4 billion, and Mexico also announced tariffs, mainly on agricultural products. The U.S. and Israel signed a free trade agreement in 1985, the first such agreement signed by the U.S. in 1995, all Israel-produced products considered reduced-duty under the agreement became duty-free. A spokesman for the Israeli Ministry of Economy told Calcalist that there is still no final answer regarding Israel's exemption or inclusion in the tariffs. Ohad Cohen, head of the Ministry's Foreign Trade Administration, met earlier this week with Daniel Mullaney, the assistant United States trade representative for Europe and the Middle East, to discuss the subject. According to MAI, its head of the foreign trade division Dan Catarivas also met with Mullaney, stating his disappointment with the decision not to exempt Israel despite the close relationship between the two countries. Catarivas emphasized the damage the decision will cause to the Israeli economy, and especially to the local metal and aluminum industries, for which he defined the decision as a "death blow." The American one-sided actions create much uncertainty, he told Mullaney. MAI stated that Mullaney told Catarivas that the purpose of the changes in the U.S. is to reduce the countries trade deficits, as part of a larger trading policy helmed by the administration, such as the renegotiations of the North American Free Trade Agreement (NAFTA).

When Trump met in May 2017 with Israeli President Reuven Rivlin, he stated an intention to balance U.S.-Israeli trade, telling Rivlin "I’m going to try and narrow that trade deficit just a little bit, is that okay?” At the time, Israeli officials estimated that he will not attempt to make changes to the free trade agreement between the two countries.

2.
US-Israel "Free Trade" agreement is America's worst bilateral FTA
If you look at inflation adjusted cumulative deficits, the 1985 FTA, boosted by a bit of AIPAC-Israeli Ministry of Economics espionage against US industry, makes it the worst performing bilateral. See: https://www.irmep.org/06202019_ILFTA.html US "exports" to Israel are, in reality, returned Israeli diamonds, which are Israel's biggest export to the US.
1.
TARIFFS
TRUMP WILL RUIN BOTH ECONOMIES...GIVE HIM TIME