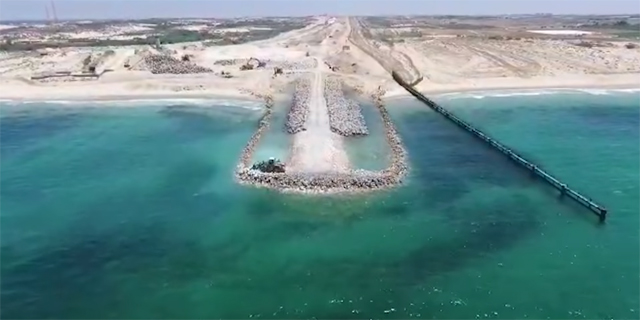 Currently under construction, the 200-meter long 50-meter wide barrier is scheduled to be completed by the end of 2018

Two months after its construction began, earlier this week, Israel’s Ministry of Defense released first footage of the sea barrier it is building along the country’s border with Gaza. The 200-meter long 50-meter wide barrier is located near Zikim, a kibbutz bordering Gaza in Israel’s south. A 6-meter high fence and additional security measures will be installed on the barrier by the end of 2018, the ministry said in a statement.

The barrier is being built in the location where during the Israel-Gaza conflict in 2014 the Israeli military killed a group of Hamas militants it claimed had infiltrated Israel by diving from Gaza. Violence between the Palestinians and Israel has gained momentum late March, when Gazans started marching towards the fenced border with Israel in a series of protests calling for the right of Palestinian refugees to return to their lands in Israel.

By the end of July, over 155 Palestinians had died by Israeli fire and thousands were injured, according to the Palestinian health ministry in Gaza. Israel has called the demonstrations an intentional provocation, claiming Hamas is paying civilians to take part in them, making the militant organization responsible for the bloodshed.