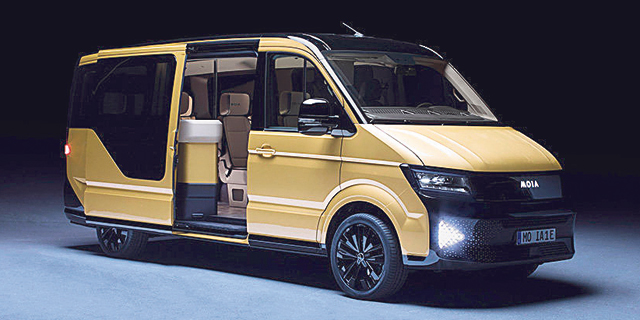 Update: a spokesman for Moia stated the company will not provide cars for the venture

Volkswagen Group-affiliated mobility service Moia will be providing the shuttles for Volkswagen's autonomous taxi venture with automotive chipmaker Mobileye, set to launch in Tel Aviv later this year, according to people familiar with the matter who spoke with Calcalist on condition of anonymity.

A spokesman for Moia stated the company will not provide cars for the venture.

Volkswagen, Mobileye, and Israeli car importer and distributor Champion Motors Ltd. announced the venture in October, stating their intention to have level-4 autonomous robotaxis on Israel's roads as early as 2019 and attain full commercialization by 2022.

Jerusalem-headquartered Mobileye, acquired by Intel in 2017 in a $15.3 billion deal, will supply the level-4 autonomous vehicle kit for the robotaxis—hardware, safety software, driving policy and map-related data. In 2016, Volkswagen announced it had invested $300 million in Israel-based taxi-hailing company Gett Inc. A market leader in the Israeli market, the absence of Gett from the October announcement by the German car manufacturer stood out: in December, German weekly Der Spiegel reported Volkswagen has cut its investment in Gett due to the latter’s inability to gain market traction. Mobileye co-founder and CEO Amnon Shashua said the three partners did not need a fourth wheel. "Volkswagen supplies the vehicles, Champion Motors is in charge of the logistics, including charging stations, and the three of us together are building the service,” he said. Moia operates a shuttle service using electric vehicles developed by Volkswagen. The company’s shuttles are expected to start operating in Israel in 2020, the people familiar with the matter said. The shuttles are already being piloted in Hamburg, Germany. For the first three months of their deployment, Moia's robotaxis will have human drivers to monitor operations and document the vehicles' behavior, including any mistakes and problematic situations, the people familiar with the matter said. Volkswagen has already approached Tel Aviv to reserve dedicated spaces for charging stations and for maintenance of the vehicles, the people familiar with the matter said. A delegation of Volkswagen Group senior executives will arrive in Israel to meet government officials next week, according to the people familiar with the matter. The meetings will also include representatives from Mobileye, Champion Motors, Tel Aviv's administration, and Israel Police, they said.

Champion Motors declined to comment. Tel Aviv is setting up a steering committee for the venture, a Tel Aviv City Hall spokesman said in a message sent to Calcalist. Volkswagen and Mobileye have yet to reply to a request for comment.