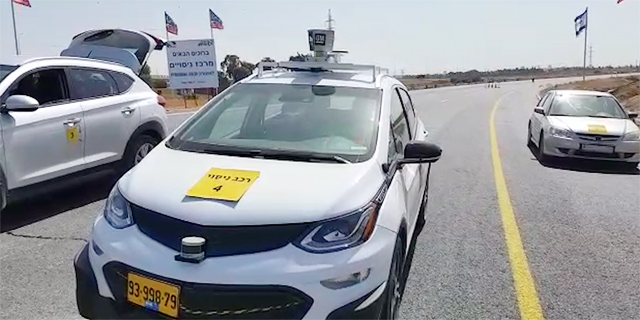 Israel is home to 500 to 600 automotive-related companies, around a fifth of which focus on autonomous technologies, according to KPMG

Israel is a hub of autonomous vehicle technologies, but when it comes to readiness for the future car it ranks below the median. A 2019 Autonomous Vehicle Readiness Index published by global accounting firm KPMG placed Israel in 14th place out of 25 countries surveyed.

In 2017, Intel acquired automotive chipmaker Mobileye, turning the latter’s Jerusalem headquarters into its global center for driverless cars operations. Automakers including General Motors and Mercedes-Benz are developing autonomous technologies in the country, and Volkswagen has recently partnered with Mobileye on a robotaxi service intended to launch in Israel later in 2019.

This is the second time KPMG publishes the index, which assesses readiness for autonomous vehicles by using four main parameters: policy and legislation, technology and innovation, infrastructure, and consumer acceptance. As countries progress towards the adoption of autonomous vehicles, the report’s authors state, the technology will have a significant impact on a variety of sectors and industries—policing, insurance, healthcare, power generation and power grids, entertainment and advertising. The Netherlands and Singapore came in at first and second place, respectively, as they did in 2018. The Netherlands earned its place mainly to its government’s active legalization and policy making and its focus on autonomous public transportation. For Singapore, the report’s authors stressed the strength of the country’s innovation and research. Israel’s relatively low ranking was a result of low scores on policy and legalization (18) and infrastructure (21). The country ranked first out of the 25 locations surveyed on technology and innovation. Much of Israel’s “outstanding performance” in this category is a result of the military background of many of its entrepreneurs, according to the report authors. Comparatively, the Netherlands came in 10th and Singapore ranked 15th on the technology and innovation, but both countries came in the top spots for the three other parameters. Israel has 500 to 600 automotive-related companies, KPMG notes, and around a fifth of them focus on autonomous technologies. Daimler and Volkswagen subsidiaries Skoda and Porsche invested in Anagog Ltd., a Tel Aviv startup whose AI technology can track drivers and predict their needs based on data from their mobile phones.

General Motors is testing autonomous cars on dedicated roads in Israel, as do Mobileye and Tel Aviv-based auto machine vision startup Nexar Ltd. “Perhaps the most interesting thing about AVs in Israel are the investments being made to create them,” said in the report Hillel Schuster, head of management consulting at KPMG Israel. “Most of Israel’s businesses are oriented towards creating solutions for international companies.” A more recent development in the Israeli automotive sector is the increasing interest of Chinese players, as part of growing Chinese interest in Israeli technologies. Mobileye is again spearheading the expansion with 15 partnerships with Chinese auto manufacturers, including Baoding, China-headquartered Great Wall Motors Company Ltd., state-owned Dongfeng Motor Corporation and Shanghai General Motors, Baidu, and the Beijing Public Transport Corporation. Other companies including LiDAR startup Innoviz Technologies Ltd. and radar for autonomous vehicles developer Arbe Robotics are also making inroads into China.

In addition to Israel’s low score on regulation and infrastructure, its limited geographical size, urban density, and crowded roads could make the adoption of autonomous vehicles even harder, the authors said. Adapting and revisiting regulations and establishing an AV-focused institution could help Israel advance in the readiness ranking, the report’s authors stated.