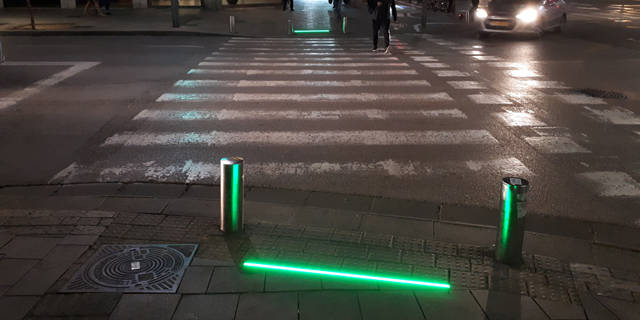 Can’t get your eyes off your smartphone? Tel Aviv has got you covered with traffic light strips embedded into sidewalks, so you will never have to look up again.

New pedestrian street lights have recently been installed on the pavements of a major intersection of Ibn Gabirol Street, one of the city’s busiest traffic routes. The move is part of a pilot program, which the city intends to expand to additional junctions in the future, according to a statement released by the city Wednesday.

The embedded LED strips light up in green and red in accordance with existing traffic lights to alert pedestrians caught up in their Candy Crush Saga game to when it is safe or unsafe to cross.

Similar pavement street lights have previously been installed in several cities worldwide including Sydney, Chengde, China, and the Dutch city of Bodegraven.

1.
Not a bad idea, but:
Cell phones and cars, bicycles, and pedestrians are a recipe for disaster. I think that issuing steep penalties for driving or walking while distracted is the answer. Put cameras on busy intersections and issue fines to all who violate Cell Phone Rules.