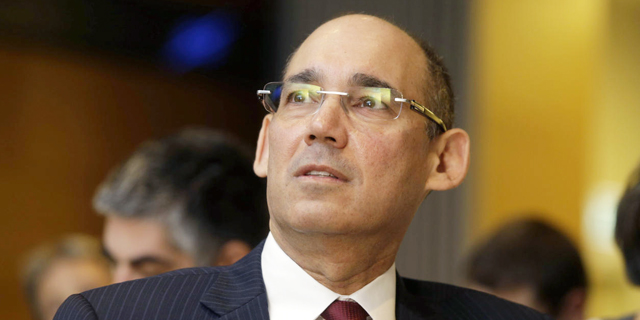 In 2017, Israel passed a law mandating a separation between the two largest banks in Israel and their credit card subsidiaries. The banks are now using mobile apps to get back into the Israeli payment processing game

After only a few months on the job, Bank of Israel Governor Amir Yaron is facing perhaps one of the toughest decisions he will have to make during his tenure: on the battleground of the Israeli payment processing market, will he side with the banks or with the newly formed independent credit card companies?

The banks, however, did not give up on the payment processing market and are now offering mobile payment apps, letting users instantly send money to their phone contacts. The apps all work under a similar model—the app charges a user’s credit card and transfers the funds directly to the receiver's bank account, requiring the sender to only fill out their phone number. For now, the apps—Leumi’s Pepper Pay, Poalim’s Bit, and Discount’s Paybox— are only available to private users. The new apps being offered by the banks carry many benefits. For one, they are suited for today’s users, accustomed to doing everything via their smartphones. They also decrease the use of cash, abiding by a government policy aimed at fighting unreported and untaxed transactions. But their potential reaches beyond private transactions and could also benefit the business sector. Retailers, for example, could use them to shorten lines, increase total transaction turnover, and help cut back on manpower. The crux of the matter is that in order to convince businesses to process their payments via the apps, banks must offer either more competitive commissions than those currently offered by credit card companies, or some other added benefit. If Yaron approves the banks’ entrance into the retail sphere, three new competitors will join the market, and private consumers could theoretically see that increased competitiveness in the form of discounts for users who will pay via app instead of via credit card, for example. As payment processing commissions are already relatively low in Israel, there is not much wiggle room for large retailers, and it is the smaller businesses with a more limited turnover that are expected to see the most benefits from increased competition. The main reason credit card companies keep offering payment processing services to retailers despite the low commission rates is that the relationship enables them to offer retailers additional services, such as loans. Furthermore, in the age of big data and artificial intelligence, access to retailers provides a powerful cache of information that can be used for identifying consumer trends, for example. It can also provide valuable information about customers that could potentially be interested in loans—the main income source of banks. If the banks manage to oust the credit card companies from the payment processing market, it will invalidate a large part of the reasoning behind the 2017 legislation. The law aimed to increase market competitiveness by setting up the credit card companies as independent rivals to the banks, particularly for businesses too small to leverage the banking system. According to the credit card companies, allowing banks to offer their payment apps to retailers will result, yet again, in a bank hegemony in the credit market. For that reason, when Yaron assumed his position, the Bank of Israel's banking supervision division promoted plans to restrict the use of payment apps by retailers for the first three years, a “newborn" protection for the fledgling credit card companies. But Yaron halted those plans, and must now decide whether such a restriction is in the best interest of consumers, for the long-term. The main concern voiced by the credit card companies is that together, with a net annual profit of NIS 4 billion ($1.1 billion) each, Poalim and Leumi are powerful enough to easily offer commissions at a loss for a few years, enough to kill the rival credit card companies, before bumping up prices again. As an initial phase, the banks’ payment apps are based on credit card infrastructure, which means that whenever a person transfers funds, the bank pays credit card companies a processing commission. In the private sector, the banks are currently bearing this cost without charging users, but partnering with retailers could mean a much larger scope of deals, or in other words, heavier commissions paid to their competitors. When partnering with a retailer, the banks will have to offer a more competitive commission than those offered by the credit card companies. If the Bank of Israel is interested in innovating the payments market while at the same time providing a safety net for the credit card companies, one way to do so could be forbidding the banks from making a loss on partnerships with retailers by undercutting their own commissions.

The bottom line: payment apps offered by the banks are a good thing. Israel, the so-called “startup nation,” is lagging behind the rest of the world when it comes to payment processing technologies, with a relatively high cash use compared to other developed nations. The banks, despite being traditional institutes, understand they need to get with the times and offer a product that can completely change the way consumers in Israel pay for services. But caution is still advised. The Israeli parliament has previously decided that the separation of bank and credit card company was needed to increase market competitiveness. Unchecked, the much more powerful and established banks could—slowly and cautiously, perhaps—retake the market and force out the newly created players. Steps must, therefore, be taken to enable the banks to gain a foothold in the new market, while at the same time making sure the credit card companies have a level playing field.