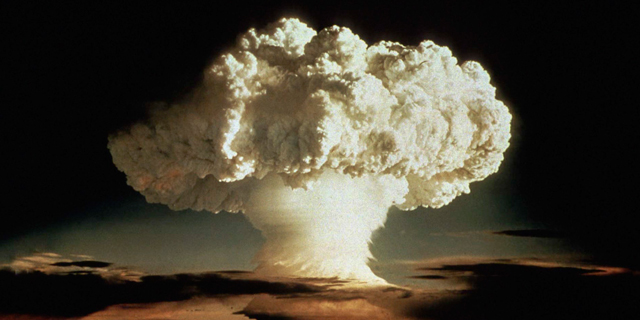 Israel will likely agree to ban nuclear testing within the next three years, Lassina Zerbo, head of the Comprehensive Nuclear-Test-Ban Treaty Organization (CTBTO) said in an interview with Calcalist Tuesday on the margins of the organization’s semi-annual Science and Technology conference in Vienna, Austria.

The organization’s goal is to promote the Comprehensive Nuclear-Test-Ban Treaty (CTBT), which aims to ban all nuclear weapons tests anywhere in the world. The treaty was adopted by the U.N. General Assembly in 1996 and signed by Israel that same year, but the country has yet to ratify it in parliament. The CTBTO also maintains an international monitoring system and verification regime to determine if and when nuclear tests have been conducted.

Since the first nuclear test in 1945, at least eight countries have detonated some 2,056 nuclear test explosions at dozens of test sites around the world. If the treaty enters into force, all nuclear weapons testing will become illegal under international law.

Born in Burkina Faso in western Africa, Zerbo, a geophysicist by profession, visited Israel in 2014 and met with the head of the Israel Atomic Energy Commission Shaul Chorev, as well as the country’s foreign minister at the time Avigdor Liberman and its intelligence minister Yuval Steinitz. Zerbo met with Israeli Prime Minister Benjamin Netanyahu in 2016, saying afterward that Israel’s ratification of the treaty was a matter of “when, rather than if.”

In 2011, the CTBTO conducted an experiment in Israel that blew up “more than 80 tonnes of explosives” in Israel’s Negev desert, with 20 countries participating, Zerbo said. The infrasound waves of the explosion were picked up “all the way to Mongolia” and reported back to the organization’s data center in Vienna, Zerbo added. The goal of the experiment was to show Israel the detection capabilities of the CTBTO’s international monitoring system and for the country to feel less politically isolated.

Zerbo said he had “spent over two years working personally with Israeli officials and more than ten years with experts at the Israel Atomic Energy Commission.” He asserts that Israel’s ratification is in the country’s best security interests, and is likely to occur in the near future, despite the outcome of Israel’s upcoming general election in September. Israel has neither denied nor confirmed its possession of nuclear weapons. The country reportedly conducted a nuclear weapons test in the South Atlantic in 1979. Israeli officials have every reason to want to know accurately and swiftly who in the region, or globally, may have conducted such tests, Zerbo said.

The Vienna-based organization maintains a global monitoring system for nuclear tests that is comprised of 321 stations and 16 laboratories throughout the world, that use seismic, hydroacoustic, infrasound, and radionuclide signals in order to distinguish natural explosions such as earthquakes, from man-made oexplosions, such as atomic bombs. The treaty has been caught in a plateau since 1996, since its own provision requires that 44 specific states, those that participated in the negotiation of the CTBT and that possessed nuclear power or research reactors at the time, to officially approve it in their respective parliaments. Some 184 nations have signed the treaty, of which 168 have ratified it. In addition to Israel, the U.S., China, Egypt, India, Iran, North Korea, and Pakistan have yet to ratify the treaty in order for it to enter into force. The author was hosted by the CTBTO at its semi-annual Science and Technology conference in Vienna last week.