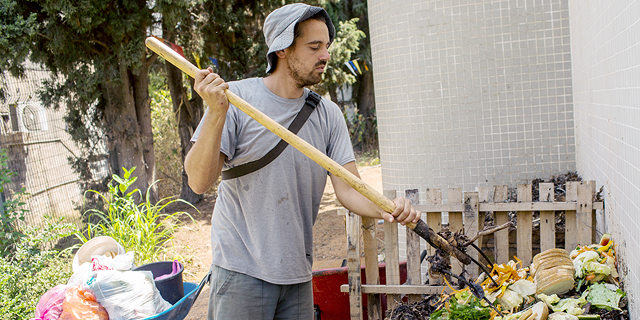 I have been separating my trash for years. I visit the local plastic bottle depository at least once a week, and the other colorful garbage cans that recently sprouted around Tel Aviv—blue for paper and orange for various packagings—also get some attention from me. My recycling zeal, however, tends to run out when it comes to wet waste. Being single and lacking impressive kitchen skills, my degradable food waste consists mostly of coffee grinds, eggshells, and the occasional lemon peel. Gradually accumulating in the bin under my kitchen sink, this waste normally ends up in my apartment building’s general garbage can once the stench becomes overwhelming. While there are rumors about special brown garbage cans dedicated to biodegradable waste, those have yet to materialize in Tel Aviv, where waste management services could be described as rudimentary. 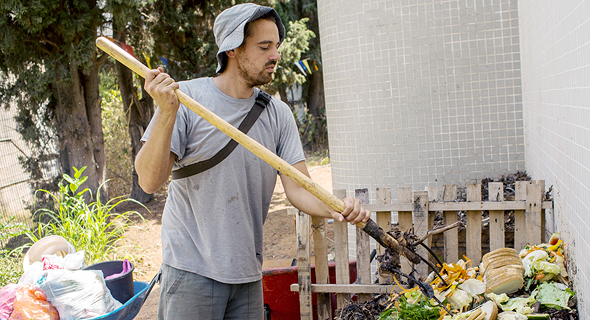 Imagine my excitement when I heard of a new local initiative launched this summer in my neighborhood, Shapira, by local residents in collaboration with the city of Tel Aviv. Called Shapira Lira, the initiative is trading in community currency in exchange for wet garbage. One kilogram of organic waste is worth one Shapira Lira, equal to NIS 1 (approximately $0.28). All you have to do is collect enough wet waste and bring it to one of three collection points where it is weighed and converted into tangible currency that can be used in local businesses.

The financial rationale is that treating and transporting 1 kg of wet waste costs the city around NIS 1, so it is worth spending the same amount on encouraging residents to separate trash while boosting local businesses.

Fearing I will not have enough trash by the end of the pilot program, I turned to a friend who is an amateur cook, who donated the waste from her pumpkin soup. Together with my own meager bachelor’s waste, I amassed enough for three shiny liras.

Located in southern Tel Aviv in an area populated mostly by auto repair shops and in the vicinity of the city’s notorious central bus station, Shapira is a strange bird in the Tel Aviv landscape. More than a vibrant neighborhood in a bustling metropolis, it resembles a small village. Its unique character and an accelerated process of gentrification has seen Shapira house a mixture of veteran residents, the country’s tech nouveau riches, and sandal-wearing hippies, such as Perry Samnon, the neighborhood’s sustainability coordinator.

I met Samnon as he greeted garbage-bearing old ladies who entered the plant nursery he founded at the neighborhood’s senior citizens’ center. The ladies hand him their garbage, and use the liras they receive to purchase plants on the spot.

Israel is not known for its effective waste management and the average Israeli produces about 610 kg of trash a year compared to about 500 kg on average in other OECD countries, according to data from Israeli advocacy group the Israel Union for Environmental Defense (also known as Adam Teva V’Din). Awareness of sustainability only began to develop in the country in the past two decades. There is still a long way to go, but Shapira is showing some signs of optimism. The neighborhood now has nine public composters, two community vegetable gardens providing fresh produce to residents, and one food forest, among the founders of which is Samnon.

Samnon said he does not want to see trucks coming into the neighborhood. “Sustainability is all about relying on local produce as much as you can, growing your food locally in your own neighborhood, or at least buying it there,” he said. This means less dependence on motorized transportation and greater confidence in the source and quality of the food consumed, he explained.

However, vision aside, it seems the locals have yet to adopt the necessary habits to make Shapira Lira a success. I spent two hours with Samnon at Cafe Shapira, one of the locations taking part in the project, which uses the collected compost for its vegetable garden. During that time, just four people arrived bearing trash. My attempt to cash in on my liras might provide a partial explanation for the lukewarm adoption of the project. As of now, just four businesses in the neighborhood accept Shapira Liras. Aside from Samnon’s nursery, they all limit the amount of cashable liras to just 10% of the deal. This means that for a beer that costs NIS 22 (approximately $6.2), for example, you could get a discount of up to NIS 2 (approximately $0.56) and all you have to do for it is carry your smelly garbage around town.