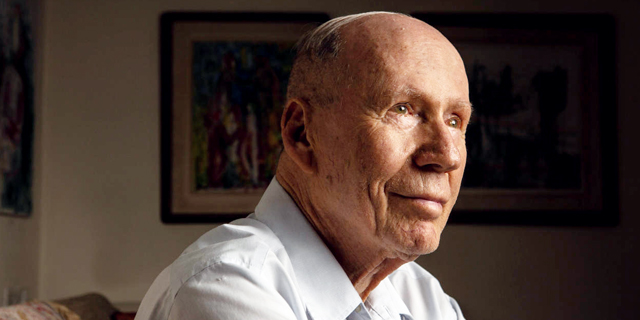 Israel should reevaluate its economic policy, according to former Bank of Israel governor David Klein. In a recent interview with Calcalist, Klein was measured in his speech, but his experience and past positions mean his words are a resounding slap to the face. Klein headed Israel’s central bank in 2000-2005, a tomoulous time that started with the Al-Aqsa Intifada, continued with then-finance minister Benjamin Netanyahu’s severe cuts to Israel’s welfare system, and ended with the Israeli disengagement from Gaza. Unlike the superstar governors that preceded and succeeded him—Jacob Frenkel and Stanley Fischer—Klein was considered conservative and dull, not one to put a spoke in the wheel. Today, at the age of 84, Klein still considers his words carefully but his message is sharp, even combative: the government deficit is too high, Israel’s foreign exchange reserve policy is out of control, the way numbers are rearranged to balance the budget is dangerous, and the premises according to which policy makers come to decisions are no longer relevant. For some reason, the changes that happened in recent years are not being taken into account when setting policies, Klein said.

Klein is of the opinion that Israel’s fiscal policy should be the exact opposite of what it is today—that is, that Israel should sell its foreign currency reserves instead of increasing them. “It may be revolutionary, but we do not need to do it fast. We need to say that, regardless of the exchange rate, we are selling $25 million a day, gradually. It does not need to have much of an impact but it will accumulate. The policy needs to be target-oriented and the target is to diminish the foreign currency reserves and thus diminish the Bank of Israel’s deficit. Israel’s foreign currency reserves should not exceed $40 billion.” The Fischer-esque policy that has dominated the Bank of Israel since his tenure should be corrected because it is not natural, Klein said. “There was a discussion in the literature about how one refers to a bank with negative equity, something that in a commercial company would be considered insolvency. Such a correction will decrease the bank’s negative equity, and maybe create some surplus for the bank to cover the government deficit, as the law dictates.”