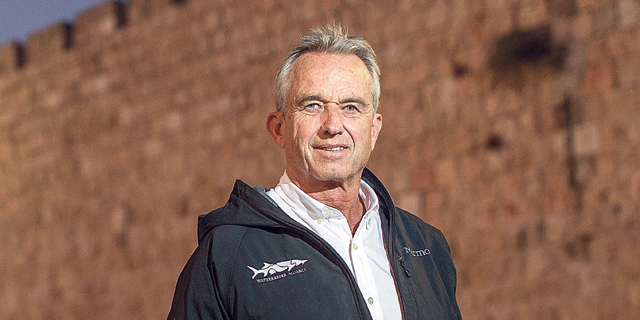 Kennedy, a lawyer and environmental activist whose controversial views on vaccines and his own father’s assassination often raise eyebrows, spoke to Calcalist during a recent visit to Israel

According to Robert F. Kennedy Jr., pollution is just a way to violate people’s rights and invade public property. Kennedy, a lawyer and environmental activist whose controversial views on vaccinations and his own father’s assassination often raise eyebrows, spoke to Calcalist during a recent visit to Israel. As part of his environmental activity, Kennedy previously took on giants like Exxon Mobil Corp. and General Electric for their part in polluting New York’s Hudson River. When these companies contaminated the Hudson, they violated the New York State Constitution that determines the fish in the river belong to the public, he said. The public lost its property because of the chemicals these companies dumped into the water, he added. “Three of my kids have asthma, and when coal power plants pollute the air, they are practically stealing the air my children own, to benefit their shareholders,” he said.

Kennedy said he is fine with the criticism because he is confident he is right, and having a large family, he faces both support and resistance from its members. “I think most people don’t like me,” he said, explaining that the Kennedys have had strong ties with medical institutions for generations and they appear to be disappointed in him. His sentiments on vaccines nearly led him to collaborate with Trump, who he vocally opposes on every other stance. Kennedy says that when Trump first came to office he was asked to head a committee that would examine the testing processes of vaccines. Kennedy took the job but Trump backed down, he said, blaming the shift on people from the pharma and health industries, which Trump let into his administration.