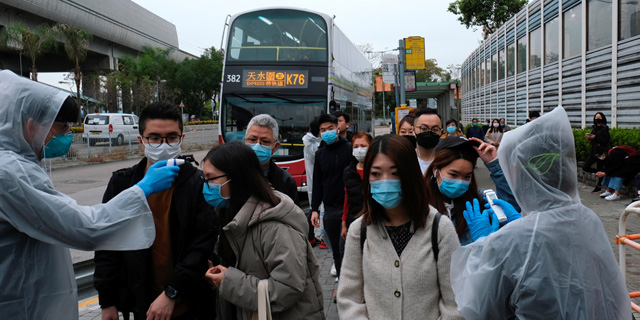 Could–and Should–Rapid DNA Testing Be Used to Curb the Spread of Coronavirus?

Genetic testing of travelers to detect coronavirus RNA could prove more efficient than quarantine, but it raises concerns about privacy

The emerging coronavirus pandemic has one small but significant silver lining. Advancements in genomic sequencing technology have enabled experts to rapidly isolate and genetically sequence 53 versions of the novel virus, 2019-nCoV.

U.S. lawmakers acknowledged recent triumphs in genetic technology that made that possible with the 2017 passing of the Rapid DNA Act. The act promotes the usage of fast sequencing technology among U.S. police forces, by instructing the FBI to create standards for the technology. While new DNA sequencing machines can now produce DNA fingerprints in hours instead of weeks, they only sequence a minutia of the human genome. However, similar technologies are already being employed in clinical and research labs to sequence entire human genomes. Two decades ago, it would have taken billions of dollars and 13 years to sequence the genome of a single human. Ten years ago, that same process was cut down to a handful of days and a couple thousand dollars. Now, it costs less than $600 and takes less than 24 hours. What other consumer service category can boast such a rapid and steep reduction in cost and processing time.

Knowing a virus’ genomic sequence is integral to developing antivirals, vaccines, and for accurately identifying the virus and its carriers. Since the coronavirus is contagious even before the appearance of symptoms, efforts to find carriers based on indicators like fever alone–a method which is currently in use in many airports and borders around the world–are likely ineffective in limiting the spread of the virus. Given our current inability to accurately identify carriers, countries repatriating their citizenry from Wuhan, China have made efforts to effectively quarantine all returning citizens for the duration of the coronavirus incubation period, around two weeks, a blunt and potentially ineffective dragnet.

It may also strike us as a clear violation of fundamental human rights, to be forced into quarantine. In the U.S., however, it is entirely legal. While the legislative powers of the U.S. Congress are limited to what is enumerated in the constitution, the longstanding ability to isolate and quarantine returning Wuhan visitors stems from the broadly applied commerce clause in the U.S. constitution. Under the commerce clause, the government is empowered to regulate interstate commerce, including the passing of communicable disease over state lines under the Public Health Service Act. The states themselves have the power to enforce isolation and quarantines under their respective police powers.

But, with the coronavirus sequence of 29891 nucleotides now known, we could limit the extent of these quarantines that ensnare many healthy individuals in their seeming overuse, especially if the pandemic continues, by simply running what is known as a Reverse Transcriptase Polymerase Chain Reaction test (RT-PCR). Succinctly, the viral genome is comprised of RNA, a close analog to our DNA genome. The RNA, if the host is infected with the virus, can be collected and converted into DNA by way of an enzyme, reverse transcriptase. The DNA molecule can then be copied via Polymerase Chain Reaction using the knowledge we have gleaned from the viral genome. The incorporation, or lack thereof, of fluorescing markers into those copies will indicate the presence or absence of the virus.

In fact, the U.S. Food and Drug Administration (FDA) has fast-tracked the clearance of an RT-PCR test. The instructions on how to use the test are already available online at the Center For Disease Control (CDC) website. Other companies are working on even simpler types of tests.

However, the collection of biomaterials containing DNA and viral RNA from the host as an alternative to quarantining could raise its own host of issues, especially the invasion of privacy, and potentially illegal searches and seizures under the Fourth Amendment of the U.S. Constitution. Notably, the courts only just ruled that the heretofore expansive powers of the authorities to search incoming visitors at border crossings is much narrower than previously thought.

And, worldwide, multiple attempts at wide-scale biometric data collection have been quashed. Kenya’s biometric law, which sought to collect facial and other biometric data from its 50 million-plus inhabitants, was forced to stop as courts raised concerns over privacy violations. Such concerns have already played out to some degree in India due to security issues with their 1.1 billion-strong biometric database.

Once the system is set up to do rapid DNA based screening at the border, the U.S. could begin excluding visitors based on other genetic testings as well, using the virus testing infrastructure stationed at various airports and border crossings. But unlike the fingerprinting that is done routinely at many terminals and border crossings, genomic testing could lead to eugenics-inspired abuses, by blocking visitors deemed genetically undesirable. Rampant DNA screenings could also force visitors to confront their genetic destinies–the discovery of impending genetic diseases, for example–for merely wanting to come into the U.S.

The U.S. may already be sequencing the DNA of some entrants at the border. In October 2019, the New York Times reported on a government plan to collect DNA from migrants detained at the U.S. southern border. Ostensibly, this DNA collection–which has recently raised the ire of a number House Democrats–is designed to match children to their parents when they cross the border, and to limit the number of adults claiming to be parents of unrelated children. But, once collected, the DNA would likely end up in the FBI’s CODIS database of DNA extracted from arrestees and criminals. Like other methods of identification, the U.S. Supreme Court allowed the collection and use of arrestee DNA in their landmark ruling, Maryland v. King. Arrestee DNA data is still a hot button issue in Europe, however. Notably, the U.K. has caused frustration for not sharing their arrestee DNA data with its now-former European Union peer nations. Until now, the U.K. had been sharing just the DNA of convicted criminals, but not that of suspects, unlike the rest of the EU nations. As a result of Brexit, there have been threats that the U.K. could now lose access to all of EU DNA data from their criminal databases if they continue to hold back arrestee genetic fingerprints.

This is not the only recent brouhaha with the U.K. and DNA. There are several companies operating in the U.K. that test clothing for evidence of infidelity between partners, a potentially illegal activity, punishable by up to three years in prison if the suspect does not consent to the test. Because of this limitation, a number of foreign operators have long refused to work with U.K. based clients in that area.