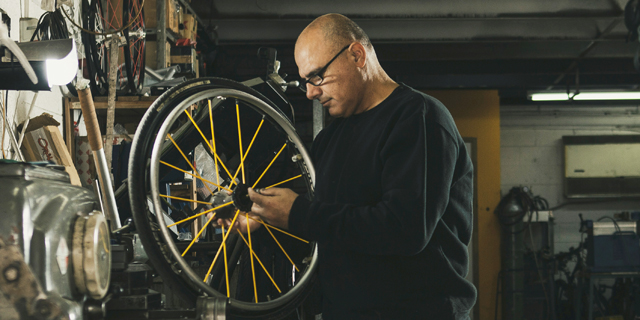 The Paralympic Medalist That Builds Wheelchairs for Athletes

Losing his leg in a military operation at the age of 20 led Doron Shaziri to his two great passions: competitive shooting and customizing sports wheelchairs

Doron Shaziri was 20 years old when he lost his left leg to a landmine during a military operation in Lebanon. The injury, he told Calcalist in a recent interview, could be viewed as a blessing in disguise. It so happens that it led him to his two great passions: competitive shooting and building customized wheelchairs for athletes.

While in rehab, Shaziri got into wheelchair basketball and started playing professionally. “It was like bumper cars, it was tremendous fun,” Shaziri said in a recent interview. At the same time, he continued to shoot competitively, a sport he picked up as a teenager.

Two years after his injury, Shaziri competed in his first international contest and in 1992 he shot at the Barcelona Paralympics. He won his first two Paralympic medals in Atlanta in 1996 and has participated in five Paralympics since, winning several bronze and silver medals. After 10 years of attempting to combine the two, Shaziri decided to quit basketball and focus on shooting. Now 53 years old, a widower and father of two, Shaziri is training hard for the 2020 event to take place in Tokyo this summer. Shaziri’s other passion is fitting athletes with customized wheelchairs compatible with their chosen sports. One of Shaziri’s customized chairs could set you back between NIS 18,000 and NIS 21,000 (approximately $5,245-$6,120). “A regular chair mostly needs stability to be able to go over challenging terrains like grass,” Shaziri said. However, in basketball, for example, the terrain is a smooth parquet floor and so speed is what matters most, he explained. That is why wheelchairs built for basketball have angled back wheels offering better maneuvering capabilities, he added. Basketball wheelchairs, which account for most of Shaziri’s business, also have an arch in the front that functions as a type of bumper to prevent injury from a collision, he said. In fields like tennis, where there is no physical contact between players, you do not need the arch, he added. Another popular wheelchair sport is badminton, which requires relatively simple chairs, as most movement is leaning back and forth, Shaziri said. So, with a badminton wheelchair, the seat is very low, the back-rest is flexible, and there are two additional small wheels at the back of the chair to make sure it doesn’t turn over, he explained. "We also make wheelchairs for rugby, which is played indoors on parquet like basketball,” Shaziri said. However, unlike basketball, where you have rules against touching, in rugby the whole goal is to physically tackle your opponent, he added. That is why a rugby chair is built like an armored car, he said. Shaziri also builds wheelchairs for dancers with more moderate wheel angles, so that a partner could come close while preserving the dancers’ ability to maneuver quickly and accurately, he said.

Shaziri says modifying wheelchairs came naturally to him as he was always good with his hands and enjoyed fixing bicycles when he was a kid. “I have a very intuitive approach to engineering and what engineers learn to calculate I can just see in my mind’s eye,” he said. “I was also lucky enough to have friends to help me get over technical difficulties. Welding, for example, I learned from a friend’s friend,” he added. In his day-to-day life, Shaziri said he does not feel like he has a disability. “I walk, I drive a stick, and even ride a bike,” he said. “I am privileged, I do not have phantom pains and the injury even did me good: a few weeks prior, I sprained my ankle, so the amputation ended the pain.”