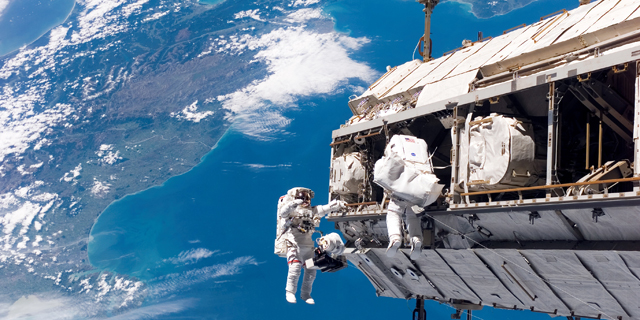 To Seek Out New Life and New Deadly Viruses

The modern interconnected world allows incredibly quick and uninhibited travel across the planet, as exemplified by this week’s fastest-ever subsonic flight between New York and London. This ease and freedom of movement, while greatly facilitating commerce and tourism, also enables the quick and broad spread of viruses, such as the novel coronavirus, which, while in the past would have been relatively isolated within China, is quickly becoming a global pandemic. And, like the coronavirus that became more deadly to humans as it grew at the wet market in Wuhan where living and dead wildlife is sold, research conducted in the past few decades showed that some bacteria become more deadly and resilient when grown in space. But this notion is not new, as deadly space contagions are a long-standing science fiction trope. In the late 1960s, Michael Crichton published the New York Times best-seller, The Andromeda Strain. In the book, and later the film by four-time Academy Award winner Robert Wise, a highly virulent extraterrestrial contagion infects and kills out an entire town.

This past week, perhaps in spite of the foreshadowing of science fiction, NASA sent samples of genetically engineered bacteria to the International Space Station (ISS). While the novel and dangerous Wuhan coronavirus, now officially renamed COVID-19, seems probable to our society, the spread of an out-worldly virus is deemed particularly unlikely in real-life. But it might not be. In a paper published just last year, astrobiologists suggested that viruses could spread around the galaxy even on seemingly dead space rocks, providing evidence of life, or some variation thereof, in space.  Just last week it was announced that scientists have discovered a consistent repetitive pattern of radio signals emanating from a galaxy 500 million light-years away. The signal seems to repeat itself every 16 days, which, among other possibilities, may suggest an intelligent source.

In fact, much of space research efforts are based on the assumption of the existence of extraterrestrial life. And, if life does exist beyond Earth then there is a possibility that, as was the case of the fictional Andromeda strain, seeking it could introduce novel contagions, far worse than coronavirus.

Our appreciation of the extent of life and its ability to survive in hostile environments, like space, is evolving. Only a couple of years after the film The Andromeda Strain was released, scientists discovered vibrant deep-sea life where we previously thought life was nearly impossible.

And while we do not as of yet have the tools to look for space viruses as our robots explore outer space, we do have the necessary equipment to examine space rocks returned to Earth for signatures of viral existence. Which may be found sooner than you think. Earlier this week NASA also formerly announced its plans to bring back rock samples from Mars.

Meanwhile, the Japanese Hayabusa2 mission collected rock and soil samples from the asteroid Ryugu and should return to Earth with these samples later this year. While we hope that neither of these missions will bring back some sort of contagion along with their samples, it is likely that at some point future sampling missions will. Legally, nations ought not bring back dangerous samples, as per Article 9 of the foundational Outer Space Treaty. The same article of the treaty that requires space agencies to endeavor to not bring back anything that could harm life on Earth, also requires us to not sully the space environment outside of Earth. Arguably, Elon Musk’s multi-billion dollar Starlink satellite constellation, which currently numbers nearly 250 items and aims to grow to thousands—12,000 such satellites have already been approved by the relevant U.S. regulators—does both. StarLink, which is supposed to provide world-wide affordable internet access through satellite connection, could potentially introduce massive amounts of junk into Earth’s orbit, as the mass-produced satellites will likely fail at a higher rate than standard satellites, leaving their useless carcasses speeding around Earth until they eventually fall into the atmosphere and burn up upon reentry. Also, with so many satellites circling the Earth, it is inevitable that many will end up over the South Atlantic Anomaly, a sort of Bermuda Triangle for low Earth orbit satellites caused by the unique positioning of the Van Allen radiation belt. While satellites do regularly cross through this area, the smaller and cheaper StarLink satellites might not have the necessary shielding or computer redundancies to protect them from the higher levels of charged particles that can cause what are known as single-event upsets that can alter a satellite’s computer’s memory and even cause catastrophic failure.

But, until such time as the satellites start to fail, they are currently becoming an increasing nuisance to Earth-bound space explorers, even before they are fully operational. SpaceX’s StarLink satellites have turned out to be much more reflective than expected, and are now brighter than the vast majority of other objects in the night sky, creating substantial light pollution that is particularly aggravating for astronomers who are being photobombed by Musk’s devices as they seek an uninhibited and unimpeded view of the sky.

To its credit, SpaceX is working with astronomers to reduce these problems, but it is just one of many similar companies vying to launch thousands of small satellites into Earth’s orbit. Not all companies will be as accommodating, and while Musk will likely never sell SpaceX, a recent report has indicated that he intends to spinoff the potentially $22 billion a year StarLink business and turn it into a public company. It is unclear if the newly public company will be as cooperative.

StarLink’s recent January batch of satellites was also the first one under the new U.S. Space Force. The 45th Space Wing, assigned to Florida and responsible for all launches on the eastern coast of the U.S., oversaw the launch. Iran’s space ambitions, which supposedly are ineradicably tied to its missile ambitions, did not go as well, this week.

The newly created Space Force, which among other things is entrusted with protecting against a possible Iranian threat in space, should it ever emerge, is the sixth branch of the U.S. military. Given its overt military role, the Space Force may, arguably, also run afoul of the aforementioned Outer Space Treaty, which ironically calls, no less than 14 times, for the use of outer space for peaceful purposes.

Earlier this week, the Space force asked for a relatively modest $15 billion budget to fund its efforts in the coming fiscal year. As a new branch of the military, we can expect that some of the billions of dollars it receives will be going towards famously expensive military grade toilets. In fact, the International Space Station also has special toilet seats that are covered in an antimicrobial coating called AGXX, designed specifically to counteract those deadly space super-microbes, but, alas, is still powerless against coronavirus.