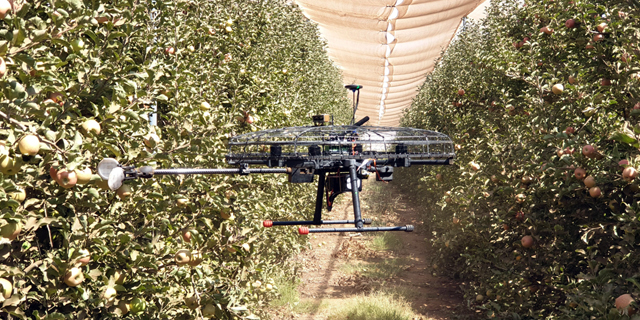 Precision Agriculture Is the Agtech Word of the Day

There are some 1,600 global agtech startups, all are focused on one goal—maximizing profit for the farmers by improving efficiency, boosting yield, and cutting costs

If farmers today mention clouds, odds are they are talking about technology, not the chance for rain. Amazon already has an agtech-dedicated cloud service, Agritech. Microsoft hopped on the bandwagon two months ago when it announced that it turned its FarmBeat research project commercial, offering farmers an AI platform that can gather data from sensors, satellites, drones, meteorological stations, and other tools and analyze them to produce insights and recommendations.

But it is not just the giant tech companies that go to the farmer in search of additional revenue sources. There are no less than 1,600 global startups in the domain (not including adjacent domain foodtech). All are focused on one goal—maximizing profit for the farmers by improving efficiency, boosting yield, and cutting costs. While other professions fear the day robots replace human employees, farmers, always in need of more manpower, dream of it.

According to Michal Levy, senior deputy director-general of agricultural innovation at the Israeli Ministry of Agriculture, agritech today emphasizes precision agriculture—for example, the use of sensors and digital systems for monitoring crops, in order to understand individual needs and help cut water and pesticide use. Another avenue is genome editing, to develop new, improved strains. “These sectors raised billions of dollars in recent years, and in fact, there are too many companies nowadays, so we are seeing mergers and acquisitions,” Levy said.

The domain, however, is not rife with unicorns, because it can take years to test a product and prove its usefulness to farmers. The most prominent unicorn is Boston-headquartered Indigo Agriculture Inc., which raised $250 million in September 2018 according to a company valuation of $3.5 billion. Founded in 2014, the company develops microorganisms that make plants more resistant to drought and severe climate conditions, and according to statements, enables farmers to increase yield by 10%-15% using the same amount of water, fertilizers, and pesticides.

Another unique characteristic of the agtech industry is geographical dispersion. Unlike fintech or cyber companies, which tend to congregate in specific areas—near competitors or revenue sources—agtech companies tend to settle near fields, orchards, and farmers. Minnesota, for example, is a veritable hub of agtech startups. Conservis Corp. was born there, after local farms struggled to manage the entire production chain, from stock monitoring to profitability testing. They approached some programmers, and the result was a farming management tool. Today, Conservis is one of the most promising companies in the sector, with $45 million in funding raised and around $8 billion-worth of farming operations being managed using its technology.

The number of agtech subsectors is almost infinite, and Israeli companies exist along most of the spectrum. One of the most Israeli-heavy subsectors is drones—currently utilized as sentinels, but with the potential for much more. Fruit picking, for example. Simultaneously, crop-picking robots are developed for products much closer to the ground. Israel-based MetoMotion Ltd., for example, developed a robot that can identify and pick only ripe tomatoes. The company raised just $4 million to date but continues to develop the robot to cut down on the need for human employees. By now, for instance, the robot has learned how to remove the leaves from the stems.

Israel’s drone dominance is the result of them being an offshoot of the security industry, with military knowledge often being reincarnated into very surprising applications. A group of entrepreneurs who developed technology for the identification of underground tunnels and movement during their army service went on to establish Agrint Sensing Solutions. The company utilizes a similar technology for early detection of tree infestations, a problem that is often not detected until the three is on the brink of death. Agrint’s sensors are installed on the trees and detect the activity of red palm weevil larvae, which borrows inside the trunk. With 4 billion palm trees worldwide, the company has impressive market potential.