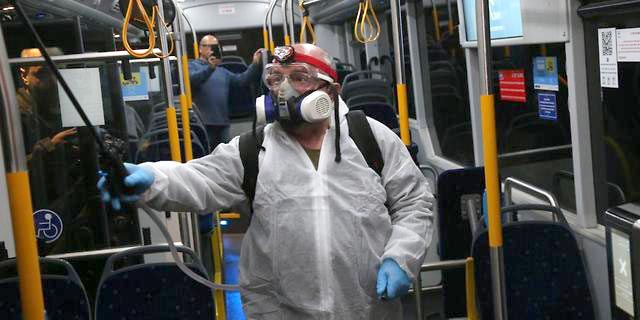 Covid-19 has already spread to 115 countries and territories around the world, but not everything is bleak. Compared to the 2008 crisis, the financial system is more stable; compared to SARS, medical technology is more advanced

The number of countries and territories where coronavirus (Covid-19) infections have been reported has reached 115, with Panama and Mongolia reporting their first cases Tuesday. The number of overall corona cases globally has passed 116,000, and the number of global deaths has passed 4,000. However, not everything is bleak: for the first time since the outbreak started, the number of new daily cases in China fell below 50.

"Corona Is Slowing Down, Humanity Will Survive" >>

Covid-19 Will Not End the World, so it Should Not End Business >> Don’t Panic, the Sky Won’t Fall, Says Mellanox CEO >> As the outbreak is finally showing signs of abating at ground zero, here are five additional reasons for optimism.

A bus in Israel getting disinfected. Photo: Motti Kimchi

We are not in 2008: the banks are less leveraged Though the recent market crashes bring to mind the 2008 financial crisis, investors should not be disheartened. The leading global banks are much more robust today and their leverage ratio has narrowed by 50%. Following the 2008 crisis, regulators around the world pressured banks to build up their stability and increase their capital requirements as a way to safeguard against shocks. Lessons learned led banks to make safer investments in less complex assets. After Black Monday—the name commonly given to October 19, 1987, when the Dow Jones Industrial Average (DJIA) crashed by 508 points, or 22.6%—the DJIA needed 18 months to recover. Following the 2008 crisis, in comparison, the DJIA returned to the record highs of 2007 only in 2013: the crisis was characterized by complete paralysis of the banking system. Today, even though the world is still in the midst of the crisis, the relative robustness of the leading global banks could ensure that the stock market crash will be more like in 1987 and less like in 2008. Scientists are hard at work: Taiwan has already isolated relevant antibodies Taiwanese research institute Academic Sinica, which employs over 1,000 scientists and has been ranked 22nd on Reuters’ World's Most Innovative Research Institutions list, announced on Sunday it has isolated antibodies related to the virus. The new discovery, the institute said, will enable rapid nucleic testing that could shorten the current testing time for coronavirus—which stands at four hours—to as little as 15 minutes. According to An-Suei Yang, a professor at Academic Sinica’s genomics research center, he and his team have managed to manufacture 46 antibodies in 19 days, with one of them binding to a specific coat protein that can be found only in Covid-19, and not in any other coronavirus type, such as SARS or MERS. Current tests rely on the identification of virus genomes, which is why they take longer. Academic Sinica has established a Covid-19 platform to encourage information sharing with other research institutes and facilitate the development of better testing kits, relevant drugs, and a vaccine. Shops carry a steady supply of alcohol—and no, not the drinking kind Suspected coronavirus germs on surfaces and furniture can be treated with ethanol, hydrogen peroxide, or sodium hypochlorite. With proper disinfection measures, even the risks attached to crowded enclosed spaces such as planes, trains, and busses can be reduced. According to the U.S. Centers for Disease Control and Prevention (CDC), frequent handwashing with soap and water is the best way to avoid infection. If soap is not available, disinfection with hand sanitizers containing at least 60% alcohol will do. Also, avoiding touching your face with your bare hands will limit the odds the virus will find its way to your respiratory system. But this is easier said than done. Sara Cody, the Santa Clara county's public health director, was caught in the act just several days ago—a viral clip showed her licking her finger to turn a page just moments after she called on the public to avoid touching their faces. People need to be aware of the habit, Dawn Mueni Becker, an infectious disease specialist in Gainesville, Florida, told CNN. Becker advised people to use tissues instead of their hands in case of sneezing or a need to touch their faces.

We are all smarter and action is taken more quickly than ever The first cases of what later became known as HIV were described in June 1981 in a CDC weekly. It took, however, over two additional years to identify the virus. The first cases of Covid-19, described as severe pneumonia, were reported in China on December 31: by January 7, the virus had already been identified and a test capable of confirming infection was created by January 13. The genome of the virus was made available on the tenth day of the outbreak and scientists now know it is a novel coronavirus that belongs to the betacoronavirus 2B lineage, same as SARS. Unlike the era when HIV first emerged, extensive global scientific cooperation exists today. A month after the outbreak started, 164 scientific papers were already available on PubMed, and many more papers that have yet to undergo peer review were available on other databases. Initial works concerning possible vaccines, treatments, epidemiology, genetics, diagnostics, and other topics related to battling the virus can also be found. In 2003, when SARS broke out, it took over a year to achieve half this amount of information. Honey, the kids are alright The virus has led to some deaths, but the overall numbers are relatively low. Out of around 116,000 global cases (based on the most updated information), around 64,630 have recovered and around 4,090 had died. The rest are currently undergoing treatment. While the elderly or immunocompromised and those with chronic conditions are at higher risk, those under 20 seem robust: currently, only 3% of all cases were discovered in this age group, and the mortality rate for people under 40 stands at 0.2%. Women also have cause for optimism. They are not only likely to live longer regardless, but are also less likely to die of corona. Women and men have intrinsically different immune responses, Paul Hunter, professor of medicine at the University of East Anglia, told the BBC recently. While women are more likely to experience autoimmune conditions, there is good evidence they produce better antibodies to flu vaccines, he said.