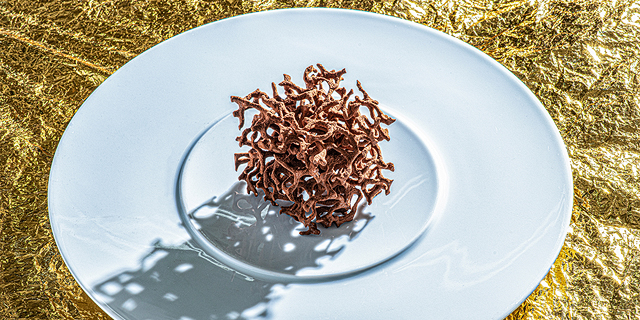 From space fermented miso to molecular caviar, scientists are hard at work to create interesting meals for humans outside of earth as the feasibility of private space travel increases

On March 9, Jessica Meir, a NASA astronaut, marine biologist, and physiologist, helped navigate SpaceX’s Dragon cargo capsule into the International Space Station (ISS), where she was stationed at the time. Meir, who had since returned to earth, then unloaded, along with her team, some two tonnes of supplies including a little bag sent from MIT containing a yellowish miso paste. For those unfamiliar with the Japanese flavor bomb, miso is a paste composed of cooked soybeans fermented for months with salt and kōji, Japan’s favorite edible mold fungi (Aspergillus oryzae). The result is a wide array of pure and surprisingly pleasant sweet-salty-umami flavors. A spoonful of miso can turn a cup of stock into the rich and delicate soup that accompanies almost every meal in Japan.

Meir, the daughter of an Israeli who immigrated to the U.S., and her two teammates tasted the miso periodically over the course of a month and filled out a sensation report. An earth-bound panel did the same with samples left on the surface. The goal of the experiment was to help map the emergence of a new space terroir and track how the paste’s microbiome and flavor chemistry changes in space, compared to the earthbound control samples. When Meir returned to earth last month, she took samples with her for further biochemical analysis. The Space Miso experiment is part of a wider project, initiated three years ago, to create, from scratch, the outer space cuisine—the local kitchen of future space travelers. Creating culinary principals out of thin air is nothing new. French cuisine, for example, was concocted at some point by specific individuals who took the time to dictate what constitutes as French cooking and what does not and their rulings are upheld to this day. Israeli cuisine is no less of an invention and, in fact, it is continuously inventing itself as we speak. As such, it appears the time has come to carefully construct the culinary arts of infinity and beyond. Outer space is becoming closer than ever and private space flights may soon not be considered science fiction. Two years ago, British billionaire Richard Branson, managed to send his VSS Unity vessel to 82.7 kilometers above earth’s surface, where it reached outer space, according to the U.S. definition of earth's borders. In 2024, Elon Musk’s SpaceX intends to launch its first manned mission to Mars and just two weeks ago it launched a first manned mission to the ISS, in collaboration with NASA. Jeff Bezos’ Blue Origin LLC also intends to land a crewed vessel on the moon by 2024. These past and future developments have made addressing space cuisine a priority. To this day, NASA’s kitchens provide astronauts with industrial food, a hybrid between a field ration and cup noodles. These edibles have an infinite shelf life, weigh practically nothing, and produce no droplets or crumbs that might find their way into somebody’s eye in a zero-gravity environment. Imagine a crumbling freeze-dried goulash brought back to life with water injected into its nylon packaging. It is then eaten through a narrow crack in the nylon. Currently, the most popular foods in space are dried fruits and U.S. military field rations, despite their flareless nature. This could be explained by the fact that in zero-gravity environments, humans lose their sense of taste, as liquid is accumulated in the head, creating the constant sensation of having a cold. NASA is already addressing this issue, especially since psychologists sent on its behalf to isolated research facilities in Antarctica and nuclear submarines, have noted that shared pleasant meals are key to survival for people on long missions at remote and isolated locations. In other words, NASA’s psychologists concluded that good food is a basic human need and that more good meals mean less life-threatening accidents. NASA then approached outside experts and they said the real question was how to create an authentic space terroir and cuisine. The researchers are taking in two distinctly different routes. On the one hand, they are practicing culinary sciences in zero-gravity conditions. Much like food manufacturers and chefs are experimenting and examining various phenomena and their applicability to preparing food on earth, scientists are looking into these phenomena in out-of-this-world settings. On the other hand, they are examining new flavors and techniques that do not mimic terrestrial cooking, to create a cuisine that is appreciated in its own right. To this end, MIT’s team has turned to the trendy discipline of molecular gastronomy, which entails using technology and food-derived chemicals to create gourmet dishes. Among their concoctions are zero-gravity compatible molecular caviar. It is created by trickling several drops of beetroot juice into a bowl of calcium compound. The unique conditions in space create a thin calcium cover on each drop making it a “juice pearl.” Each pearl is then injected with a drop of orange juice. At zero-gravity, the two juices would not mix, instead creating a visually compelling drop within a drop effect. Another notion entails “meat” eaten off an artificial silicone bone that can be stuffed with various fillings, miso, for example, to be sucked out like bone marrow. A perfect combination of predatory instincts, creative use of technology, and sustainable foods.

Another aspect of space cuisine examines how plants grown in space vary in appearance and other qualities from their earth counterparts or how the shape of salt grains varies. At the end of the day, this could all turn out to be a fruitless adventure, but it appears that sometime in the next 30 years, the first local space cuisine meal will be served. This will, of course, occur thanks not only to the researchers who dared to dream down here, but also to the pioneers up in space, who first tasted their miso.