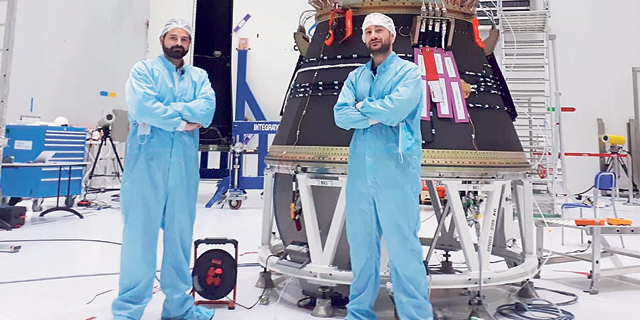 After a year’s delay, Israeli space experimentation startup SpacePharma’s DIDO-III nanosatellite finally launched Wednesday night. The tiny spacecraft weighs less than 50 kilograms (110 pounds) and is the first of its kind to enable space experiments in zero gravity conditions that are fully controlled from Earth. This is the second nanosatellite launched by the company. The DIDI-II was launched in 2017 and is still orbiting in space, though it is no longer operational and contact with it has been severed.

The launch got underway at 04:51 Israel Standard Time at the European Space Agency’s launch site in French Guiana, in South America. It was carried into space by Arianespace’s Vega commercial launcher along with 52 other micro-satellites.

Forty minutes after launch, the satellite entered its orbit and at 11:00 a.m. was scheduled to first hover over the company’s communications center in Switzerland. Four experiments are being conducted using the miniature lab that’s roughly the size of a shoebox, and starting in three weeks they will be carried out by remote control by the research teams on terra firma. Among the experiments taking place in the current mission is one that tests the impact of zero-gravity on the human aging process as part of preparations for the age of space tourism and manned long-distance spaceflights, to the moon and mars, that are planned to take place in the upcoming decades. All four of the experiments are the results of collaborations between Israeli and Italian research institutes as part of a cooperation agreement between the two countries’ Science Ministries. DIDO-III was initially scheduled to launch in September 2019 but was repeatedly pushed back due to technical issues, unfriendly weather conditions, and most recently the Covid-19 outbreak.

The chemical and biological materials used in the experiments were inserted to the satellite back in June and the launch delay meant they were kept in cool, but unmonitored conditions for the last few months. “Most of the materials we selected are stable ones,” said Dr. Guy Samburski, the mission’s scientific manager. “That may cause the reactions to occur either faster or slower, we will only know for sure in time.”

The cost of the repeated delays are estimated at $350,000, that are added to the initial project’s NIS 2 million budget, which was paid for equally by the Israeli and Italian science ministries.