The quest to convert military technology for the civilian market is one that Israel’s defense industries have been on for decades, with only limited success

Israel Aerospace Industries (IAI) is conducting initial talks with VC funds and investment houses towards the creation of a new fund to help it convert the company's military technologies in favor of new products for the civilian market. IAI aims to establish a $30 million fund as a first phase, and later another $100-200 million fund. The plan has already been approved by IAI’s board of directors and the state regulators, with the first fund set to launch in 2021, after the company selects two groups by the end of the year—one of which will become a partner in carrying out the plan. IAI is Israel’s largest defense company, employing 15,000 people, 6,000 of whom are engineers. It operates in a range of fields, on land, on the sea, in the air, and in space, mostly in the missiles, radar, cyber, and unmanned vehicle sectors. In 2019, it registered 43 patents, on par with the Weizmann Institute’s Yeda tech transfer company and second only to Biosense-Webster.

The company has identified a long list of technologies and products that are suitable for conversion for civilian uses, including automated vehicles, aircraft that can take off and land vertically—which are suitable for cargo transport— satellite technology, cybersecurity, command centers, fiber optics, sensors and many more. “The goal is to take trailblazing military technology that is in the company’s possession and maximize them for the civilian market,” said Hezi Yisraeli, IAI’s Executive Vice President of Corporate Development, who is leading the initiative. “The partner we select will supply the experts in raising capital for projects some of which we will accompany until they reach a product and sales and some all the way to an exit. We will establish an investment committee to scout IAI factories, made up of people with the required security clearance who will judge which of the company’s wide array of classified technologies is relevant. It will also provide an avenue for initiatives by our engineers to propose ideas for startups that they can realize from within the company.” Over the next month, a request for proposals will be issued, which will launch the race to select a partner.

The quest to convert military technology for the civilian market is one that Israel’s defense industries have been on for decades, with only limited success. Back in the 1980’s Rafael was able to complete a sale to Verizon worth several tens of millions of dollars. It was also behind one of the largest exits in the field—Given Technology, which was sold for a billion dollars and developed the PillCam based on Rafael’s missile guidance technology. More than a decade ago, IAI itself presented the Taxibot, an automated hybrid aircraft towing vehicle, which aimed to reduce air and noise pollution at airports but so far has only been sold to a handful of buyers after airport regulators only permitted its use in a manned version. 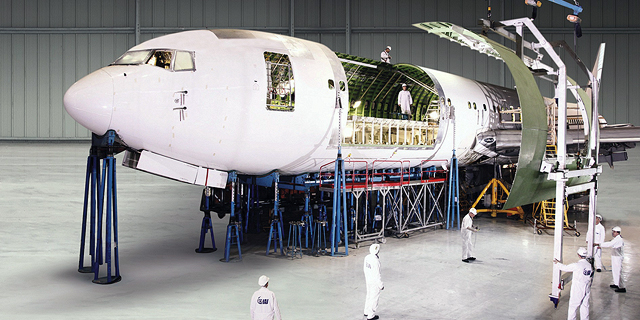 A passenger jet being converted at an IAI facility. Photo: IAI

“The technology, the patents, and the products of the IAI are among the pillars that Israel’s security rests on, with tens of billions of dollars invested in them,” IAI chairman Harel Locker said. “The company’s investment in research and development surpasses NIS 3 billion ($870 million) a year. As part of the company’s business revolution of recent years, we are working to convert and commercialize our products, patents, and technologies, for the benefit of civilian uses in the fields of healthcare, agriculture, and transportation, among others.” One project that has already gotten underway is an agreement with Australian mining company Bis. IAI will provide the company with autonomous vehicles for use in its mines. “We have been in the field of autonomous vehicles in the military for 15 years already,” said IAI VP and CEO of daughter company ELTA, Yoav Turgeman. “You can convert a 100-ton truck into a self-driving vehicle. The partner provides the money and we provide the technology.”