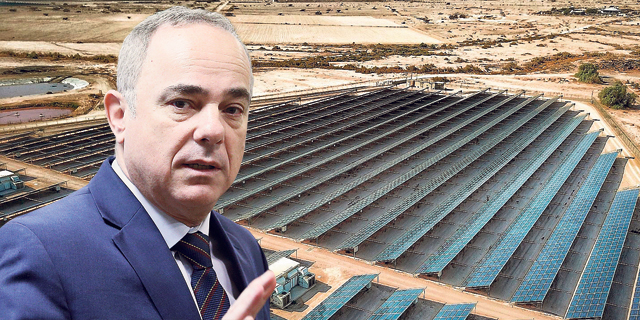 According to the proposal, in the next 10 years 30% of Israel’s electricity will be generated using alternative sources; electricity price is expected to rise to fund transition

A document from the Energy Ministry revealed that energy consumption in Israel will undergo dramatic changes in the coming years, including the widespread adoption of alternative energies. According to the ministry’s proposal as laid out in the document, such changes will save the economy billions of shekels per year. The price of electricity is expected to rise in the short term to pay for this transition, while energy costs in the medium-long term are expected to drop. Following the transition to renewable energies, natural gas exports are expected to rise. According to the document, at the beginning of 2021 the country will determine the amount of gas needed for the economy and will raise the gas export quota (under current laws the state is allowed to export only 40% of gas). If the state prohibits further construction of power plants, and the economy is heading toward relying on green energy regardless, then it will need less gas.

The proposal will be submitted to the government for approval, and redefine electrical consumption on the use of alternative energies. The proposal includes a list of measures that are expected to change the Israeli economy’s reliance on fuel, while focusing on using solar energy in place of power plants that run on natural gas. According to the state's assessments, transitioning to green energy will save the economy NIS 8 billion (approximately $2.4 billion) per year. However, the price of electricity is expected to rise some 2%-3% over the next few years to fund parts of this process. At the same time, the economy’s gas quota will be reexamined at the beginning of 2021, and gas exports are expected to increase. The state hopes that by 2030, 30% of its energy consumption will rely on renewable energy, updating its previous goal of 17%. It is an ambitious goal, not because it isn’t unattainable, only because so far the state hasn't met any of its set targets. For example, the state had determined that by the end of 2020, 10% of its energy consumption would come from green energy, while in reality that figure currently only stands at 8%-9%.

The new target involves generating electricity from solar panels and wind turbines, an action that requires the collaboration of several government bodies (Finance, Environmental, Interior, and Agricultural Ministries, and the Israel Land Authority and Planning Administration) for the construction of renewable energy facilities in “built-up areas and dual-use land,” such as water reservoirs. It also depends on the distribution of tenders to set up large fields with solar panels in the Negev desert. In order to encourage entrepreneurs, the government will grant financial support through loans “to establish renewable energy facilities and fixtures on existing buildings.” Entrepreneurs will also receive a tax deduction through 2025 on building such facilities. At the end of 2023, the plan will be reanalyzed and new targets will be set for 2040. The proposal calls for the construction of all private power plants to cease with the exception of four that are already in the planning process. The Energy Ministry claims that until mid-2030 the economy will need 4,000 megawatts of conventional electricity, and therefore did not approve plans for electrical generation that rely on natural gas at the nationwide level, until existing facilities are upgraded or existing units are replaced. This move has angered entrepreneurs that planned to construct new energy facilities, and pressure to revoke this clause is increasing. Entrepreneurs who are planning on constructing such facilities will need to reexamine the issue, however those who purchase the Israel Electric Company’s power plants will receive a green light for expansion of existing infrastructures. In the short-term, this marks a blow to the natural gas providers since their planned local sales will no longer be relevant. However, since natural gas exports are expected to increase the private providers as well as the state, which is currently working on plans to export liquid gas and the construction of a gas pipeline to Europe, will benefit long term. It does mean that atae and privately owned gas facility operators must find new customers abroad and invest billions of dollars in building new export infrastructures to maximize the market’s potential.