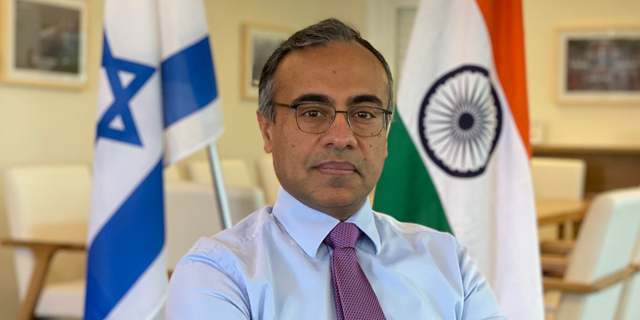 India and Israel need to harness each other’s strengths to cope better with fundamental disruptions happening in the world economy stemming from technology, decoupling between the world’s two largest economies, rising sentiment against globalisation, climate change and now coronavirus, says India's Ambassador to Israel Sanjeev Singla. Singla told CTech that major and complex geopolitical challenges faced by both countries require a strategic convergence between India and Israel, with trade being just one necessary part of the strategic partnership. "I think the sheer size of India’s economy - it is the world’s fifth-largest economy - and its depth and diversification not only offer a huge scale for Israel but also a base for exports to the rest of world and near-shoring supply chains," said Singla, who was appointed as the Ambassador to Israel last year after serving as Private Secretary to Prime Minister Narendra Modi since 2014. "Further, India has a huge reservoir of scientific and technological manpower which, combined with Israel’s strengths in niche areas, provide opportunities for having R&D and design centers in India (like many major U.S. tech firms have done) as also for collaboration in new emerging areas like AI and quantum computing that are harbingers of major changes in the economy. And, of course, both countries are vibrant democracies, something which is essential to inculcate an irreverence that drives innovation.

"We have to look at how we can use our mutual strengths to enhance the competitiveness of our economies at large," Singla added. "For example, it is one of India's software giants that is helping to increase the competitiveness of your financial banking services by establishing a technology platform for new banks in Israel - such as the New Digital Bank, Israel's first new bank in nearly four decades - and is building a complete banking services bureau."

India is regularly ranked among Israel's top-10 trade partners, accounting for 3.5% of Israel's total trade in 2019. But 2020 has, of course, been a far more challenging year due to the Covid-19 pandemic, which struck a painful blow to both India and Israel. India reported 47,638 cases of Covid-19 and 670 related deaths on Friday, taking the country’s tally of cases to 8,411,724, second only to the U.S. The total death toll in the country climbed to 124,985, third in the world behind the U.S. and Brazil. A remarkable 1.1 million tests on average have been conducted daily during the past seven weeks, according to the local health ministry. The economic toll has also been extremely high, with the International Monetary Fund's (IMF) World Economic Outlook (WEO) report from last month projecting that India’s GDP will contract by 10.3% in 2020. But it also predicted it would rebound by 8.8% in 2021, which Singla believes should encourage Israeli companies to come to the country. "Covid-19, obviously, has had a very serious impact on the world economy as a whole. That is evident in data that show sharp declines in economic growth rates for virtually every country, as also for world trade. Varying degrees of lockdown over the last eight months and very limited air connectivity has meant that merchandise trade has, quite naturally, been affected sharply," explained Singla. "The tech sector, on the other hand, has remained largely immune owing to the nature of work. But as the two countries emerge from lockdowns and as the connectivity improves, we should see a gradual recovery in momentum. In India, major macro indicators are now indicating a good economic recovery, and the big story is that the government has utilized Covid-19 as an opportunity to make the Indian economy more resilient and competitive." Singla said the Prime Ministers of both countries have spoken to each other several times during the pandemic and directed their teams to tap the scientific and technological strengths that the two countries have in order to accelerate the timeline with which Covid-19 can be tackled for larger good.

"Both countries have cooperated across the entire spectrum of Covid-19. One: on the personal protection equipment, where India supplied Israel with masks at a time when Covid-19 cases were rising in Israel during the first wave. Israel too supplied ventilators to some entities in India," said Singla. "At a B2B level, there’s even an Indian healthcare firm that has launched a disinfectant solution developed by an Israeli nano-coatings manufacturer. Two: on diagnostic kits, a team of Israeli scientists traveled to India to validate and calibrate, with the help of Indian experts, innovative non-invasive diagnostic tools that can diagnose Covid-19 in less than a minute. Information from over 20,000 samples done in India is now being analyzed in Israel to fine-tune these kits. Israel’s Zebra Medical Vision has collaborated with India’s Apollo Hospitals to use AI in diagnosing Covid-19. Three: on the use of AI to forecast waves of similar pandemics in the future, the two sides have designated nodal points but more groundwork needs to be done."

According to Singla, India will have a major role to play in the manufacturing of a Covid-19 vaccine, regardless of where it will actually be developed. "There are over two dozen teams in India working on a vaccine. There are two vaccine candidates in phase-2 trials and one vaccine in phase-3 trial. In Israel too, there are some teams working on a vaccine. But the point to remember here is that regardless of where a vaccine is invented, here or in India or elsewhere, it will be meaningless without India for the simple reason that India is a pharmacy to the world and the world’s biggest vaccine manufacturer. Already, several leading vaccine candidates from other countries have tied up manufacturing capacity in India to produce those vaccines on large scale." Singla explained.

Singla noted that there has been an issue of delays in long-term, multiple entry visas for business people and tech professionals wanting to come to Israel from India and he is hopeful Israel will soon roll out a new system to facilitate this issue. He also had some tips for Israeli companies looking to do business in India. "Given India’s continental size, one size doesn’t fit all. depending on the product, there can be a huge variation in consumer behavior and expectations and, thus, require different business models," he noted. "The Indian market, while offering a huge scale, tends to be highly price conscious, and there is a cultural emphasis on building relationships, something that takes time; hence, a rushed, transactional approach won’t take you very far. As Covid-19 subsides, India is, once again, open for business. We have restarted issuing business visas and we’ll be happy to assist any Israeli company exploring business opportunities in India." Singla highlighted six sectors he believes can benefit the most from cooperation between Indian and Israeli businesses, including: cybersecurity, fintech, health, defense, water and agriculture sectors.

"The cybersecurity sector is an area whose salience has been brought into sharp relief by Covid-19. And it has several verticals like banking, financial services and insurance, telecom and IT, all of which are growing in India," noted Singla. "Fintech is an area undergoing huge transformation in India. With over 670 million internet users, the Indian economy is undergoing a digital revolution and India is fast emerging as one of the world’s largest and fastest growing Fintech hubs. Five Indian Fintech companies have valuations of over $1 billion each. We rank third in the number of most promising Fintech companies in the world. The Unified Payments Interface is one of the biggest Fintech innovations to have come out of India and now accounts for over half of all digital payments in India that have risen sharply during Covid-19. About a couple of weeks ago, I read the story of how an Israeli firm, Tarya Fintech, is collaborating with an Indian partner to benefit from this digital revolution in India.

"The health sector, where keeping Covid-19 in mind, India is planning massive investment in public health infrastructure at primary level and where Israel has strengths in niche areas of biotechnology. Recently, I met your famous serial medical entrepreneur, Dr. Eyal Orion, to learn about some of his interesting innovations for cardiovascular interventions that could potentially be used in India," Singla added. "In the defense sector India has now allowed foreign companies to have a 74% controlling stake in joint ventures in India that could be used by Israel defence companies to increase their cost competitiveness and use Make in India (a government program aimed at encouraging companies to manufacture in India and incentivize dedicated investments into manufacturing) as a base for OEM exports to the rest of the world. In the agriculture sector, recent reforms are aimed at improving yields and investments in cold chains. In the water sector, our government is in the process of providing piped water supply to 250 million households by 2024 and Israel’s water companies have a huge opportunity. Israeli water companies have already successfully bid for many desalination plants in India."