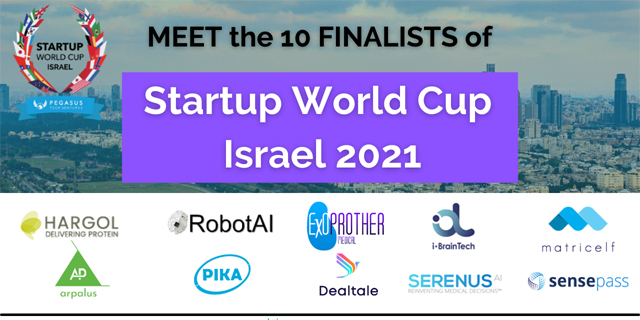 The final 10 candidates for the annual Startup World Cup have been announced, bringing them one step closer to competing in the global startup competition for aspiring entrepreneurs. The regional winner, who will be announced later this month, will represent Israel and have the chance to win a $1 million investment from its creator, Pegasus Tech Ventures.

The Startup World Cup is currently operating locally with the help of Tech It Forward, an Israel-based tech consulting and event agency. The Israeli winner will compete against startups from all over the world and a global winner will be announced in November 2021. In total, seven judges from VCs, investment houses, and law firms had interviewed 58 of the 100 applicants, with 42 not passing the initial filtering process.

The winner will be announced later this month. Photo: Meirav Kadichevski photographer

We are very excited about the event,” Jennifer Elias, Tech It Forward’s Co-founder told CTech. “It was really hard for everyone to (make) decisions, and we believe that the finalists represent well the trends of the coming year.” According to Elias, the organization is now rehearsing for the final that’s taking place in January, which will be streamed on Zoom and Facebook Live.

The 10 finalists who are taking part are as follows:

The original final date was supposed to be May 2021, but this was quickly postpoined due to Covid-19. It is a priority for the Pegasus Ventures team that all finalists - who will be flying to Silicon Valley from Israel and around the world - will appear for the final in-person and not virtually. Pegasus Tech Ventures investor and Manager of Startup World Cup, Noah Leshan, told CTech in December that the May date could be pushed back until Covid-19 vaccines are “globally and commercially distributed to 50% of the population.”

EDITOR UPDATE: an earlier version of this story had the finale date as May 2021. This has since been changed.