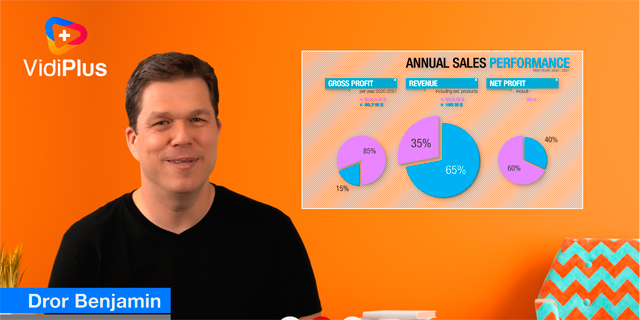 For the last year, millions of workers have moved to work remotely. Most of their days are now taken up jumping from a Zoom call to a Google Hangout, maybe a Skype, and finally a Facetime to check in with friends or family. It can be exhausting - so exhausting, in fact, that the pandemic generation has even coined a term for it: Zoom Fatigue.

Vidiplus, aware of the burdens of conducting everyday life through our screens, was founded in April 2020 by Dror Benjamin as a response to the dreaded ‘New Normal’. Its cross-platform virtual presentation software for video conferences helps them become a bit more engaging, allowing for 3D visuals, images, web browsers, or videos to appear on one side of the screen as the person speaks to his or her audience on the other side. 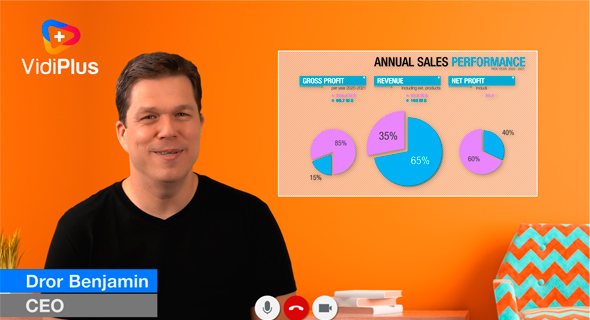 It’s one thing to speak with friends and colleagues over video calling platforms, but Benjamin had noticed a marginalized group of people who were suffering more than most. Notably, it was the sales and marketing teams, who need to demonstrate a product or service to potential customers. “When the pandemic started, I spoke with marketing and sales executives and asked them about their new challenges,” Benjamin told CTech. “They all talked about the same problems, the same things. They all talked about not being able to meet their clients face to face and not being able to demo their products. They also said there are a lot of sales cycles being stuck, mainly in the final stages of the funnel where physical meetings or product demos would have helped move things forward.” The technology itself is reminiscent of a movie-making tool like iMovie. It is a small bar at the bottom of the computer screen where the person giving the presentation can drag and drop items into a timeline. The tool can then integrate easily into platforms like Zoom, Microsoft Teams, Google Hangouts, and the newly launched WhatsApp Video on desktop, to help make their calls ‘pop’ with animations and videos appearing next to the speaker.

Benjamin had realized the need for such a tool after speaking to clients at his other startup, Arcreative Media, which creates virtual content for medical device companies. It likely explained the big, throbbing human heart that appeared on the screen as he demonstrated the technology to CTech. As Benjamin waved his hand on the screen, it became transparent so the viewer can see exactly what he was pointing at. Very useful for those who need to present a product, service, or tool over a video screen.

“I had a meeting with a sales person, and when I showed him Vidiplus he started to cry,” Benjamin said. “He said he was hidden behind terrible presentations for a year now and couldn’t do what he was best at. We are bringing it all back to the center of the conversation, which is crucial. And we’re making things as close as possible to real life.” As well as offering virtual presentation software for product pitches, Vidiplus also offers branding for those who may speak at online conferences, such as names and titles, color schemes in the background, and logo placements. Benjamin explained that a company headquarters can create their own timelines - or ‘projects’ - to then distribute them to global teams for a consistent brand message online. There are many ways that Vidiplus could be used to help combat the Zoom Fatigue felt by the Covid generation. Benjamin’s emphasis today is on sales teams - mainly for medical devices, automotive, and machinery - but theoretically, there’s no reason why such a tool couldn’t be integrated into teacher lesson plans for students suffering through their seventh hour in front of a screen. For now, Benjamin remains focused. “Vidiplus will be the next big thing for virtual sales and meetings for B2B companies,” he said. “We will help them solve the problem they have, the new problems. We will give them all the tools they need to be the best and shine in this new world that we’re entering.” Today, Vidiplus has 10 employees and remains a “lean” startup but promised CTech it is growing fast. While it is still depending on the foundations of Arcreative Media for now, Benjamin can anticipate Vidiplus being used long into the future once the pandemic subsides. According to his research, 80% of companies will continue to use the virtual landscape that has been created by Covid-19 and adopt tools to help these teams, as well as other aspects of their business. “I don’t think anyone would like to go back to how things were, so I think that one of the most important things is to help B2B people to be as productive as possible, instead of two meetings a day, now we can do 15,” he concluded.