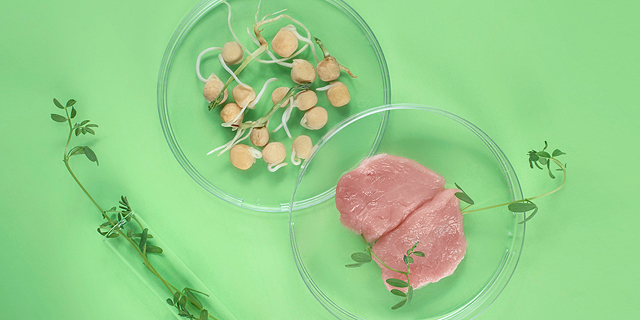 ChickP, Aleph Farms, and BioMilk all welcomed CTech for a visit into the future of food

Replacements for meat and dairy products aren’t new. For years, consumers have jumped on either short-lived fads or longstanding nutritional diets that seek to reduce the intake of red meat and milk-based meals. The reasons for this are largely the same: animal welfare concerns, the environmental impact of production, or simple personal dietary preferences.

Thankfully, there are companies today that prevent individuals from a life of tofu and soy milk. Israel-based ChickP, Aleph Farms, and BioMilk are three companies that invited CTech to visit their headquarters in the country’s foodtech capital, Rehovot, to understand some of the ways that cultured meat, cultured milk, or protein-based ingredients can transform foods from around the world. ChickP With an office in Rehovot but a food application lab in the central village of Rishpon, ChickP is set to rebrand ‘the mighty chickpea’. The company, which is developing a chickpea-based concentrate and isolate, can produce high concentrations of protein powder without allergens, taste, or texture that are found in conventional protein replacements such as soy or quinoa. “Protein has a taste, it doesn’t matter from which source,” explained Itay Dana, VP of Sales and Business Development. “Amino acids are sulphuric and have a taste. The industry needs to find a way to be able to reduce the off-taste.” According to Dana, the protein extracted from chickpea has less taste - and higher functionality - than other plants or beans, making it the perfect ingredient for food companies to purchase in quantities. 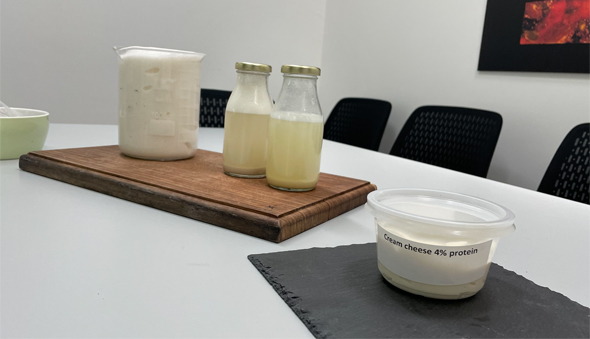 ChickP has developed two main products - ‘G’ and ‘S’ - that make up different textures and formats ideal for food companies to replace their ingredients with. For example, the former is a gel-type solution that could be adopted as a replacement for mayonnaise or any other food product that companies wish to make. The latter is a powder that could be used by companies seeking to make chocolates, dough, or health bars. At the visit to the food plant, CTech was given a health bar that was developed using ChickP’s protein as the main source. It tasted just like any other chocolate bar, which was perhaps the point - by providing the protein needed, the customer can focus on the taste they want to provide to consumers.“He (the customer) wanted it vegan and soy-free, healthier,” Dana explained as he handed it over for testing. “I don’t know the recipe, but from the components of health, he wanted it healthy.”

For Dana and the ChickP team, the goal isn’t necessarily to become a household name. Since its protein is a non-GMO plant protein free of allergens, hormones, and taste, ChickP can be used as the base ingredient for any company - even competing ones in the same space. “If Muller or Kraft will be happy with what we’re doing, and it works, it’s good enough for me,” he explained. “For ingredients, I want to be the Switzerland of the world - everyone uses my ingredients and I don’t want branding or a high profile.”

ChickP believes it can expand to all major food markets in the next two years. At the time of the visit, the application lab had six people, up from three just two months before. Aleph Farms Whereas ChickP is a behind-the-scenes operator of protein developers for food ingredients, Aleph Farms has opted to transform the food industry by producing cultivated beef by mimicking the natural process of developing whole-muscle beef used for steaks. In a future for Aleph Farms, the future has meat - but it’s grown from a 'BioFarm', not a a conventional one. “The idea is not to put an end to animal farming but to replace industrial farming,” explained co-founder and CEO Didier Toubia. According to him, 70% of the meat produced globally today is produced in industrial settings and factory farms which provide low-quality meat with lower sensory and nutritional quality. “We believe we can produce higher quality meat with a more efficient process without the environmental challenge or the animal welfare issues associated with industrial farming and slaughter.” 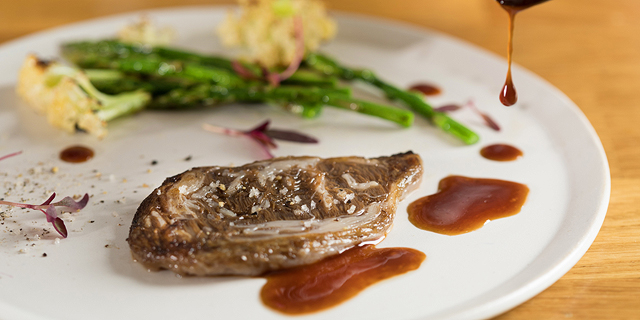 Aleph Farms has a laboratory in Rehovot that samples cow cells, stores them in a cell bank, develops different muscle, blood vessels, and fat cells in a cell bioreactor, and then grows the tissue in a tissue bioreactor to produce a steak. For all intents and purposes, it contains meat but prevents the ethical and environmental challenges of large-scale meat harvesting. CTech was not allowed to take photos of the lab but explored the various bioreactors and scientific equipment that was harvesting and storing cow cells. Earlier this year, the company revealed its images of its cultivated steak and hopes to be open to consumers in the near future. The company recently formed a partnership with Brazil-based BRF to bring its cultivated meat with one of the world’s largest beef producers. “The portion of Brazilians interested in alternative meat production is going up quickly,” explained Toubia. “There is awareness for alternative products... there is evidence that the young generation is more accepting of cultivated meat and the environment has a big impact on acceptance, as well. It’s true everywhere.” The steaks can be personalized to include specific fats, proteins, or fibers that “provide the chef with a lot of tools he does not have today” when preparing meals. There has been skepticism in how lab-grown meats can be personal given their scientific nature - literally born in a lab - but concerns are quashed since the chefs still have the ability to season and cook the meat to their liking. “With cultivated meat, you can control the quality and tailor the quality of the raw material you get to make exactly the type of dish, cooking, and experience you want for your consumers,” Toubia confirmed. BioMilk Meat isn’t the only product being cultivated in a lab. Across the road from Aleph Farms in the same city of Rehovot is BioMilk, a company that is doing a similar process with milk for dairy products. The company was founded officially in August 2020 by Dr. Nurit Argov-Argaman and Maggie Levy. BioMilk is based on 10 years of research that developed cow milk from mammary cells all in the comfort of a laboratory. After a decade of research, entrepreneurs approached the scientists and asked if they wanted to do to milk what others like Aleph Farms were doing to meat. 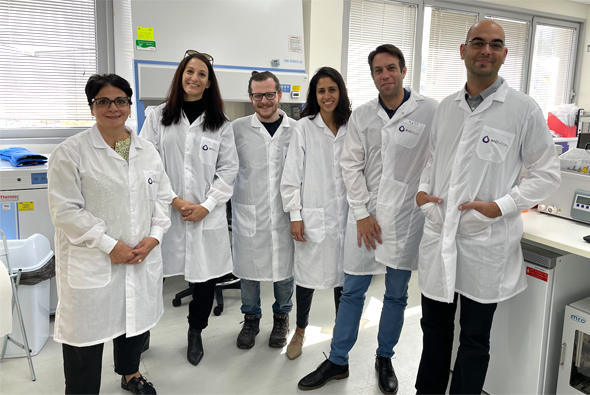 “(In terms of) the nutritional value, we aim it to be similar to milk, and better,” explained Argov-Argaman. “Because the cells can make everything they make in the bioreactor, they continue to have the same role as the mammary gland of the animal.” The company is aiming to succeed in three main areas: to create milk that is similar to the composition of commercial animal milk, to recreate human breast milk for new mothers and infants, and to produce high-level HMOs. Soon, it will be able to incorporate its milk, which is free of additives, into foods like yogurts, cheese, and other dairy items. One main project from BioMilk is Eve, the human breast milk for small babies. CEO Tomer Aizen predicts the baby formula market will reach $100 billion by 2024, and creating a nutrient that can feed the ever-changing needs of babies can be imperative to their development. “It’s desperate for alternatives,” Argov-Argaman added. “Eve is going to provide basically the same ingredients you have in breast milk, with the same structure and composition that is required to feed to the baby.” Breast milk is incredibly specific to the daily needs of each child, and even the time of day that feeding takes place can impact the components of the milk from the mother. On the spectrum of direct breast milk and formulas that are designed for babies of a variety of ages, Eve can be the middle product to help out mother and child. “We speak a lot about unicorns and all the companies reaching $1 billion dollar valuation,” added Nati Benchemhoun, VP Business Development. “Here, I think that we have the shot of not only being a unicorn financially, but an impact unicorn. The potential to impact the life of one billion people.” Israeli startups have been long disrupting sectors and spaces around the world. Whether it’s cybersecurity, healthcare, or gaming, the Israeli stamp on industries can be felt far and wide. Increasingly, companies are stretching their capabilities to expand into foodtech and changing our deity habits. These are just a few of the companies that aim to impact our world by protecting animals, the environment, and our health for generations to come.