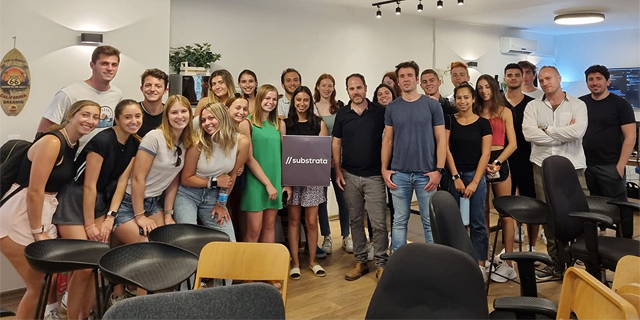 By analyzing interactions, hierarchies, and relationships in real-time, dealmakers can get a one-up on their sales or fundraising strategies

According to the famous ‘7-38-55’ rule, only 7% of our communication is done verbally with voice and body language making up the remaining 38% and 55% of how we interact with each other. The number is extraordinarily low, and yet there may be a new emphasis on its importance following the rise of Zoom meetings and the covering of our faces with masks still worn outside. Suddenly, our voice carries more weight and communicating over digital channels is becoming more regular in our interactions.

“I think we're the first and only company to analyze discreet power dynamics in negotiations, sales, and dealmaking situations between the two sides of the deal,” explained Ori Zuckerman, the CEO and Co-Founder of SubStrata. “We do that through a deep analysis of non-verbal social signals, usually conveyed through body language, vocals, and other discreet signals.”

Substrata works as an integration into communications platforms like GSuite, Zoom, or Teams, and helps sales professionals or entrepreneurs with their text-based communications. Anything from punctuation, capitalization, and response time is monitored and then optimized to help you keep the upper hand in your negotiations strategies. “You don’t want to be seen as too excited on the one hand, but then you don’t want to take your time because you don’t want to look rude on the other end,” he continued. “All these very human social considerations, we make maths out of them.” He stressed that while companies like Gong and Chorus focus on what was said in meetings, Substrata takes how the verbal and non-verbal cues were emitted and received in the conversation and gives live feedback. Zuckerman tells CTech that SubStrata is currently tailored to B2B sales teams and “high-stake dealmakers” like VCs, private equity companies, solo entrepreneurs who close their own deals, or those who deal with investment bankers, high-end real estate, hedge funds, or M&As. For $1,500 per user per year, the technology can offer people a chance to one-up the person they are speaking with to close the deals that could change their lives.

During an example, Zuckerman showed how SubStrata captures the tone of written emails and suggests the best time to reply. It will also be able to analyze the ‘turn-based conversations’ between two people, showing the balance - or imbalance - of cutoffs, interruptions, or confrontations. Currently, the company’s first patent is for audio abilities and soon it hopes to roll out video capabilities that will focus on posture, facial expressions, and more. Right now, the company is trying to overcome one of the challenges presented by our Zoom-led world: gaze alignment in the camera and where our eyes are looking on the screens.

It’s easy to see how SubStrata’s technology can be used in other sectors outside of sales or HR job recruitment. Think dating apps that can help nervous courters with their response times to new messages, or political parties who could train their candidates for more aggressive debate tactics. Even Zuckerman admitted that it could be a useful tool for defense industries and interrogation technologies, although he’s hesitant to politicize the company. “Our focus is on new relationships because the social signals are very specific. We are great when conflicts are there - even if they’re very covert.” Fascinating questions arise when SubStrata’s technology is used by people with different accents or cultural habits. While the company claims to be gender, race, and ethnicity-neutral, Zuckerman admits that usually “the stronger culture prevails” in negotiations, usually benefitting American English speakers. Cultures can be knocked or weakened depending on the number of participants in the meetings, and imbalances can occur and shift the ‘upper hand’ from one culture to another. “If there are more Chinese people in the room, the Chinese culture will be stronger,” Zuckerman observed. SubStrata was founded in 2019 by Zuckerman, Baruchi Har Lev, and Eran Yessodi who each serve as the company’s CTO and CPO. It is currently in the pilot stage and hopes to hit the commercial stage of its product in early 2022. So far, $1.15 million has been raised from nine investors, notably including SimilarWeb’s Co-Founder and CTO Nir Cohen who now acts as an Advisory Board Member. The company has also received the guidance of four professors who are in the field of social signal processing, non-verbal communication, reinforcement learning, and social sciences to help identify the exact traits needed for analysis. “People say people either have it or they don’t, and that you can't teach these things,” Zuckerman concluded. “My personal agenda was to always analyze those things that are unable to be analyzed. This is my own drive - curiosity.” 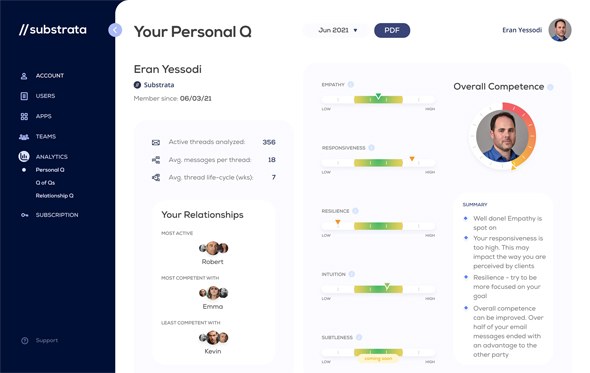