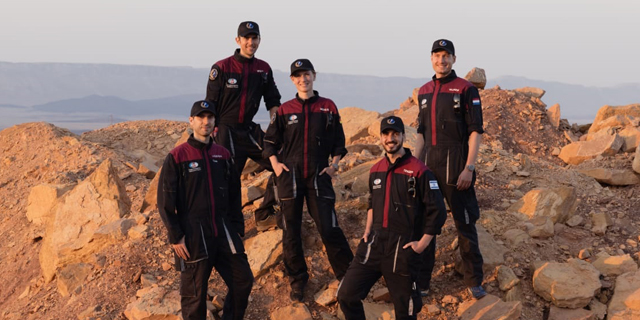 When it comes to space, the sky is not the limit. And when it comes to Israel, space exploration doesn’t end with the Moon. For the first time, the Israeli Space Agency in collaboration with the Austrian Space Forum (OeWF) will conduct an integrated Mars analog field mission in a protected dome - at Israeli research facility D-MARS - located in the Negev desert in Israel. The six-person crew entered the dome at 6 a.m. on Monday morning for the 21-day mission, which will be carried out in the Martian terrestrial analog. Using the Austrian Space Forum’s specifically developed Mars suit prototypes, the analog astronauts will perform more than 20 experiments in the fields of biology, medicine, psychology, geology, and engineering. The study involves 200 researchers from 25 different countries. The OeWF’s Mission Support Center in Innsbruck, Austria will monitor the mission and act as liaison to the science institutions and researchers participating in AMADEE-20. This marks the agency’s 13th Mars analog mission, which it hopes will contribute to future human and robotic exploration of Mars. 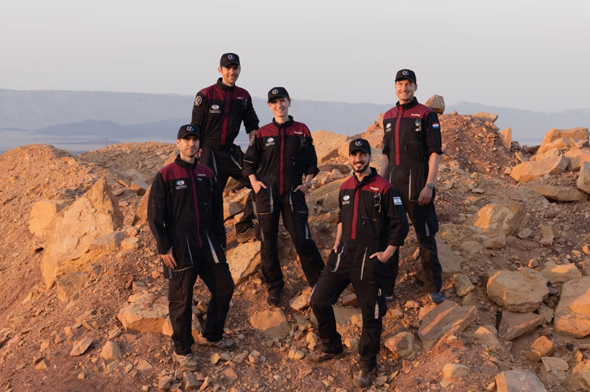 The test site is located in the Negev desert in southern Israel near the Ramon Crater. Although not an impact crater, rather a rare form of an erosion structure, it has a highly similar resemblance to various Mars surface features, and a variety of terrain types similar to Mars exploration. The test site offers a wide range of sand and rocky surfaces, and the site bears striking similarity to the Vallis Marineris structure on Mars. The selected analog astronauts are highly qualified experts who were trained by the Austrian Space Forum, and will be led by Commander and aerospace engineer João Lousada from Portugal, an experienced analog astronaut who already participated in two previous Mars analog missions in Austria (2015) and Oman (2018). The Austrian Space Forum chose five other experts from an international pool of 13 certified analog candidates, including Iñigo Muñoz-Elorza (Spain), Anika Mehlis (Germany), Alon Tenzer (Israel), Thomas Wijnen (The Netherlands), and Robert Wild (Austria). 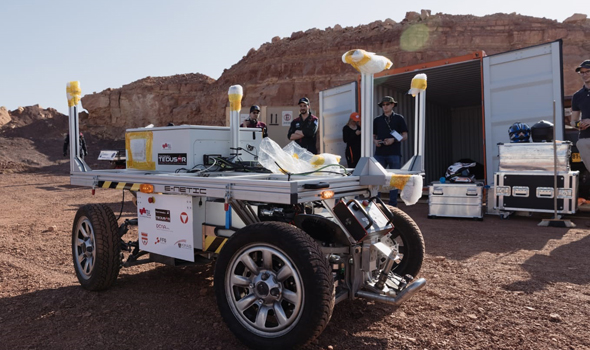 Part of the equipment that will be taken to the dome. Photo: Florian Voggeneder/OeWF

Of the many experiments that will be tested during the remote isolation mission in the dome, Israeli startup’s Stemrad’s anti-radiation vest will also be tested. The Stemrad vest is designed to shield the bone marrow and other sensitive organs against cosmic radiation. The experiment aims to protect astronauts on extraterrestrial surfaces whose gravity is less than the Earth - whether the Moon or Mars. Stemrad hopes to gain key answers on issues such as the weight, comfortability, and ergonomics issues faced by the astronauts wearing the vest while performing daily activities and any recommendation for future improvements. Avi Blasberger, outgoing-Director-General of the ISA noted that “our cooperation with the Austrian Space Forum and hosting AMADEE-20 in Israel is in line with our policy to support science, to be part of the international efforts for human exploration and to further our outreach and educational program. We are proud to be part of it and will invest all the required efforts to ensure its success.”

“The Israel Space Agency is a strong and reliable partner for our next Mars analog mission. With this mission, we will increase the fidelity of our Mars mission simulations even further. During the four-week duration of the mission our six analog astronauts will live and work at a habitat that is being provided by D-Mars and was specifically built for AMADEE-20. The Austrian Space Forum’s analog astronauts will perform more than 20 experiments in isolation to further facilitate the understanding of advantages and limitations of future human planetary missions. This will be the largest, most complex Mars mission simulation in 2021,” noted Gernot Grömer, Director of the Austrian Space Forum. “The purpose of simulating a Mars Mission on Earth is to prepare for future crewed missions on the Red Planet. The OeWF is one of only five research groups worldwide that has developed a prototype space suit which will be donned by the analog astronauts during their mission.”