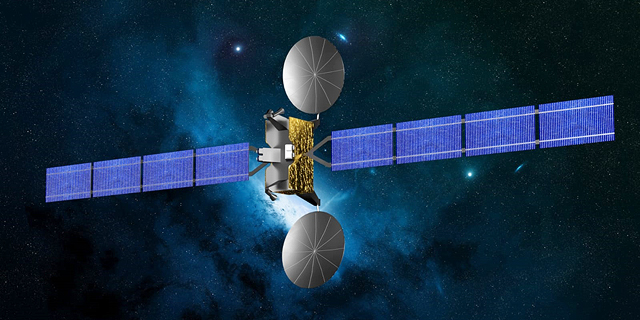 Israeli aerospace defense giant Israel Aerospace Industries (IAI) revealed its new GEO Mini Communication Satellite at the International Astronautical Congress (IAC) expo in Dubai on Monday. The advanced communication satellite weighs roughly 700 kg (1540 pounds) upon its launch and includes a complete digital communication payload weighing up to 200 kg (440 pounds). Due to its light weight, the satellite can be launched together in rideshares with other satellites, significantly reducing launch costs. With an expected life span of 14 years, it is designed to provide multi-zone communication services to customers or countries with diverse communication needs. The company also launched a proof of concept for Blue Sphere, a cloud-based ground station for satellites, which significantly increases information received from satellites and allows them easier communication with Earth at any given moment. Setting up a virtual ground station in the cloud enhances the availability of satellite output, and reduces dependency on a satellite passing over a specific ground station. Satellites are then able to broadcast information they collect to any available ground station worldwide. From there, the information is transferred immediately to the cloud, allowing the data to be extracted as needed, without requiring dependency on reception towers located on the ground.

The concept was developed by space engineers as part of an accelerated program at the IAI Innovation Center and in collaboration with the international Starburst accelerator, which specializes in aviation and space innovations.

The MCS mini satellite includes an advanced digital communication payload and "space smartphone" capabilities that provide operators with flexibility throughout the satellite's life. In addition, the command program and development architecture allow for applications to be easily loaded from a ground station during the satellite’s in-space operation, where operators can adjust and modify its assignments as needed. The MCS is fully-digital, is high performance, equipped with multi-band capabilities, cyber-protected, and enables scalability, modularity, redundancy, and a short-term response to traffic demand.

"The MCS is a testament to IAI's broad space capabilities, and features high-end space technology in a controlled-budget solution designed for countries and communication operators with no need for larger solutions. The mini satellite allows IAI to offer full satellite capabilities at a competitive price and expand into new markets. We are in touch with several global customers,” said Shlomi Sudri, General-Manager of IAI's Space Division, adding: “Evolution of cloud technologies makes satellite information available around the clock. Blue Sphere joins other innovative command and control developments that maximize satellite capabilities. Following the proof of concept, we are currently working on an advanced version of the ground and virtual command and control stations for our global customers.”