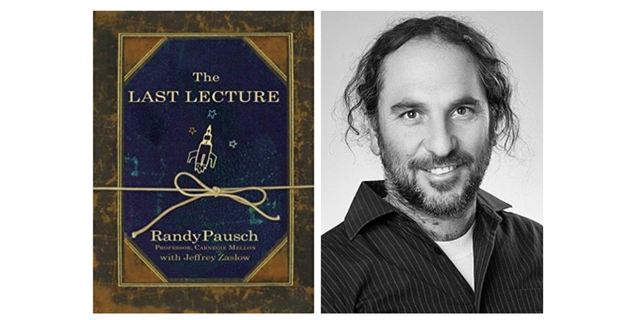 Irad Eichler is the Founder and CEO of Circles, an emotional support platform to help individuals overcome life’s challenges. He has joined CTech to share a review of “The Last Lecture ” by Randy Pausch. Title: “The Last Lecture”

Irad Eichler is the Founder and CEO of Circles. Photo: Avi Cohen/Amazon

The Last Lecture is the last lecture computer science professor Randy Pausch gave at Carnegie Mellon. In typical “last lectures”, academics think about what matters most to them and give a hypothetical "final talk" in which they share their wisdom that they’d like to leave with the world. But in Randy Pausch’s case, the title was literal: a month before the lecture, he received a prognosis that his pancreatic cancer was terminal, and he only had a few more months left to live. His lecture, which he titled “Really Achieving Your Childhood Dreams” discusses everything he wanted his children to know after his passing, such as stories from his life, and the lessons he learned along the way to ensure they live their lives to the fullest.

Important Themes: Overcoming obstacles (by seeing them as opportunities): I can’t emphasize enough how important this mentality is to have not only in life but especially at a startup. Anything worth doing is hard, and if it’s hard, you’re going to stumble along the way. You will. Either there’s going to be people telling you that you can’t, or deadlines that seem unreachable, or product ideas that just aren’t working the way you thought they would. But if you see them as obstacles, you’re already setting yourself up to stumble. You’ve already started to fall. Every obstacle is an opportunity. That’s how you overcome them. Something didn’t work? Now you know what not to do, and you’re closer to the right thing to do. Every hurdle is an opportunity to jump, and you can decide how high you want to go, which leads me too… Seizing every moment (because you have less time than you think): If every obstacle is an opportunity, then it’s an opportunity to seize. We don’t have as much time as we think we do. That’s just the truth. That’s heightened at startup, where you’re constantly fighting the clock. So if you have a moment, seize it. Have an idea? Execute it. Did something work? Celebrate it. Something didn’t work? Learn from it. Every moment can be seized, and it should be seized. Because we have less time than we think. So simply put: just do it.

The importance of having a positive attitude: At the end of the lecture, Randy says “Decide if you’re Tigger or Eeyore” (from Winnie the Pooh). Meaning, do you have a positive attitude, do you see the world with endless possibilities for goodness, or do you have the opposite? He, unsurprisingly, identified with Tigger and emphasized to never lose the childlike wonder. It’s just too important. It’s what drives us. For me, that’s key. Nothing is perfect. The world isn’t perfect, but that means there are so many ways to make it better. That’s what drives me every day: knowing that today is another day to make the world a little better. Knowing that it can be better and that it will be better. Every day at Circles we support people going through extremely difficult life crises and help them feel better. If I didn't believe we could do it, and the team didn't think we could do it, we wouldn't be able to.

What I’ve Learned: You can’t get anywhere alone: whether it’s the people you look up to or the people who work for you, everybody needs somebody. If someone offers you feedback, cherish it and use it. If someone is passionate about what you’re doing, find the best in them, help them maximize it, and together you will build something impactful. At Circles, we say that we surround our members with support. But that’s true for all of us as well: you need to surround yourself with support to get anywhere. If you do that, you’re already on the right path. To quote Pausch, “Don’t bail. The best of the gold is at the bottom of barrels of crap.”: Something is taking longer than you thought? Keep pushing. Something goes wrong? Find another way. Just keep working harder. It’s like the classic story: Two frogs fell into a bowl of milk and the bowl was seemingly too high and steep for them to get out. The first frog, thinking that swimming was futile, gave up and drowned. The second frog persevered and gradually the milk turned into butter, and the frog was able to use it to jump out of the bowl. Be the second frog. Don't bail. If you lead your life the right way, karma will take care of itself. The professional and the personal are more intertwined than you think. They affect one another. You’ll be surprised by how much what happens outside of your office affects everything that goes on inside of it. Live your life purposefully, regardless of whether you’re within those four walls, and you'll see results (in more ways than you think). Who Should Read This Book:

Anyone who is looking to make the most of their life, lead by example and leave a mark.