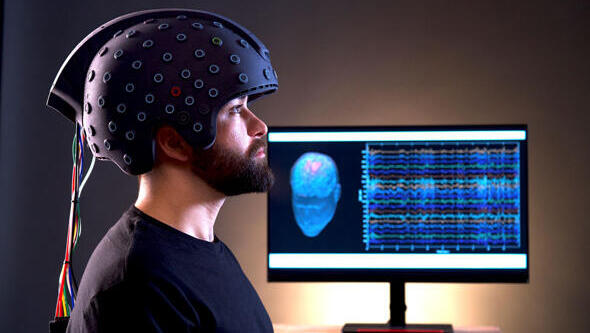 “We’ve made a GPS-system for the brain,” says brain.space CEO on back of $8.5 million Seed round

The data-neuroscience fusion startup’s unique helmet can map brain waves and will be donned by the next Israeli astronaut on his upcoming mission. “There are billions of stars in the sky and billions of neurons in our brain. We’re all connected,” CEO Yair Levy says

Microgravity has many unknown effects on the human body. Considering longer term space missions to the Moon or potentially even Mars, humans do not yet know how that could impact our very physiology. “Astronauts are being monitored in so many different areas, such as their heart rate, oxygen levels, body mass, and blood content, except for the most important organ: the brain,” brain.space co-founder and CEO Yair Levy told CTech in an interview.

Brain.space, a data collection-neuroscience fusion startup, has developed a unique headset that will be donned by next Israeli astronaut Eytan Stibbe on his upcoming mission to the International Space Station on Sunday. The helmet functions as a sort of portable EEG machine, measuring brain waves, brain activity, neurohealth and more. “There are billions of stars in the Universe, and billions of neurons in our brains. We’re all connected. Answering those questions about life is part of an amazing story,” added Levy, whose company recently closed a $8.5 million Seed round from Mangrove Capital and angel investor Sammy Segol. 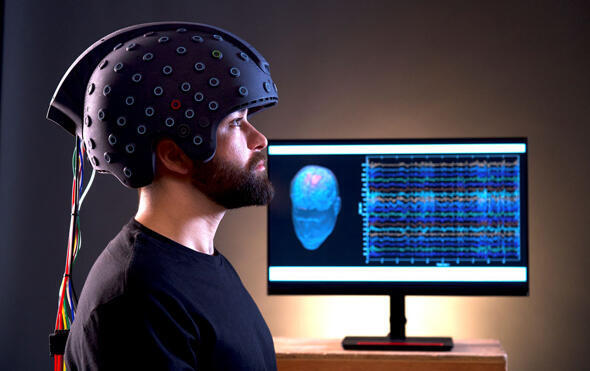 In order to be part of the list of 35 experiments being sent to space, the startup had to jump through many hoops to get there. That involved adhering to strict NASA regulations, altering their prototype to work aboard the station while being light enough cargo, funding the experiment’s trip, working sans batteries, while completing all of the above within a short two-month timeframe.

A startup within a startup

It all started back when co-founder and Chairman Dr. Shai Efrati’s 11-month old baby daughter fell and suffered brain damage. She eventually recovered from her impairment and her condition improved, once the team started to develop a monitoring device that could monitor her brain and provide treatment. The company’s team includes experts in fields such as neuroscience, psychiatry, bioinformatics, and software engineers who specialize in machine learning and artificial intelligence. “We’re a data collection company that wants to enable other companies to make use of the information we gather on our brains,” added Levy. “We’re a startup within a startup.”

The device is a helmet, (and comes in several different colors), and on the inside is equipped with 460 sensors that move and rotate to accurately fit a person’s scalp. That is more than typical EEG machines have - which must be attached manually. “We’re providing a GPS system for the brain,” said Levy, adding that the machine allocates every signal it records to a specific area in the brain. “We want to ensure that when we collect data we do it in the right way. Each sensor is designed to sit above a different functional area in the brain. We also standardize the data: we collect the data, and ‘clean’ it from noise such as other brain activity. When you blink or talk, it generates ‘noise’ to the sensors. Thirdly, we apply AI models to analyze data and provide brain insights. This helps other companies utilize brain activity to power their own applications. Lastly, we use a simple interphase and code, along with cybersecurity measures to provide an end-stack solution that gives us simple access to the brain,” he said. And knowing what goes on inside people’s brains is an age-old question, shedding light on what the future could look like. “It’ll be as simple as accessing any payment app, but we’re talking about the brain,” Levy added.

EEG scans can only be conducted by medical professionals, since the setup is complex, but using brain.space’s device, people can do so on their own since the system is automated.

The helmets can fit different scalp sizes, and are equipped to fit both genders. The company is currently working on its next-generation version. As of now, the headset will be worn by Stibbe, López-Alegría, and Connor. “We’ve been talking to Stibbe a lot, and have watched him do our baseline experiments. It’s a huge opportunity for a small Israeli startup like ours.” Once worn, the device shows the wearer a series of video games and short videos, where the subject must respond, thereby testing his or her mental acuity.

Becoming the golden standard in space

Measuring human brain activity for longer term space missions is crucial, added Levy, in order to properly monitor cognitive activity and mental health. The hypothesis, the team believes, is that physiological conditions will change in space and the astronauts’ blood pressure will go down, leading the heart to pump more blood into the brain. This, in turn, will have an impact on the human body by increasing brain activity, perhaps making the trio ‘more capable’ or ‘smarter’ in space, leading them to a sense of hyperactivity. Brain.space has partnered with Ben-Gurion University of the Negev on the research front, and is looking forward to obtaining the data.

While a lot of space tech companies are focused on the duality aspect - how technologies can be used on both Earth and in space - brain.space believes it is making its mark. “This is the first time something like this has ever been tried. We want to be the golden standard.” Using the data, people can see what types of treatments they need to heal their brain, whether that be lowering a mental load, practicing mindfulness exercises, getting psychological help, or medication.

The company employs 30 people out of its Tel Aviv offices, with employees’ age ranging from 17 to 78. It has high school boys and young women, senior citizens, and mid-aged scientists from a variety of fields. Brain.space is currently recruiting, and while it has no plans on going public, it is open to the idea of partnering with an academic institute or being acquired by a larger company.

“We are on a constant quest for answers. This is what drives us forward and helps us overcome tremendous challenges,” concluded Levy.