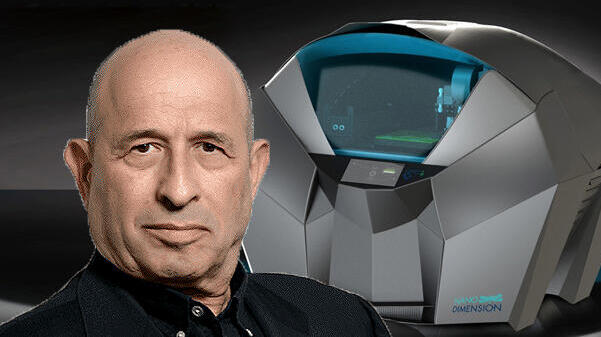 Nano Dimension raised nearly $1.5 billion in a series of public offerings on Wall Street in late 2020 and early 2021, but currently only has a market cap of $850 million

Israeli 3D printer company Nano Dimension announced on Monday that it owns 12.12% of the shares of American-Israeli manufacturer of 3D printers and Nasdaq-traded Stratasys. Nano Dimension’s stake in the company is currently worth around $150 million, with Stratasys having a market cap of about $1.26 billion to start the week.

Nano Dimension raised nearly $1.5 billion in a series of public offerings on Wall Street in late 2020 and early 2021, but currently only has a market cap of $850 million, well below the money in its account.

Nano Dimension announced earlier this month the acquisitions of Formatec Holding B.V for $12.9 million, which includes its two subsidiaries - Admatec Europe B.V. and Formatec Technical Ceramics B.V.. Admatec/Formatec, based in the Netherlands, are comprised of two complementary businesses operating together, which were part of the U.S.-based Precision Surfacing Solutions, a developer and manufacturer of additive manufacturing and 3D printing systems for ceramic and metal end-user parts.

Nano Dimension, which registered a loss of $201 million in 2021, previously acquired Deep Cube, Nano Fabric, Essemtec, and GIS for a total of less than $200 million.

With $521 million and $607 million of revenue in 2020 and 2021, respectively, Stratasys has far more business activity than Nano Dimension. Its products include smart and connected 3D printers, polymer materials, a software ecosystem and parts on demand.

Yoav Stern, Chairman and Chief Executive Officer of Nano Dimension, labelled the investment in Stratasys as strategic, which raises the possibility of a potential takeover down the road.

“The purpose of Nano Dimension in buying Stratasys shares is the formation of a strategic investment in a market-leader which is well established in a relatively seasoned market segment, while Nano Dimension’s disruptive technologies in AME and 3D metal printing supply its shareholders with value created by accelerated growth and expansion curves,” said Stern. “Hence, an investor in Nano Dimension will gain from its value creation in ‘blue ocean’ type AM sectors plus having strategic upside from investment in Stratasys, which enjoys a commanding presence in large, stable, more mature, mostly polymer-based AM technologies. In contrast, Nano Dimension’s material development thrusts and business model strategy are centered around metals with electro-mechanical conductive parameters, metals with superior mechanical qualities, dielectric material, and printing of multi-dimensional-electronic devices and mechanical parts.”

“Incidentally,” Stern concluded, “we may increase or decrease our investment in Stratasys, subject to market conditions and other economic factors, while keeping it under the framework and envelop which will evolve from the description above.”