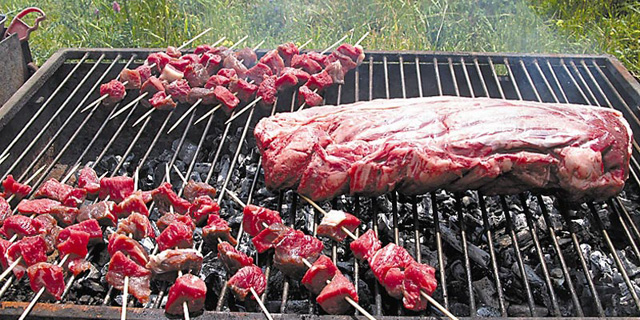 In Israel, There Is a Tight Bond Between Food and Politics

Israel’s Independence Day, or Yom Ha'atzmaut, which will be celebrated on Thursday, is the culmination of a series of religious and cultural events in Israel—kicked off in April with Passover—in which food plays a major part. In Israel, a tight bond exists between politics and food, according to Nir Avieli of the Department of Sociology and Anthropology at Ben Gurion University of the Negev. In April, Avieli spoke on an episode of Calcalist podcast “the Pill.”

“Think of our daily routine; it is all constructed around when we do—or don’t—eat,” Avieli said. “What makes the weekend the weekend is the food we eat on Shabbat. The same is true for yearly cycles and the special foodstuff that separate the seasons. So food has a very significant place in our personal and social lives.”

Earlier this year, Avieli published the book “Food and Power: A Culinary Ethnography of Israel,” which examines power dynamics and politics in the Israeli culinary sphere, from communal dining rooms in Kibbutzim, to the crowning of hummus—an Arab dish—as an Israeli national dish, and even to the food served to Palestinian detainees at a military prison. For almost a decade, Avieli has researched the food traditions of Yom Ha'atzmaut, which in Israel centers around the barbeque, or mangal, in Hebrew. The Yom Ha'atzmaut mangal did not become an Israeli staple until the end of the 1970s, he said—more specifically, following the 1977 Israeli legislative election for the ninth Knesset, during which the right wing, led by current ruling party Likud, won a majority of seats for the first time in Israeli history. With it, he said, Mizrahi Jews (those with ancestry in northern Africa and the Middle East) became more prominent not just politically but also culturally. With Mizrahi Jews’ social rise, the tradition of public barbeques ascended. The public aspect is a pillar of the tradition. The sight of hundreds of unrelated families crowding every available patch of green with portable grills and picnic tables as the smell of seared meat fills the air has become a familiar scene to any Israeli. The communality is the point, Avieli said. On Independence Day, people want to rub elbows with the rest of the nation. But Avieli said this sentiment is shifting somewhat in recent years. “Perhaps people no longer crave that familiarity,” he said. According to Avieli, a surprisingly popular trend in Israel is veganism—estimates put vegans at 5% of the population, leading some to claim Israel has the most vegans per capita, though Avieli is skeptical. A more interesting phenomenon in his eyes is the right-wing Israelis who feel the need to emphasize both their political identity and their veganism, via Facebook groups for example. “I think the bewilderment people express over the growing trend in Israel—I get at least one call a week from a foreign reporter on the subject—is related to the fact that Israel is conceived as a very militaristic society, by outsiders as well as from our own viewpoint,” Avieli said. “Israel is thought of as a country that is not tolerant to immigrants, to those different, very violent, especially toward the Palestinians—a society that doesn’t place the utmost importance on human rights.” Avieli does not see a paradox. Even if you equate being right-wing with being against human rights, he explained, there is more than 5% of Israelis that lean left politically.

However, a common explanation found among right-wing vegans is that animals are innocent—“have you ever seen a chicken with an explosive belt?” Avieli quotes a question posed to a colleague researching the subject. Humans, Palestinians in this case, aren’t innocent, the claim goes, and therefore do not qualify for protection.

The paradox is embodied in Aviv Kochavi, the newly appointed chief of staff of the Israeli military, a self-proclaimed vegan. “Why is it so interesting that he is vegan?” Avieli asked. “Why is it weird? It is because there’s an inherent tension in the fact that a person whose job is to inflict violence on others—chooses in his personal life he not to inflict violence on animals.”

3.
What's the issue?
I have no idea what this article is about...
2.
Being vegan and protecting our country do indeed go together!
When I became vegan I developed much more compassion towards people and others' opinions. Being vegan means recognizing that we do not have the right to take the life of someone who wants to live. Can't figure out how this writer sees that in conflict with serving in the army. When are kids go to the army they go their to protect our country, not to kill people. The writer is very disconnected.
1.
What a simplistic and stupid article.
What an ignorant thing to say. The Israeli army is filled with wonderful young people, many who care deeply about the country and do not join the army to inflict harm on others. About 20% of these soldiers (maybe more) are vegan and even more vegetarians. The majority of Israeli vegans choose to not eat animals because they feel compassion towards innocent creatures and don't believe we have the right to take their lives. That's it! That's the whole story. Why can't you have compassion towards animals (we all do!) and also protect your country?