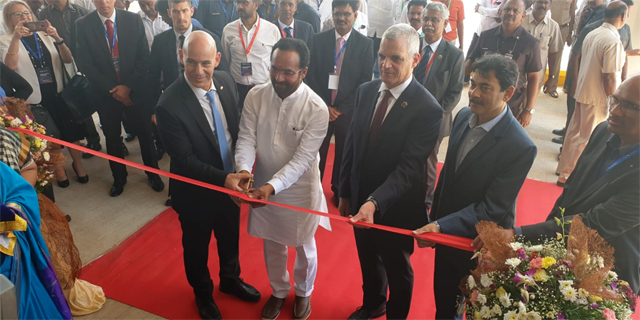 Israeli defense contractor Rafael Advanced Defense Systems Ltd. and Mumbai-listed Astra Microwave Pvt Ltd. inaugurated their joint manufacturing facility in Hyderabad, India on Tuesday, Rafael announced Wednesday. Located at the Hyderabad Hardware Technology Park and spanning more than 1,850 square meters, the new facility will be dedicated to developing and manufacturing broadband communication systems for the Indian Armed Forces, Rafael said. Recent years have seen bilateral relations between India and Israel blossom. India accounted for 49% of Israeli arms export between 2013 and 2017, making Israel the third-largest supplier to India, according to a 2017 report by the Stockholm International Peace Research Institute (SIPRI). Israel supplied 15% of India’s arms imports between 2014 and2018, according to SIPRI’s 2019 annual arms transfer report. In comparison, the U.S. supplied 12% of India’s weapon imports during that time period.

Inauguration of the new facility in Hyderabad. Photo: Rafael

Rafael has been active in India for more than two decades. In February, the Indian Air Force (IAF) had crossed the de facto border between the Indian and Pakistani-held areas of Kashmir for the first time since 1971, and fired multiple missiles utilizing Rafael-made Spice-2000 guidance kits, Indian news outlet The Print reported.

In 2016, the Indian government agreed to purchase 8,000 ‘Spike’ anti-tank missiles and 300 missile-launchers from Rafael. The missiles were supposed to be partly manufactured in India, but the deal appears to have been scrapped since.

Rafael is one of Israel's largest defense companies. In 2018, it reported more than $2.5 billion in revenues. Rafael employs more than 8,000 people in Israel, the U.S., the U.K., Korea, Australia, Brazil, India, and Thailand.