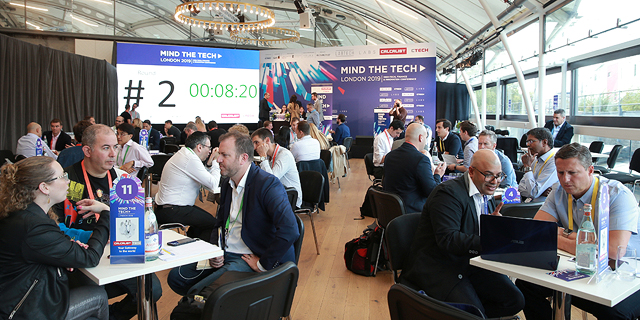 U.K. Investors: London's Tech Scene Has a Lot to Learn From the Israeli Ecosystem

Investors taking part in the Meet and Pitch event held during Calcalist’s third Mind the Tech conference in London last week tended to repeat one major advantage the Israeli ecosystem has. “What I love about Tel Aviv is that everyone is working within and for the ecosystem,” Alston Zecha, a director at London-headquartered venture capital firm Eight Roads Ventures, told Calcalist at the event. Even competing companies talk to each other and that is something the London ecosystem could benefit from as well, he added. The sheer number of startups within the Israeli ecosystem encourages cooperation and mutual inspiration, Mario Cohen, founder and CEO of Madrid and London-based firm Demtech Ventures, told Calcalist. Within an ecosystem where everyone knows each other, new companies are established on top of existing ones, utilizing the accumulated experience from older companies, he explained.

Hundreds of entrepreneurs, investors, and industry leaders from Israel and the U.K. attended Calcaist’s conference, including over 100 executives from Israeli startups. The conference included the Meet and Pitch event, which brought together Israeli entrepreneurs with executives in U.K. corporations and funds for a speed networking session.

Neil McGeough, the technology manager at British supermarket chain Tesco PLC, came to the conference to scout for technologies that can improve the company’s services throughout the supply chain. The Israeli ecosystem is vast and Israeli entrepreneurs have a can-do spirit that is very exciting, McGeough told Calcalist. He added that it is hard to say which technologies will prevail, but automation is definitely one of the key areas for every industry. Mike Martin, a senior investment manager at London-headquartered media and telecommunications company Sky PLC, said he wished he could spend more time in Israel and that, through its media and entertainment-focused fund, Sky is willing to invest much more in Israeli companies. According to Martin, Israeli entrepreneurs are very flexible and willing to pivot when it is the right thing for the technology they have developed.

Advantages and flexibility aside, some of the investors did criticize certain aspects of Israeli entrepreneurship. Eight Roads’ Zecha, for example, claims they are not very well organized and dislike office work, legal contracts, and bureaucracy. Zecha said this approach is understandable at the beginning but could become a problem later on as the business grows. McGeough, on the other hand, feels that the differences are part of the charm, with each company offering a different cultural viewpoint. It is impossible to expect a British company to operate like an Israeli company and vice versa, and this can lead to more creative thinking and more efficient risk-taking, he said. Demtech’s Cohen thinks understanding different markets and creating effective go-to-market strategies is not a strong suit of Istaeli entrepreneurs. Asian, European, and Latin American markets are distinctly different than the U.S. market most Israelis initially shoot for and entrepreneurs must be more attentive in creating the right business model for each location, he said.