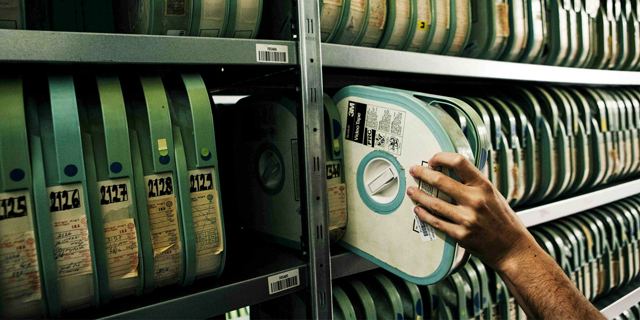 The digitization of the archive of the Israel Broadcasting Authority, one of the world’s largest digitization projects to date, is currently underway in a former Jerusalem brothel

A Jerusalem brothel turned dreary commercial space is home to one of the world’s largest digitization projects to date. A drive by the dusty building, located in the city’s southeastern neighborhood Talpiot, will reveal no hints of what is happening inside, but over the next five years dozens of people will roam its three floors, converting decades-worth of Israel’s public broadcasts from film to digital formats. The archive in question is that of the Israel Broadcasting Authority (IBA), the country’s public broadcaster between 1948 and May 2017, and the only local broadcasting authority until a second body for commercial television and private radio was created in the early 1990s. The vast amount of material has been conserved in various formats: 200,000 betamax tapes, 15,000 U-matic cassettes, 10,000 1 inch reel-to-reel tapes, 2,500 DV cassettes, and another 17,000 hours of film. Overall, the archive encompasses 400,000 hours of recorded material, and around 1 million hours of IBA footage, though at this point no one knows exactly how many hours there really are. Over NIS 190 million (approximately $54.6 million) were allocated for the project. Upon its completion, planned for 2024, anyone will be able to browse the new digital archive and watch fuzzy footage of historical events to their heart’s content. 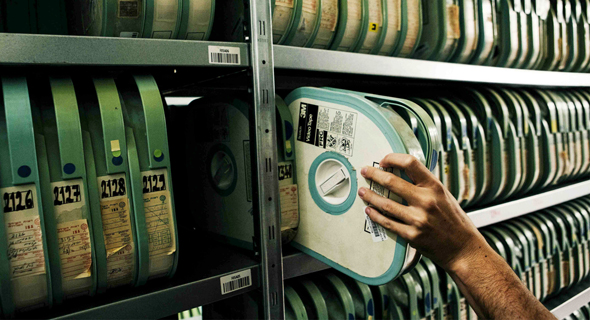 The project’s complexities necessitate an unusual combination of hi-tech and low-tech: robots, advanced image processing software, and artificial intelligence, alongside many working hands. Around-the-clock sisyphean work is required to tackle 30-year-old tapes that fall apart to the touch and film that has melted into itself.

Film, for example, must be rolled gently before it is cleaned manually with industrial alcohol by a glove-wearing employee. The bad condition of some of the film requires the use of perchloroethylene, a toxic liquid solvent mostly used for dry cleaning and degreasing metals, which is why a large ventilation system was installed to constantly air out the room. Then the film goes on to splicing: in the era before digital editing, sections of photographic film were cut and physically joined together using tape. All those parts need to be retaped, out of worry that the old splices will not hold up to the speed of the new machines. The more cuts, the more time-consuming the work is. 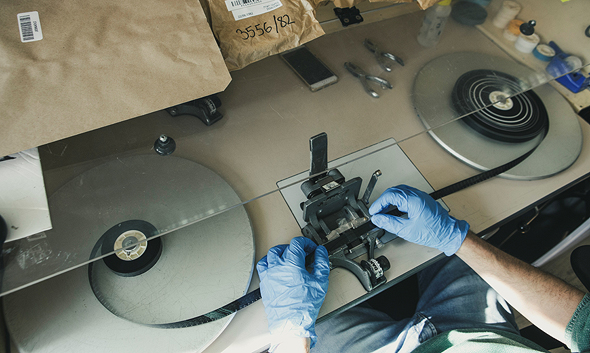 The material can then be converted from analogue to digital. The archive has two such machines, each costing $170,000. They scan each frame one by one—25 frames for each second of film—saving each frame as a separate photo. The frames are then put back together by powerful computers into a 2K resolution film, with each hour weighing 1 terabyte. A video editor then adds the original audio track, recorded on a separate magnetic film and converted as well. The software enables the editor to watch the final product and make necessary corrections.

On one screen in the editing room, in black and white, Israel’s sixth prime minister Menachem Begin gives a phatos-filled speech at a Likud party convention. On another screen, now in color, two Israeli soldiers stride towards a Lebanese village. The year is 1982. Welcome to the IBA’s time machine.

Like much of the IBA’s history, the digitization project came to life almost as if by a miracle. The archive’s materials, stored under suboptimal conditions in another location, nearly disappeared. The archive halls were decrepit and humid, with oxidized films releasing toxins into the air, according to Billy Segal Gezelius, head of archive at Israeli Public Broadcasting Corporation (IPBC)-KAN. Over the last two years, after IBA was shut down, the situation worsened. “You’d go into the bathroom and have to fight the cockroaches for it,” Segal Gezelius said in a recent interview with Calcalist. 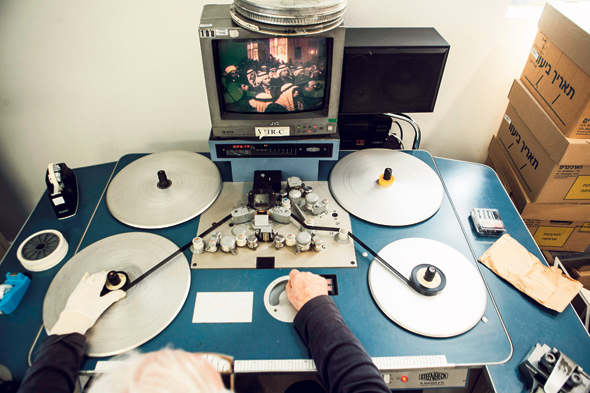 Israel’s Ministry of Finance has agreed to sponsor the digitization project, but would not transfer the money until things changed at IBA, Segal Gezelius said. Eventually, IBA was shut down, but the establishment of Israel’s current national broadcaster Kan ran into trouble, which jeopardized not only the digitization project but the very existence of the archive.

The archive is a conservation body but also a production body, and it needed to be placed under the umbrella of another organization or it would have run the risk of disappearing, Segal Gezelius explained. “There were multiple delays, until suddenly they demanded we evacuate the old property within two months.” She remembers days spent in the Knesset, fighting to organize a parliamentary tour of the archives so lawmakers would realize just how dire the situation was. In January, the archive was finally relocated to its new home in Talpiot.

The oldest material the archive holds is from the British Mandate-era radio station Jerusalem Calling, established in 1936. The archive is still awaiting material from the Israeli Educational Television, hidden in a warehouse somewhere in central Israel. “Every Sunday I receive around 2,500 tapes, which make up my work for the week,” said Dubi Felix, the representative for Dori Media Group, the production company hired to convert the archive’s video tapes. His room is loaded with complex equipment imported from Belgium for a total cost of over NIS 1 million (approximately $287,000). But before any equipment can be used, some of the tapes must be baked for exactly 12 minutes in an industrial oven heated to 50 degrees celsius, to dry accumulated fluid. Only then can they be cleaned and converted, using automatic robotic arms to operate the machines. 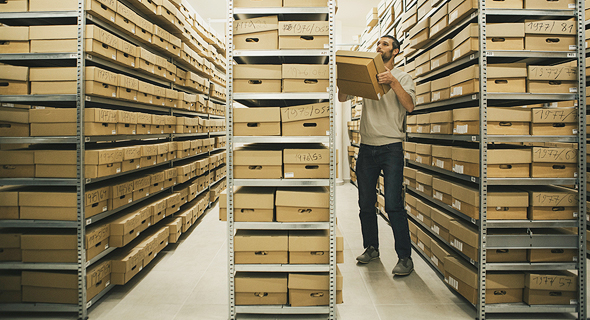 Felix’s 10 robots convert 300 hours of morning shows, news reports, documentary films, and holiday broadcasts each day. They reached 1997 in April, are now at 2002, and are expected to finish with all betamax tapes by the end of 2020.

“Recently, we watched the September 11 attacks,” Felix said. “It throws you back, and simultaneously you realize how much television has changed; how much we are now used to controlling the broadcast, fast-forwarding or rewinding, when once you could only sit in front of a screen and watch what they chose to broadcast.”

On the way to Segal Gezelius’ offices one passes by the storage floor. In one area, blue boxes stacked together on high shelves contain 1 inch reel-to-reel tapes and a lot of memories, the best of the programs broadcasted by Channel One, one of the oldest television channels in Israel. A memorable episode of 1980s-era animated show Snorks is stored alongside 1986’s Eurovision broadcast. More surprising, however, is what’s missing from storage: newscasts. Arguably the material with the highest archival value, newscasts were systematically erased due to a short-sighted IBA decision, made decades ago, to reuse 1 inch reels to save on the high costs of film. Today, it is almost impossible to find news broadcasts of Mabat LaHadashot, Israel’s first televised news program, dated earlier than 1986. 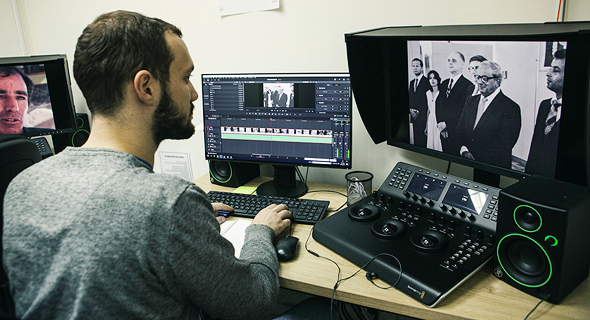 To save costs, IBA also diדcarded raw footage, Segal Gezelius said. Such material was kept only for important events like peace agreements or wars. “Sometimes a reporter would ask that the raw material be kept for future use or for legal reasons.” No consistent tracking of raw footage was kept, either, she said. “This week, for example, we happened upon raw footage of an in-depth piece about Israeli paratroopers in Lebanon. We estimate that the raw footage was kept because the military censor banned it at the time. We can hope that now, when censorship is no longer relevant, we can upload it to the website. We reached an agreement with the censor that everything that was banned from publication in the past will go through them again before we upload it.” While the newscasts were erased, the reports they included were kept and are being converted for upload. Here the archive runs into another problem: cataloging. In the age of big data and immense databases, everyone knows that it is not enough to collect content: if you cannot catalog it in a way that will make it easily retrievable and approachable to the public, it is near useless. NIS 25 million (approximately $7.2 million) of the project’s total budget is therefore allocated just for that. At the time, each report was kept thus: into a brown postal envelope went the films and audio tapes, along with paper sheets listing the teleprompter text. While those sheets, which will also be scanned and uploaded, can reveal the subject of the report and who the main people interviewed are, they do not reveal information about other people that appear in the piece, or enable more extensive cataloging. “It is important to us to create a convenient portal for the public that will also allow us flexibility and creativity,” Segal Gezelius said. The archive is still looking for technologies and vendors that will enable AI-based search inside the footage itself. The IBA’s cataloging system contained very basic information, according to Dishon Bilgory-Gretz, vice president of technology at KAN. “You’d see an item’s number on the computer and then go look for it on the shelves, hoping it will be there. Now we re-numbered everything and gave each item a barcode. For the news reports we will scan the text and implement optical character recognition to enable integration of the text into the website’s search engine.” They are still searching for technologies that will enable automation of information contained in the broadcast material itself, he said.

Whether or not they are fueled by a unique sense of purpose, the archive’s permanent 10-person team displays energy more often associated with a young startup rather than a dinosaur of old-school media. “There are many small excitements,” Segal Gezelius said. “For example, when you find a special or exotic photograph and immediately call everyone to see. Those who work here love the nostalgia, and have a historical point of view and extensive knowledge in many fields. Because we are a producing archive we have daily contact with many elements, making this place very lively.” Far from being a capable record keeper, Israel until now had to rely on non-Israeli archives like the Steven Spielberg Jewish Film Archive or the cooperation of occasional photographers of an historical event. For 25 years, IBA was a television monopoly. De facto, it was also a documentation monopoly. Segal Gezelius believes that this huge project, the first of its kind in Israel, will not only meet the deadline but precede it. If it will, by 2024 the Israeli public will have access to 22 petabyte-worth of video and audio content narrating their national history.