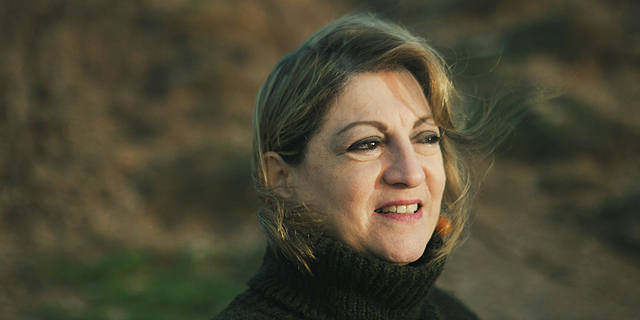 Natural resources economist Sinaia Netanyahu, the last chief scientist of the Israeli Ministry of Environmental Protection, speaks about the Israeli government’s failure to bring its energy industry into the 21st century, and explains why the ministry she worked for until 2018 is no longer relevant

Israel has committed itself to gas and is suffocating itself with more and more gas-based ventures, according to natural resources economist Sinaia Netanyahu. The chief scientist of the Israeli Ministry of Environmental Protection between 2011 and 2018, Netanyahu strongly believes Israel should disengage from gas and work to find greener alternatives. “I am not saying we should not use gas anymore, but use existing power plants, the large facilities we already have,” she said in a recent interview with Calcalist. “We are cementing infrastructure that is going to be with us for the next 70 years. We needed a framework that would have enabled us to backtrack when other energy alternatives became available,” she said. “The more Israel ties itself to these infrastructures, the more it will need to justify them financially, and pay for them.” 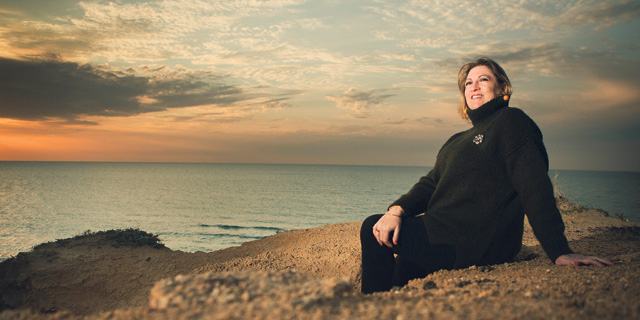 Netanyahu—the surname is a remnant of her first marriage, to one of Prime Minister Benjamin Netanyahu’s cousins, Israeli computer scientist Nathan Netanyahu—does not mince words. Aside from her work as the ministry’s chief scientist, she worked with both the public and the private sector, serving as a consultant to various governments, the European Union, and the United Nations Educational, Scientific and Cultural Organization (UNESCO). It is doubtful whether there is a professional in Israel more capable of analyzing the country’s natural resources and changing climate, and their environmental, social, economic, and medical connections and ramifications. It is doubtful that someone else is more capable of seeing the big picture they all create. And the big picture, according to Netanyahu, is grim. A series of blunders in the way Israel handled the gas fields means the country is shackled to gas for years, maybe even decades, at the expense of developing alternative energy sources, particularly solar energy. Israel, Netanyahu said in her first interview with the press since stepping down as chief scientist, has no energy or environmental policy, and its environmental protection ministry is an anachronistic, superfluous body. Thousands of Israelis die every year due to air pollution, more are getting sick, and quality of life is going down, Netanyahu said. “According to the World Health Organization, in recent years almost 1,900 Israelis die annually because of exposure to air pollution, related to one specific pollutant called PM2.5,” she said, referring to atmospheric particulate matter (PM) that has a diameter of less than 2.5 micrometers. “And that is without looking at other emissions, and as we know there are other pollutants in existence.” The need to reduce pollution, therefore—of the air, water, and earth—is acute. Once, gas was thought to be the answer to the country’s energy problems. Netanyahu thought that, too. “I supported gas because it was an alternative to coal,” she said. She still thinks the Tamar gas field, one of Israel’s largest gas fields after Leviathan, needed to be utilized more. At the time, she and her colleagues demanded that the amount of gas coming from Tamar would be increased, for example by building a second pipeline or augmenting the existing one. The aim was to make use of the field as much as possible, as long as there were no alternatives. But reality changes. “The gas came too late,” Netanyahu explained. “Drilling is a decade late.” At the time, she and Shlomo Wald, then chief scientist of the Ministry of Energy and Water, thought a framework for backtracking in 2020 should be prepared, in case alternative technologies already existed. “In 2012, we didn’t know how much gas was in Tamar, how much would be discovered in Leviathan, but we also didn’t imagine that there would be technologies that would free us from relying on natural resources. Solar panels, for example, today create energy much more cheaply than gas. Since we didn’t know that at the time, decisions should have been made carefully, without fixating on one avenue.” As it stands, Netanyahu said, Israel doesn’t even need Leviathan; Tamar’s gas reserves should last at least two decades, and by that time Israel should long be reliant on alternative energy sources. But that isn’t happening, as Israel is chained to gas. “Recently, a plan was announced to connect to the gas network 18 planned neighborhoods, for private consumption purposes. At the start of the third decade of the 21st century there is no reason to lay a gas pipeline to new neighborhoods. There are also plans to set up small gas-based power plants near cities. Aside from the fact that it is an environmental hazard, what if the price of gas rises? We don’t need to encourage the construction of those plants, we need solar energy.” Netanyahu does not beat around the bush when it comes to the reason behind Israel’s insistent reliance on gas. It is not energetic security that motivates the development of these ventures, she said. “The economy is supposedly flourishing, but Israel is suffering from a large deficit, and the finance ministry is hinting at raising taxes. Additionally, we have a prime minister and an energy minister who are saying we’ll all get rich off gas and set up a wealth fund.” That potential wealth fund has yet to see a dime, but the state is banking on gas taxes, she said. “Another issue is that the gas companies have debts to financial entities, and the goal of the regulators is financial stability. If one of those gas companies goes bankrupt tomorrow, the state will need to bail it out and pay those debts.” That is why Israel has no environmental or energy policy, but rather a fiscal one, she said. “Because they promised the public billions for the wealth fund, and because they don’t want those partnerships to fail, necessitating the state to intervene and invest money of its own.”

The matter of government supervision—or lack thereof—does not end there. Around a month ago, residents who live on the coast near the Leviathan rig evacuated from their homes for fear of pollution during the cold vent phase of the rig. “Were I a resident there, I wouldn’t evacuate due to air pollution, but rather as a form of protest,” Netanyahu said. “The environmental protection ministry handled public concern completely wrong.” 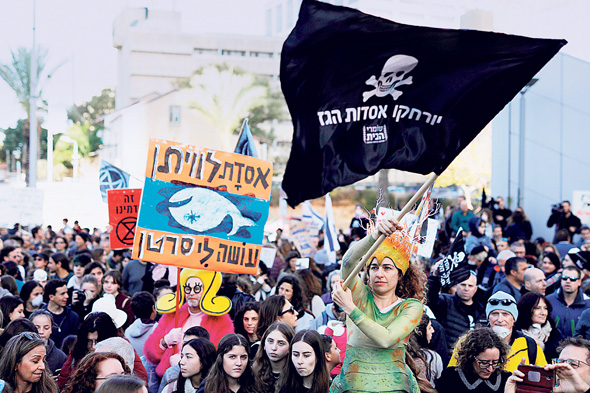 A year and a half ago, during a conference, the ministry’s air quality unit head said that according to the data provided by Nobel Energy, one of the Leviathan rig’s owners, there was no need for worry, Netanyahu said. Two very respected scientists then criticized him for relying on Nobel’s own data. “Who do you expect the public to believe? It is not by accident that the state comptroller report from May said the ministry shows weakness in the face of the industry.” There was a time when the Tamar rig was not regulated, she recounted, and the initial data provided by the owners showed very little emissions—but five years later it turned out it was 10 times as much. “Today they say they reduced emissions by 95%, but we can’t really know because there is no comprehensive report, only a selective sampling.” It is okay for a country to admit it does not know enough and contract external experts, Netanyahu said. “Oil and gas drilling are a complex sector,” she said. “The environmental protection ministry employs, to the best of my knowledge, only one person who specializes in rigs, and no dedicated unit.” But to understand and deal with the environmental, safety and security, and operative repercussions of gas rigs dozens of specialists are needed, not one person, she said. She herself tried to push for such a change as chief scientist, she said, but was always told there was no money. She did manage to divert a budget from a different program, resulting in a report written by three scientists from the Technion about Tamar’s emissions—a report that eventually led to the decision to increase regulation of the rig. Electricity generation needs to be decentralized, to reduce dependence on one source and better safeguard against the forecasted extreme climate changes, such as storms and floods, Netanyahu said. The industry should be much better regulated, and oil refineries should be shut down gradually, she said, as 20 years in the future people will consume less plastic and petrol. Regulators should also push for wider adoption of public transportation solutions and electric vehicles, and to get as many cars off the road to reduce pollution—”in 30 years the population will double itself, and if we don’t do it we won’t be able to move.” Marine import should also be more strictly regulated, she said, as ships create much of the pollution experienced at the coast. The environmental protection ministry needs to be more active and communicate better with the public, which is infinitely more savvy and knowledgeable nowadays, Netanyahu said. But while it is a ministry that needs to be at the forefront of science, it has not had a chief scientist since she herself has stepped down, and the same is true for two other ministries that are critical for Israeli economy and for public health—the Ministry of National Infrastructures, Energy and Water Resources and the Ministry of Agriculture. Everything is interconnected, Netanyahu said, which is why she thinks the environmental protection ministry, in its current capacity, is no longer relevant. “When it tries to advance needed initiatives and protect the public, other ministries put a stop to it, claiming it causes them delays in project development,” she said. “And environmental concerns are not a separate issue, they are connected to energy, to agriculture, to transportation, to healthcare, and more.”

The solution, according to Netanyahu, is for the government to establish a national environmental authority with representatives from all relevant ministries. Many of the current ministry’s authorities should be allocated or returned to other ministries, she said—all things related to nature should be the aegis of the Israel Nature and Parks Authority, for example, while industrial regulation should be the responsibility of the Ministry of Health. The new authority, which will employ researchers, will need to be independent and transparent, she said. “Currently, the tools available to the environmental protection ministry were right for the previous century, but they are not right for current challenges and for climate change, and that is not being addressed.” A spokesperson for the environmental protection ministry told Calcalist that natural gas is a bridge to an economy that best integrates renewable energy and energy storage, enabling the closure of polluting coal plants. The ministry believes in its way, and is confident that the public interest is to expand and strengthen it, “just as Dr. Netanyahu thought during her tenure.” Regarding the Leviathan rig, the ministry has worked to build public trust transparently, released data, and identified unreliable energy provided by Nobel, the spokesperson said, working to safeguard the public interest.