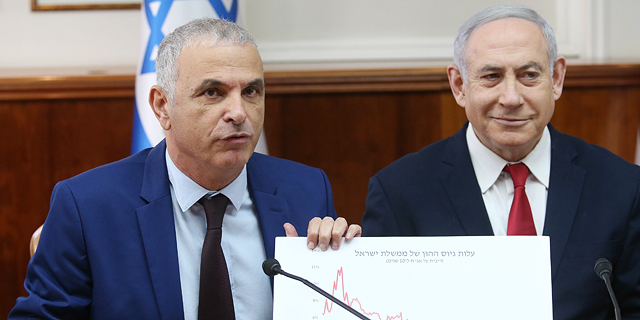 S&P Is Overconfident About Israel

The credit rating agency reaffirmed Israel’s AA- credit rating over the weekend, downplaying concerns about the country’s local political limbo and its effect on the mounting deficit

Standard & Poor’s (S&P) reaffirmed Israel’s credit rating at AA- over the weekend, no doubt leading Israel’s Ministry of Finance officials to release a collective sigh of relief. While less exciting than an upgrade or a forecast of an upgrade, it is still a favorable outcome when taking into account Israel’s continued political limbo, its chaotic budget situation, and its rising deficit. S&P projects that “Israel's diversified and resilient economy will expand by an annual average of 3%” until 2023, thanks to the strong employment market, the start of operations at Israel's largest gas field Leviathan, and the country’s gas export. Government debt is expected to pick up slightly due to fiscal deficits, before “fiscal consolidation measures are fully implemented in 2021 and beyond.” Long term growth, however, could be lower due to structural challenges of the Israeli economy, such as its housing and transportation problems, and the low participation in the employment market and low skill levels of minority groups such as ultra-Orthodox Jewish (Haredi) men and Arab women.

S&P does acknowledge that “high exposure to external and domestic security risks remain a concern,” and that a significant increase in the debt to GDP ratio could hurt Israel’s economy and therefore its credit rating. While S&P did not ignore Israel’s political pandemonium—the country is headed for a third election in March 2020 after its April and September elections proved inconclusive—the credit rating agency does not seem too worried. “Our key assumption remains that Israel's strong institutions will weather the ongoing political turbulence reflected in a third consecutive snap election,” the report’s authors wrote, adding that there is political consensus on the need to contain public debt and keep it under its current level of 60% of the gross domestic product (GDP). Reading the report, it is hard not to wonder how well S&P understands the complex political situation in Israel. The neck-to-neck fight between Prime Minister Benjamin Netanyahu and aspiring prime minister Benny Gantz will in all likelihood turn the next government into a marketplace of coalition agreements. It is too early to tell what demands the left-wing parties will have—and if they will at all be relevant. What is clear, however, is that the ultra-Orthodox Jewish parties will have many demands, and, to date, Israeli politicians have proven to be nothing if not compliant.

But it is about more than just the ultra-Orthodox parties. One only needs to recall how, at the end of 2018, Netanyahu and finance minister Moshe Kahlon agreed to allocate NIS 20 billion (almost $6 billion) for police pensions and salary raises, with no economic justification or fair budget rational. One government decision could have put a stop to it, but in the battle for the prime minister’s chair, the end justifies the means, even when it comes to the public’s money. Will reducing the deficit be at the top of the agenda of the winner, be it Netanyahu or someone else? While unlikely, there is always room for hope. Otherwise, we will all be paying for it through the nose in the next few years. S&P is optimistic—too optimistic—about the future government’s ability to take on mid-term problems, like the deficit. They are less confident about long-term concerns such as minority participation in the employment market, Israel’s struggling public transportation, and the many failures of its public education systems. With the main political candidates running on platforms that don’t even touch on those issues, who can blame them?