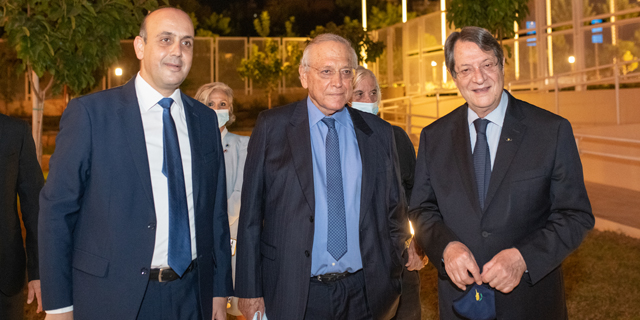 The institution will award graduate degrees and focus on problems facing east Mediterranean countries, such as water, security, and energy

President and Founder of IDC Herzliya, Professor Uriel Reichman, this weekend launched a new academic venture in Cyprus. The Pafos Innovation Institute (PII) will be a center for regional cooperation based on research to help people in Cyprus and nearby countries by granting students graduate degrees. It was launched in the presence of Cyprus President Nicos Anastasiades and included an address by Israel’s President Reuven Rivlin and Pafos Mayor Phedonas Phedonos. “Winds of peace are blowing in the Middle East, but peace is a fragile thing when it relies only on declarations of states and official agreements,” said Reichman. “I believe in creating relationships and friendships through education and research, and it is for that purpose that the Pafos Innovation Institute was established.”

The PII will invite people from around the world to study towards graduate degrees in research and build entrepreneurial collaborations impacting the lives of Eastern Mediterranean citizens. Specifically, it will focus on some of the region’s most pressing challenges, such as integrated water resource management, energy, data-driven management, entrepreneurship, and food security. It aims to work in partnership with industry, academia, and the public sector.

“With the leadership of IDC Herzliya, this institute will become a center of cooperation between scientists, students, startups, and will bring together students from Israel, Cyprus, and the entire Middle East,” said President Rivlin via video address.

Mayor Phedonos of Pafos, which is a twin city to Israel’s Herzliya, thanked Reichman and the IDC for their “professionalism and dedication to the project.” Cyprus’ President Anastasiades called it “a product of the growing cooperation between Cyprus and Israel” highlighting not only technology and education but also security and the war on terror. “In order to realize the potential of the relations between our two countries, we want to see not only agreements and cooperation between governments but also between the citizens of the countries themselves, working and creating together,” he added. The PII is a non-profit organization and academic institution certified to grant MAs and MBAs that are recognized between Cyprus and Europe. IDC Herzliya will operate the academic management of the institution in collaboration with researchers from the Middle East.