"Our monthly processing volumes grew by 5,000% over the last 18 months and that is also an unfathomable figure for us," said CEO Matan Bar

Israeli fintech company Melio announced on Tuesday that it has raised an additional $250 million, tripling the company’s valuation to $4 billion since January 2021. The Series D round was co-led by new investor Thrive Capital of New York, along with existing investor General Catalyst. U.S. investment firm Tiger Global Management also invested in the round, along with existing investors Accel, Bessemer, Coatue, Corner Ventures, and Latitude. Melio has raised a total of $506 million since it was founded in 2018.

Melio, founded by fintech veterans Matan Bar, Ilan Atias, and Ziv Paz, developed a technological solution enabling small businesses in the U.S. to digitally transfer payments to their suppliers, rather than using bank transfers of checks. Its solution helped small businesses overcome the payment transfer challenges brought about by the Covid-19 pandemic. 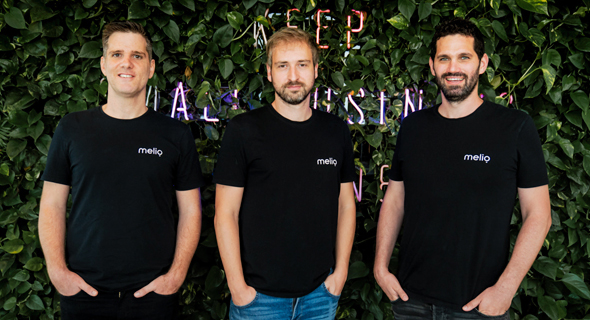 "Our monthly processing volumes grew by 5,000% over the last 18 months and that is also an unfathomable figure for us," CEO Matan Bar told Calcalist. "We went from transactions of $20 million a month last year to $1 billion a month earlier this year. I launched big products during my time at PayPal and never succeeded in reaching this type of growth. We were very lucky that Covid made everything digital and we are helping small businesses who can use us to pay all their suppliers from a single platform."

Bar added that the growth is set to continue due to Melio's partnerships with the likes of Capital One and American Express, which will also translate to the expansion of the company’s workforce. "In January 2020 we were 30 employees and now we already have 420, mainly in Israel and New York. We have opened a new sales and support center in Denver," said Bar. "The main difficulty is in recruiting engineers at the rate we would like. We are trying to retain the R&D only in Tel Aviv and are recruiting as fast as we can. What is attractive about working for us is coping with the challenge of a one-off period of very fast growth. During this massive growth, we were working with just one bank, but very soon it couldn't deal with our volumes and we partnered with another bank and ultimately also signed a deal with a giant bank like JP Morgan."

Bar believes that the surge in the company's valuation is a sign of things to come. "If you look at a company similar to ours, for example, Bill.com, it is valued at $24 billion, and we are growing faster than them and have greater potential. We are in a sector in which most people don't use digital tools and we don't really have competition in small businesses which use checks and their bank."

Melio, which raised $110 million in its last funding round in January, is implementing a strategy that includes integrating with some of the U.S.’s leading financial service and software as a service (SaaS) companies to enable accounts payable and receivable capabilities for their customers by embedding Melio’s technology into their products.