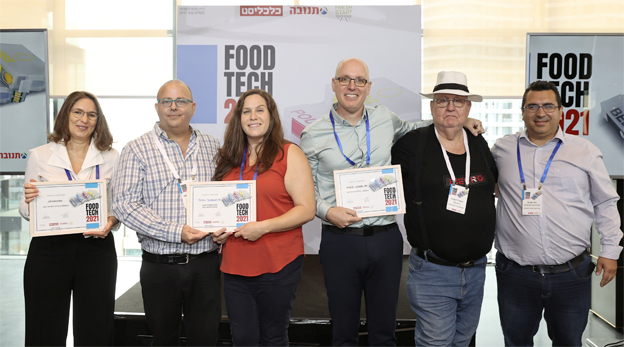 First place winner, ProFuse Technology, and second place Alfred’s Food-Tech both operate in the cultured meat field. “Israel is becoming a powerhouse in the field of foodtech and agrotech,” said Tnuva CEO

Biotech startup ProFuse Technology is the big winner of FoodTech 2021 after claiming first place in the final event of the competition organized by Calcalist and Tnuva. ProFuse will receive up to $100,000 for commercial assimilation of its technology in Tnuva or as an investment, and up to NIS 50,000 for advertising on Calcalist Digital. The Israeli company uses a development from the Weizmann Institute that enables the acceleration of growth of meat and muscle cells, thus helping companies in the cultured meat industry increase production. "The cultured meat sector is one of the most prosperous in the food substitutes industry and is expected to reach a turnover of $630 billion by 2040. One of the major challenges in the cultured meat industry is slow production, which affects production costs. We are working to reduce the costs of a kilo (2.2 pounds) of cultured meat from more than a thousand dollars to only about five dollars," said Dr. Tamar Eigler-Hirsh, ProFuse founder and CTO. According to her, the technology developed by the company is based on six years of research at the Weizmann Institute, in which the distinction of muscle designation was discovered. "We deliver a product in a shorter time, cheaper and with a better texture. Our product is designed to reduce the cost of cultured meat by 30%."

The second-place winner, Alfred’s Food-Tech, also operates in the field of cultured meat. The company is developing a technological platform for the production of textures for vegetable substitutes for cuts of meat and cheese substitutes. "In the cultured meat industry, there is a lack of technology to produce whole cuts, a market of $100 million in the United States alone. It is very difficult to mimic muscle in terms of taste and texture. The technology we invented has a versatility that allows the production of cheese one day, and meat another day, on the same production line. Beyond appearance, we can produce these textures for any field, for example, yellow cheese, pastrami, and more,” said CEO Ronny Reinberg-Moran "It is clear to all of us that there is a sense of urgency in the air. Against the background of the last two years of a global epidemic and climate crisis, we are dealing with fundamental questions about the future of the planet," said Eyal Melis, CEO of Tnuva, speaking at the final event hosted by Amir Kurtz of Calcalist. “When considering the change in the customers’ taste, and what the younger generations are going through, it is clear that the global food production chains have to go through a change and we need to provide more nutritious and healthier food for more people, a population of billions. Innovation is not a buzzword, but a key to achieving all these goals.” "It is estimated that by 2030 the alternative protein sector will reach about $300 billion, and about half of it will be vegetable-based meat substitutes. In Israel, it is expected that within a decade about 15% of the meat and poultry market will be based on protein substitutes," Melis continued. "We all understand that Israel is slowly becoming a powerhouse in the field of foodtech and agrotech. Think about it, do you see a car company today that is not in the electric vehicles field? Look what happened to the computer companies that were not in the right place when the move to the cloud began. Food companies who will not secure a presence in the alternative protein market, in finding solutions for optimal and beneficial nutrition, are companies that will no longer be around. By the end of 2023, Tnuva is expected to reach sales of half a billion shekels in protein substitutes in all major categories, milk, meat, chicken, and eggs,” he concluded.

Third place was won by GreenOnyx, which has developed an autonomous vertical growing system for vegetables that produces optimal environmental conditions. The company’s goal is to offer a new and fresh superfood. "After years of development, we are introducing a groundbreaking technology that allows the food industry to incorporate fresh fruits and vegetables into your food, modular units, and vegetable growing systems. We are the only company that knows how to produce Wanna Greens, fresh super-greens from the Duckweed family. Every little ball is a whole vegetable, in fact still alive, and has a shelf life of four to six weeks," said Dr. Tzipi Shoham, the company’s founder and CEO. 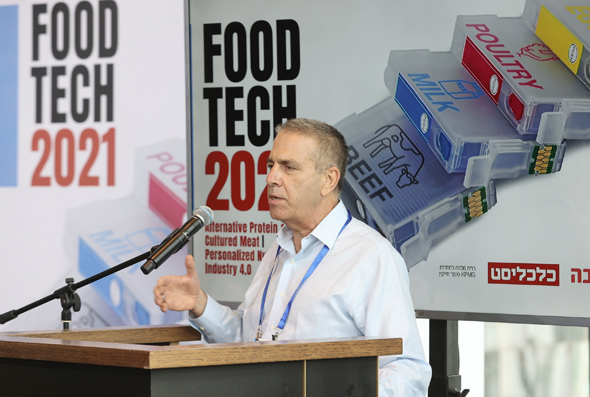 Tnuva and Calcalist’s FoodTech 2021 innovation competition started with dozens of applications, with 11 startups being chosen to compete in its final which took place at the Pop&Pope complex in Tel Aviv. Competitors were focused on technological developments in the foodtech sector in areas such as cultured food and cultivated meat, circular economics, marketing and personalization, supply chain needs, and even industry 4.0. The diversity in the competition attested to the growing dominance of the Israeli high-tech food industry and reflected the impact that such technologies have on the world’s future.