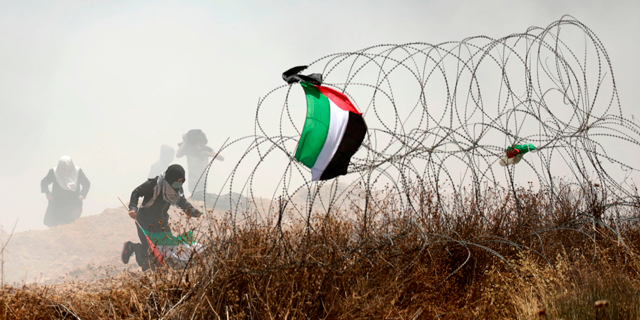 An unmanned aerial vehicle (UAV) by Israeli drone maker Aeronautics Defense Systems Ltd. is being used by the Israeli military to dump skunk-water on protesters in Gaza, according to a video posted to Twitter by the Israeli Defense Ministry Wednesday.

Tens of thousands of Palestinians had been protesting near Gaza’s perimeter fence since March as part of a campaign dubbed the “Great March of Return” which calls for the right of Palestinian refugees to return to their lands in Israel. The protests escalated earlier this week ahead of the inauguration of the American Embassy in Jerusalem. Israeli defense forces have reacted to the protests with live fire, killing as many as 60 people and injuring several thousand, according to a Tuesday report by Palestinian health officials.

Aeronautics develops and manufactures unmanned aerial systems for military and homeland security use, and has over 45 defense, military, and homeland security customers worldwide. The UAV maker is under investigation by Israel police since mid-2017 concerning a deal it signed with a non-Israeli client. An Israeli court has issued a sweeping gag order on all details of the investigation, but media reports that preceded the gag order connected the investigation with an incident in which Aeronautics had allegedly carried out a live demonstration of a suicide drone on an Armenian army post at the request of the Azerbaijani army.

In April, amidst the ongoing investigation, former Israeli Air-Force Commander Eitan Ben Eliyahu stepped down as chairman of Aeronautics and was replaced by former Israeli Navy commander Yedidya Ya'ari.

In a Wednesday filing to the Tel Aviv Stock Exchange, Aeronautics reported a $6 million deal to sell UAVs to an unnamed Eastern European country, set to complete in the last quarter of 2018.

4.
A better answer
While one might think this is crazy, skunk water doesn't kill...no bullets, no gasses that cause you to choke...kind of like the ultra sonic devices used on rodents. Doesn't kill just makes them go away.
3.
Israeli-made UAV Dumps Skunk-Water on Gaza Protes
The mind(s) that conceive such treatment of their fellow human beings must be sick and satanic.
2.
War and Peace
Maybe they should just gun them down, then, rather than be inhumane.
1.
Skunk Water
Now THAT'S Hilarious!