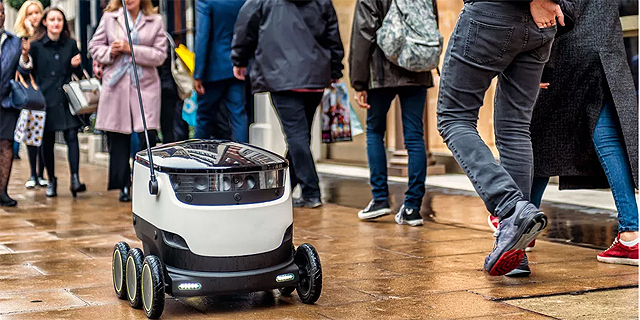 The aim of rolling robots is to make local delivery faster, smarter and more cost-efficient. They are also far less creepy than their airborne drone cousins, writes researcher Dov Greenbaum

Rolling delivery robots are now legal in at least seven U.S. jurisdictions—Arizona, Ohio, Wisconsin, Florida, Idaho, Virginia, and Washington DC. These delivery robots could potentially distribute fast food, groceries, internet purchases, and mail. There are already more than a handful of companies peddling automatic robots on wheels, aiming to travel amongst pedestrians en route to deliver essentially anything to your door, at a time that is convenient for you.

With a combination of mobile technology, specially designed robotics, and distributed local hub systems, the goal of these rolling robots is to make local delivery faster, smarter and more cost-efficient. These robots will be especially valuable in the niche area of last-mile deliveries—a potentially 80 billion dollar market according to McKinsey and Company, a management consulting firm. 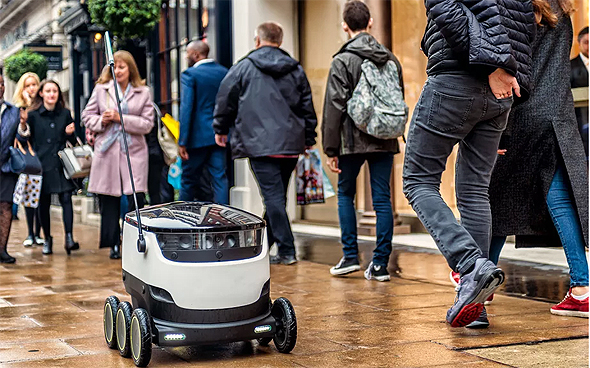 Unlike quadcopter drones, land-based delivery drones are likely safer. They use cameras, radars, LiDAR, and high-resolution maps to navigate around objects and people; they travel at a reasonably leisurely pace, causing minimal inconveniences; and, most importantly, they travel on-ground without the fear of a catastrophic failure that would bring large devices raining down onto the heads of civilians. These robots will also be more environmentally friendly and less conducive to traffic jams than currently employed last-mile solutions such as larger human-driven trucks or even motorcycles.

Still, not everyone is convinced of the benefits of rolling delivery robots. A San Francisco city supervisor recently proposed legislation to keep the machines off of pedestrian paths citing alleged threats they pose to public safety. Others are concerned that armies of these bots may flood the streets and sidewalks crowding out pedestrian traffic.

These naysayers notwithstanding, most people are likely to be in favor of delivery bots depending on the exact nature of the device. For example, these robots could either be wholly autonomous or might simply follow a delivery person, carrying the packages for them, perhaps causing less consternation amongst current bot-agnostics.

There are also a number of potential form factors under consideration that might change people’s minds. While we might be ok with copier-size wheeled vehicles weaving in and out of pedestrian traffic, the same cannot be necessarily said for the four-legged dog-size devices proposed by San Francisco-based robotics company Unsupervised AI. Although the design might be technologically advanced and able to overcome obstacles that might hinder the wheeled versions, they are objectively scary looking. The scariness factor also hasn’t stopped Savioke, a Silicon Valley-based startup, from successfully placing Dalek-like robots in various hotels around the world. Perhaps they are banking on triggering only the rare Whovian, with everyone else simply oblivious to their insidious-looking design.

The design of the devices is not the only potentially disconcerting aspect. Without proper standards and encryption, the devices might be hacked and used for nefarious purposes. Alternatively, they could be used as Trojan horses to facilitate the movement of contraband products, or worse. Additionally, cameras on these devices will add to the already pervasive collection of visual data by the state and other operators, or at least the fear thereof. Not to mention all the tort liabilities relating to malfunction of the device or from a traffic accident it may get involved in.

Some have called for special insurance or robot taxes for these devices to account for all of their negative externalities like job losses, increased sidewalk congestion, or the need for more sidewalk upkeep due to increased small vehicle traffic. But that might only solve the legal and economic concerns.

Just like Skype allowed people to limit actual physical interactions by providing reliable video chats, there is lingering anxiety that robot deliveries may just be one more nail in a growing anti-social coffin, cutting off yet another human interaction, the delivery guy, from our increasingly isolating digital society.

Dov Greenbaum, JD-PhD, is the director of the Zvi Meitar Institute for Legal Implications of Emerging Technologies at the Radzyner Law School, at the Interdisciplinary Center in Herzliya. Amit Lieblein, a student at the institute, contributed to the research and writing of this article.